An examination of how using Wikipedia as a narrative medium can provide novel approaches to interactivity and non-linearity.
Joannes Truyens
Blogger
August 05, 2020


Hypertext fiction is characterised by networked nodes of text making up a fictional story. There are often several options in each node that direct where the reader can go next. Unlike traditional fiction, the reader is not constrained by reading the fiction from start to end, depending on the choices they make. In this sense, it is similar to an encyclopedia, with the reader reading a node and then choosing a link to follow.

The above quote is pulled from the Wikipedia entry on hypertext fiction, a subset of interactive fiction (or IF) where players have a measure of control over the story by arranging the order in which they read the constituent parts of the text. The only interaction available to players is which node to pursue next, affording a degree of non-linearity in how the story is assembled. This approach can make setups and payoffs more dynamic; what is foreshadowing to one player may be read as revelation by another.

Wikipedia compares hypertext fiction to browsing an encyclopedia, so what happens when you just go for it and use Wikipedia as the medium for a story? How do players discover a fictional world by diving into that world's Wikipedia? What kind of story justifies the use of Wikipedia as its medium to ensure that content and form back each other up? These are questions I'm trying to answer with the development of Neurocracy, a game that presents a sci-fi story through Omnipedia, the fictionalised Wikipedia of the year 2049. 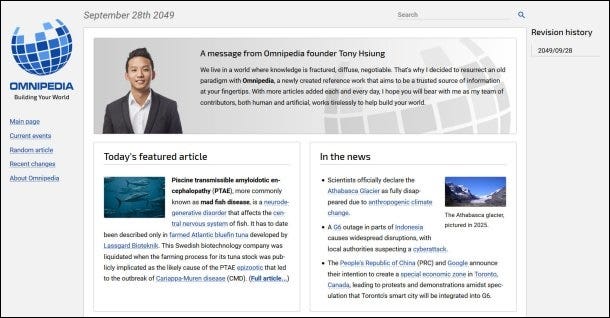 Pinning down Neurocracy as a game is a generous notion; the use of a diegetic, in-universe document as a narrative device sort of makes it an epistolary novel as well. The document in question being Wikipedia simply calls for more interactivity than a series of letters or diary entries would, even if that interactivity is limited to reading and clicking links. So is Neurocracy a game or a novel? The answer is yes, it is.

It's certainly not a stretch to argue that Wikipedia is a narrative medium in its own right. There's the so-called wiki rabbit hole, which provides a learning pathway that readers can take to navigate from topic to topic. With Omnipedia specifically designed to match Wikipedia in style and layout, Neurocracy's grammar of interaction is already known to anyone who has ever navigated Wikipedia, eliminating the need for a manual or lengthy tutorial.

On Omnipedia, players have access to various hyperlinked articles that detail the characters, organisations, technologies, and events relevant to the story and themes of Neurocracy. When browsing these articles, players never learn outright what transpires between the characters, what their true actions or motivations are, or who did what with/to whom. With only the "public" information on Omnipedia available, players essentially deduce a story from the worldbuilding rather than the other way around. There is no greater narrative force than imagination.

That's where Neurocracy's interactivity lies: players tell themselves (and others) the story by filling in the blanks between the lines and drawing connections between various clues peppered throughout the articles. In that respect, Neurocracy also introduces elements from alternate reality games (or ARGs), which depend on players working together to share discoveries and solutions, and create resources for others to follow.

The premise of browsing a futuristic Wikipedia is easy to grasp, but what narrative mechanics does the medium of Wikipedia afford in the context of interactive fiction? Here's how Neurocracy translates two specific functions of Wikipedia: the revision history and the article previews. 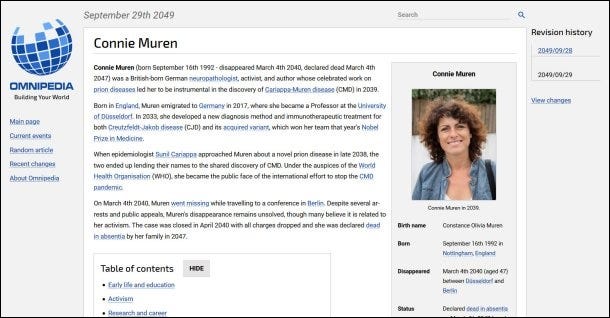 Wikipedia's editing backend includes a revision system that allows contributors to keep track of edits made to each article. Omnipedia features a similar system used to serialise Neurocracy's release model, with most articles published gradually as the story moves from date to date. This ensures Neurocracy is not a one-and-done game, with player engagement stretching over a longer period of time.

The initial release of Neurocracy features three available dates in the year 2049. A first set of articles is available across those three dates, with players able to navigate inside and between them. Switching dates anywhere on Omnipedia shifts the entire website to that date, and each article comes with a View changes function to check any edits against the preceding date.

The next "episode" adds a fourth date to the revision history along with a set of fresh articles and the appearance of an inciting incident in the In the news box on Omnipedia's main page. As additional episodes and articles are released (and existing articles are updated), the story progresses across consecutive dates, simulating bouts of frantic Omnipedia edits to reflect an ongoing crisis that captures the attention of the world of 2049. As such, each new episode reveals a snapshot of the events of the last 24 hours.

The serialised format allows for the storyline to be subtly adapted to player reactions and interpretations while in progress. A single sentence or update in one article may cast another in a wholly different light. This also implies that players who first access Neurocracy after the serialised aspect has concluded will have a different experience. With all articles immediately available, it becomes an in medias res story where players have to work backwards, making what has been deleted over time just as important as what's been added. 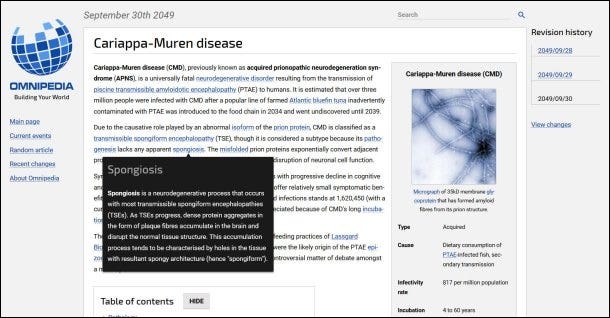 Since it would be infeasible to replicate the sheer expanse of Wikipedia's content for its 2049 counterpart, the majority of Omnipedia's internal hyperlinks are limited to pop-ups which appear when players interact with them (either by hovering the pointer over them on larger screens or tapping them on smaller screens). This mimics Wikipedia's article previews, which work in a similar fashion.

These pop-ups are primarily used to briefly illustrate present-day concepts that already have their own Wikipedia articles, but they also tie into the serialised aspect of Neurocracy. Full articles that are released in later episodes can and do feature as pop-ups in earlier episodes. This makes each pop-up that communicates a fictional character, concept, or idea into a potential teaser, as it has every chance of being expanded into a full article in a later episode.

An added bonus of pop-ups-as-teasers is that the distinction between clickable hyperlinks and non-clickable pop-ups no longer overtly signals what matters and what is inconsequential to the story of Neurocracy. There's also the potential for subplots playing out in their own articles and building over time.

Additionally, once the main story of Neurocracy has concluded, further articles from guest writers can be released in a manner similar to downloadable content, with pop-ups added and expanded to full articles that tell new stories in the world of 2049 (akin to an anthology series or an expanded universe). 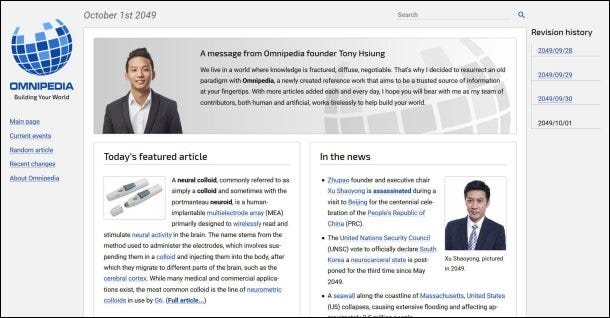 Of course, this format for interactivity is only as strong as the world and story explored through that format. Neurocracy posits a near future where a pandemic of a fictional infection known as Cariappa-Muren disease has intersected three current and developing trends: surveillance capitalism, biosecurity, and consumer-grade neurotechnology. This future was conceived and written before the ongoing COVID-19 pandemic started accelerating that intersection for the first two trends, so the world of Neurocracy now jumps off from two pandemics instead of one.

The Wikipedia format acts as an omniscient narrator and aids in demonstrating the interconnected political, social, cultural, technological, and economic aspects of what has happened, and what is happening, in Neurocracy. That's why each Omnipedia article exists as a link in a chain, containing hyperlinks both to and from at least one other article and making it impossible to land on an article without a way forward or back.

Early playtests have indicated that Neurocracy manages to deliver the possibility space as outlined in this blog post, with players diving into Omnipedia, coming together to debate theories, and eagerly looking forward to more articles being released. If you're interested in taking part, please do join the Neurocracy Discord server!