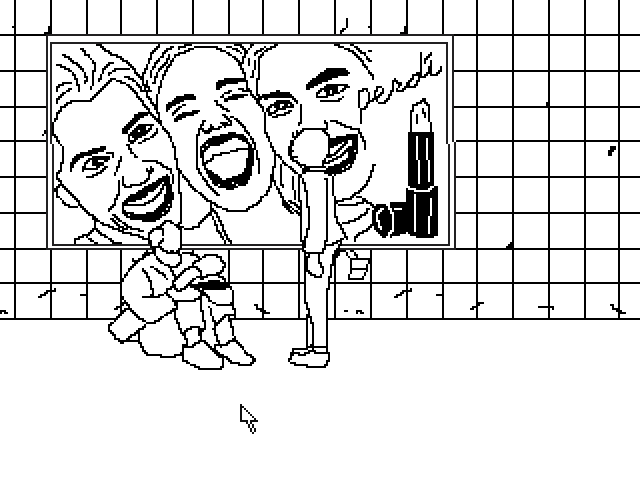 I participated in Ludum Dare 33 over the weekend. More precisely from Friday at 6 PM PST to Monday at 8:20 AM PST. I’ve worked in video games for over a decade and made little games in Flash and Director a long time ago, but it isn’t until a Twine game from last summer that I returned to making my own games and interactive stories. I saw LD as an opportunity to keep trying and to leverage my current desire to create visual art.

The theme--not revealed until Friday--was “You are the Monster.” I was naturally uninterested in a literal interpretation of the theme. I began thinking about a story and design that evening and continued pondering in my notes until Saturday night. There were a number of design ideas before settling on one, including a concept involving a little girl in a hospital waiting room whose brother had a mysterious accident. (I really liked this one.) In hindsight, this time spent on design ate up too much development time, i.e. time that should go to getting a functional game.

I was committed to making an adventure game after my last jam experience with Twine and my recent work in the genre. Twine is great, but I wanted more art and interactivity for this one. Just walking around in an environment with no need to click on anything if the player wasn’t in the mood. This removed the possibility of using a game development tool called Construct 2, which I have experimented with for a few years. It’s a wonderful tool that makes it easy to script some kinds of games, but not point-and-click adventures.

My next option was Adventure Game Studio, with which I was also familiar from previous experimentation. The greatest limitation of AGS is it only exports for Windows PCs, so players on other types of devices would be out of luck. I really wanted to make it playable in a web browser (which Construct 2 allows with its use of HTML5). So, I also spent a large part of Saturday trying decide on a engine. I finally found a tool called Adventure Game Engine that exports to web browsers using Unity, but I was too unfamiliar with the engine to get what I needed in 1 day. I plan to return to AGE at a later date if I decide to make another adventure game.

So, by Saturday night I had a design, an engine, and a rudimentary room with a character walking around. I technically had until Monday to finish, but due to work I really only had until Sunday night.

I did minor setup work in AGS on Sunday morning and then charged into Photoshop to work on the visuals. Art and animation was a lot of fun. To see your idea come to life is amazing, which is true of any form of expression but particularly exciting to me when it’s characters and environments in a game. Animation is another area I’d experimented with many years ago and I was happy to try it out again. The minimalist white and black art I’d created just to test the AGS tool became the primary visual style, and I believe the funky animation benefited from the hand-drawn Microsoft Paint look. I spent Sunday morning and some of the afternoon working solely on art and animation in Photoshop. But as I once again learned, it’s a classic mistake to work on the art before your game’s scripting and logic are in place.

Scripting and logic was a bummer. Some of it was painless thanks to the pre-defined behaviors and tools in AGS, but I felt pretty bad by the end of Sunday on account of some advanced logic hurdles that I could not quickly surmount. In the end, I was missing the logic for multiple endings (merely a different message at the ending screen), NPC animations didn’t play properly, and the game crashes when the player reaches the end. It is also missing all sound, which for my game would have been footsteps for the player character and a violin track for one of the NPCs. I considered not even submitting what I had, but I felt better about it on Monday morning. I’m happy with the result considering none of it existed when I woke up on Friday morning. It’s just a step, after all, like anything else I’ve created.

My biggest takeaway from this experience is that I enjoy visual development. I’m exploring art and I’ve been worried that exploring something like this at age 32 is going to be difficult, particularly if I want to pursuit it beyond a hobby. I’m going to keep exploring and take classes. Hope something comes of it.

The (not quite final) game is here, called ‘p good’.