How Mass Effect 2 and Heavy Rain made me enjoy it when I lost.
Adam Bishop
Blogger
May 15, 2010

If we talk about the idea of losing "permanently" in video games, the typical response is that players would never accept that kind of treatment.  Oh sure, some people play roguelikes, but that's just a niche within a niche.  But what if we're thinking about "losing" in too narrow a sense?  What if a player could fail at a game's objectives and still be allowed to continue without a game over screen?  What if failing was built right into a game's design?

Luckily for us, two games released earlier this year have done exactly that, to varying degrees.  In Mass Effect 2 there are missions that the player can fail to be successful at without having the game end, and in Heavy Rain the player can not at any point completely lose and have to start again (to the best of my knowledge, anyway).  I'm going to look at how these very different games approach the concept of losing and explain why it made them both more engaging play experiences for me.  I'm going to avoid major plot spoilers here, so this should be safe reading for anyone who hasn't played these games.

Mass Effect 2 - Loyalty Missions
A big part of Mass Effect 2 involves side missions for each of the characters who you recruit.  They all have some sort of request of you, usually to take them to kill someone.  The most interesting thing about these side missions to me isn't that they do a good job of character building, which is their primary purpose, but that some of them can be failed outright without requiring the player to re-do them.

There are two ways to fail at these missions.  You can die during combat, which results in a standard action game "Game Over" screen requiring a reload to the last checkpoint.  But they can also be failed narratively, and when that happens the game alters accordingly and lets you keep playing.

This guy was soooo not pleased with me


The results are not major (you fail to gain the character's loyalty, which doesn't come into play much until the game's last little stretch), but they still felt profound to me.  I'm used to action games that not only let me play the powerful, indestructible hero, but require that I play that part.  It's jarring and quite involving when you realise that while, yes, you can play the hero, you can also mess up.

In most games if your character fails to play the hero it's because the story pre-ordained that you would fail (see: the "you got captured" scene in every JRPG ever).  That disconnects the player from the character because what the player actually does and what the game says they have done don't line up.  But on the loyalty missions if I messed up the character messed up.  That pulls me into the game world much deeper.
Heavy Rain - Character Death Seperate From Player Death
One of the more heavily advertised features of Heavy Rain prior to its release was that main characters could die and the game would keep going without them.  Because this is so contrary to the way we normally play games, most people were curious but also a bit confused as to how this would play out.

Further, while some scenes in the game can only play out in one way, there are other scenes that play out in varying ways depending on what the player does.  For example, you can fail to gain important information that the character you're playing as needs in order to track down the killer they're chasing, making later sections of the game more difficult or even impossible.  Unlike most games where you just keep at something until you get it right, in Heavy Rain your failures can come back to haunt you.

This added a great deal of tension to the game for me, because I was constantly thinking about what might happen later if I didn't get it right now.  Heavy Rain has come under a great deal of criticism from some commenters because they feel like it is less interactive than most games.  But I think this element of Heavy Rain makes it more interactive than other games.  Most games tell me what happens and then it's up to me to find a way for my actions to agree with that.  In Heavy Rain my actions dictated what happenned and the game worked with me. 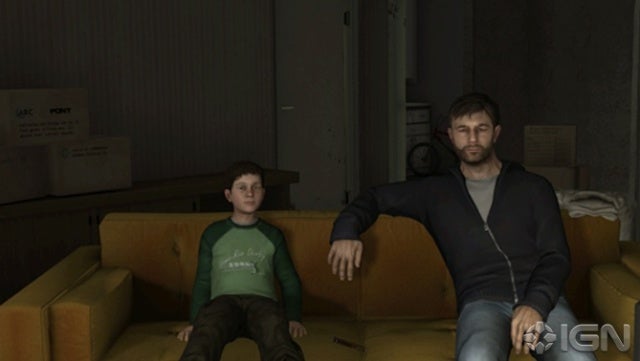 One, both, or none of these characters may be dead at the end of Heavy Rain

There is a belief among many people in the game industry that without the fear of failing and retrying, a game has no tension and feels boring. In my experience, this is not true.  I'm not "afraid" of failing and having to retry so much as annoyed by it.  My time is precious, and I don't like to feel like a game is wasting it.  But if Heavy Rain has no "Game Over"s, doesn't the whole thing feel pointless?

On the contrary - because I could fail and have to live with the consequences of that for the rest of the game, the tension was increased dramatically.  Every time a character was in danger it felt like real danger because there were genuine consequences if I messed up.  By taking out the "Game Over" I started to actually care about what happenned to my characters.

Sports Games
OK, I'm actually going to briefly talk about a third kind of game that incorporates losing as a viable (even unavoidable) game mechanic.  The reason I'm doing this is because I think that the reason that I not only accept, but want to lose in sports games is part of what makes it seem appealing to me in other genres as well.

I like losing at sports games.  I don't like losing all the time, but I do like it when it feels like I have to work to get wins.  The main reason that I don't mind losing at sports games is that it always still feels like I'm progressing.  My players have still earned stats, I'm still one game closer to the playoffs, I'm one game closer to being able to re-work my team in the off-season . . .

In short, I don't mind losing in sports games because it's still a kind of progress.  And that's why being allowed to lose in other kinds of games seems to work so well too - because it's more important to me that a game world recognises my input into it than it is for me to prove how great I am.  Yes, losing can be annoying and frustrating, but it can actually be rewarding too.  The key is to make sure that failure is a part of the game rather than apart from it.