Localizing A Game Into French—Which Variant Should You Choose?

The French spoken in France is quite different from the variant spoken in North America—Canadian French, or QuÃ©bÃ©cois. Here is what you should know about both.
Damien Yoccoz
Blogger
April 03, 2020 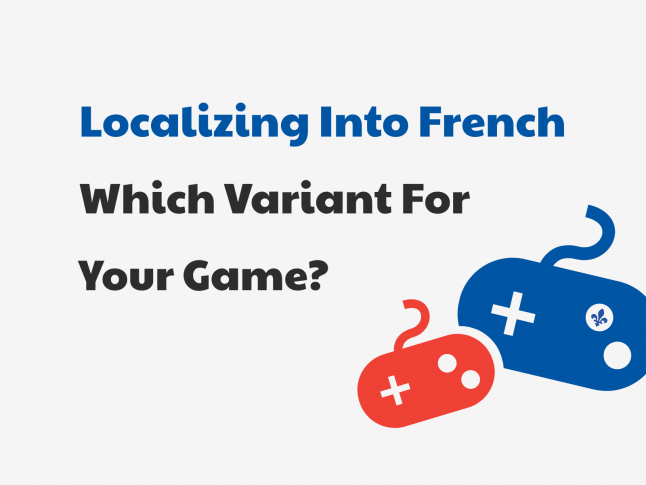 So, you’re making an awesome indie game, and now you’re thinking about localizing it into French?

Awesome idea! There are 275 million people worldwide who speak French, and some people even say it could be the most spoken language in the world by 2050.

The French variant spoken in France is quite different from the one  spoken in North America—Canadian French, or Québécois.

So here is what you should know about both versions of the language before you make a plan to localize into French.

1 - Not all words have the same meaning

Some words may be spelled the same and sound similar, but the meaning will differ according to who you are speaking to.

This might turn out to be either silly or offensive, depending on the word.

For example, the word “blonde” in Canadian French can mean someone with blond hair, or someone’s girlfriend, whereas it only means “blond hair“ in France.

But here’s a more offensive example. The expression “gosses,” in France, is a slang term for “children,” but in Quebec it’s slang for testicles. That’s not a mistake you want to make!

If you take a look at American English and British English, some slang terms will be different, like crisps and chips, but in general both Americans and Brits will be able to understand each other.

But it’s not the same at all for French slang.

If your game is set in a modern setting and uses slang—especially humour—be aware that the terms you use will differ greatly depending on what type of French you’re localizing for.

For example, the standard French term “meuf” is slang for “woman,” and although most Québécois people will understand the meaning, they don’t use this term at all. But other slang terms may be completely foreign. “Je kiffe,” which is a French expression you would use to express that you really like something, is completely foreign to most people outside of France.

If your game uses no slang and has a more formal tone, you should be aware that French expressions tend to be more proper, as long as no slang is involved.

For instance, if it’s going to rain, Québécois people will say “Il va mouiller,” but anywhere else in the world the proper way to say this in French would be “Il va pleuvoir.” French Canadians know what “Il va pleuvoir” means, but they typically express it differently.

However, if you were to choose the Québécois version, French speakers anywhere else in the world might be confused! To them, it would mean “it’s going to wet,” which of course makes no sense.

Here’s another example: supposedly, the proper way to say “driving the car” in French is “conduire la voiture,” but in Quebec, people would say “chauffer le char.” If you were to translate that literally, it would mean “heat the cart.”

4 - CERT differences are important too

When you’re getting your game certified, each region has its own sets of laws.

Canada uses the Entertainment Software Rating Board (ESRB), just like the United States and Mexico.

However, France uses the Pan European Game Information (PEGI). So no matter which French dialect you choose, you’ll have to go through different CERT processes if you want your game to be sold in both areas.

With all that said, what’s the best way to decide how to handle your French localization?

Here’s the first tip: if your game doesn’t use slang, and you ONLY have text with no voice-over, stick to a general FR_fr localization and you should be good to go. Most French speakers across the world will understand this version.

However, if your game does use slang terms and/or voice-over, you should localize for both French variants if it fits within your budget and scope of work.

And if it doesn’t? It’s time to get real about which audience is most likely to play your game.

If players from both France and Quebec are important to you, and you can only afford to localize for one audience, then go for FR_fr.

Why? For one, many French Canadians also speak English, or at least understand it. This audience is also much smaller, so you have a better chance of selling more copies to the larger France population.

Keep in mind, however, that if your game is slang-heavy, you will most likely alienate one audience if you only localize in one dialect.

One way to minimize this, especially if you are using voice-over, is to make sure your voice actors don’t go too heavy on the accent.

The standard French and Québécois dialect sound very different from one another, and when using casual language, both can have heavy accents that are difficult for the other party to understand. This is especially true if your voice actor is speaking quickly.

Despite the standard French dialect being more “global,” you should consider localizing into Canadian French if Québécois players are important to you—and if you can afford both.

7.3 million people in Canada have French as their mother tongue, and 61% of Canadians define themselves as gamers.

The thing is, the Québécois dialect is a huge cultural part of the francophone Québécois identity, and it matters to them.

So if you have voice-over dialogue, using Quebec French is an important part of getting these players to really connect with your game.

It all depends on how important this audience is to you!