Here we go again! How to prepare yourself for a conversation about violent video games. Read the research, watch the videos, share with your friends!
Mark DeLoura
Blogger
February 28, 2018 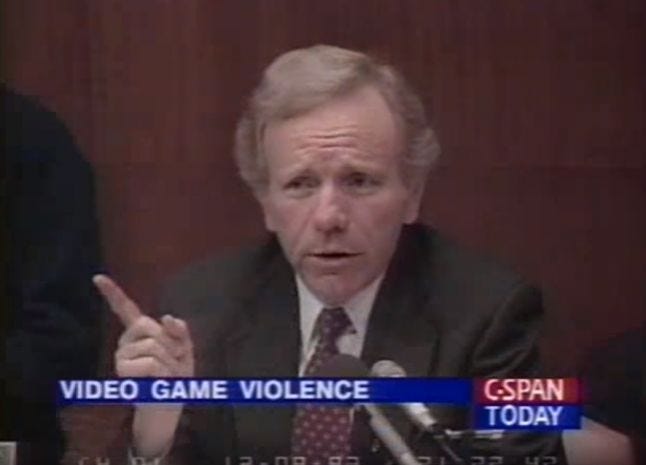 By now you've heard it again: that familiar sound of a politician coming out against violent video games after a horrific mass shooting. This time it started with Kentucky Governor Matt Bevin, and was followed by President Trump. A Rhode Island State Representative, Robert Nardolillo, announced plans to raise taxes on violent video games to pay for mental health and counseling in schools.

Of course, the research shows no correlation between violent video games and the increase in mass shootings in the U.S. But the rise of this conversation again isn't about facts, it isn't about research. It's about politics.

We've been having this very conversation, or something close to it, for over 25 years. In Senate hearings in 1993 and 1994, Senator Joe Lieberman questioned game industry executives and highlighted violent video games using clips from Mortal Kombat and Night Trap. In 2013, Vice President Joe Biden held a White House meeting on video game violence as part of a series of gun violence meetings after the Sandy Hook massacre. Here we are in 2018, talking about violent video games again.

Politicians pursue these conversations because of the concerns they hear from their constituents. Moral panic about new technologies is not uncommon -- witness the flood of concerned articles about smartphone overuse, for example, or you can flip all the way back to Plato and read his concerns about the terrible impact learning to write would have on people's willingness to exercise their memory. When I was a kid the concern was all about watching too much television: "Your eyes are going to fall out!" To some extent the technologies that exist when we are born always seem "normal" to us, and as we get older there's a natural tendency to fret about the terrible things new technologies must be doing to the modern generation. You've heard the signs of it: "80's music is the best, music today sucks", "back in my day life was so much better", and "get off my lawn!"

If we want to make change happen quickly, we must address this tendency, and that lands the responsibility for educating others squarely on our own heads. The research on violent video games has developed, the facts have become clear, but that doesn't quell the moral panic. So what should you do, as a game developer? What do you need to know?

Read the articles. First learn more about the issue through some of the great articles written this past week, and their links to research: Greg Toppo's piece in USA Today, Erik Kain's article in Forbes, Katherine Cross's story in The Guardian. Even Breitbart has a good article, written by Allum Bokhari and Charlie Nash.

Watch some videos. Watch parts of the 1993 and 1994 US Senate Committee hearings, especially the opening statements from Senator Lieberman, and from Howard Lincoln of Nintendo. The opening statement from Vice President Biden at the 2013 White House meeting is also great context setting material.

Explore some longreads. To understand the background more deeply, pick up one of the excellent books on the topic. I recommend wholeheartedly Grand Theft Childhood, from Cheryl Olson and Lawrence Kutner. I also found the book Moral Combat, by Patrick Markey and Christopher Ferguson, quite valuable. Next, check out the decision from the landmark 2011 Supreme Court case Brown v EMA, in which the court held that video games, including violent ones, are protected speech under the First Amendment.

Examine the research. There is a LOT of research on the effect of violent video games out there. Here are three particularly strong pieces that I found useful while working at the White House:

Educate yourself! Read the research, watch the videos, and share what you learn with others. Now you have some strategies that will help you with the next moral panic: whether that's virtual reality, artificial intelligence, autonomous vehicles, or blue bionic octopi from space!