Here is a mini-research on games on Kickstarter at the mid-year point. On top looking at the Games category and the video games and tabletop games sub-categories, I am also throwing in a few numbers on Kickstarter overall.
Thomas Bidaux
Blogger
August 01, 2017

As a side note, it was interesting to see that our Campaign Review service has been very popular this year, and I updated the page about it.

A few disclaimers on this article and the data:

Before we get into the numbers, I wanted to highlight a few things that have happened in the first half of the year:

The last one I wanted to highlight as I sometimes find my research in media discussing Kickstarter, and they came up quite significantly in relations to that last announcement. But to the numbers, that’s what is of interest here. 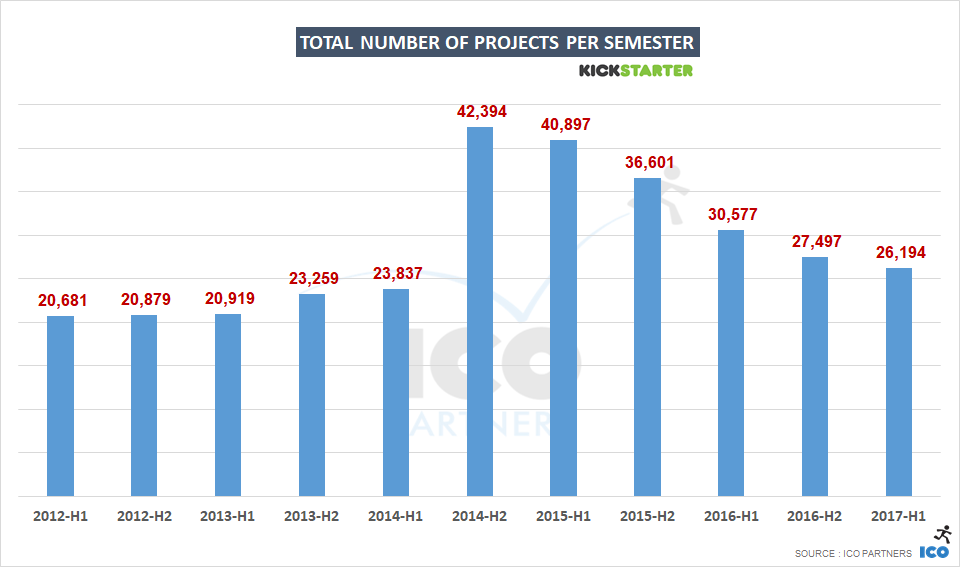 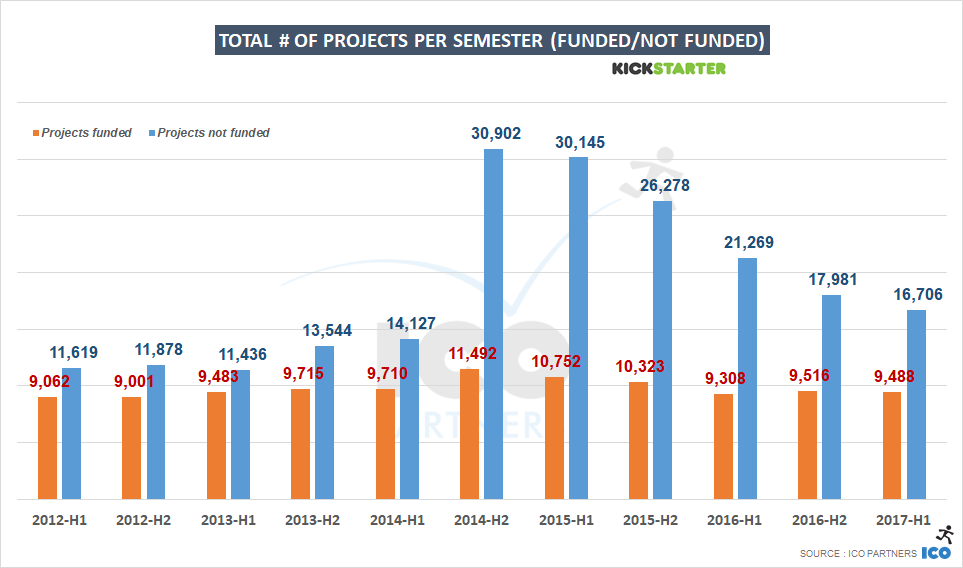 As I have mentioned in the past, the Potato Salad campaign had a huge influence on the number of projects submitted on Kickstarter. If you are wondering about that sudden spike in the second half of 2014, that’s why.

Overall, we see a decline in the total number of projects launched on the platform, on quite a steep curve. However, the number of projects that get funded is seeing a very small decline in comparison. It’s also important to note that there are indications that the second half of a year usually performs better than the first half. And that’s usually true across all the categories.

You can see this effect a bit in the total amount of money raised by successful projects: 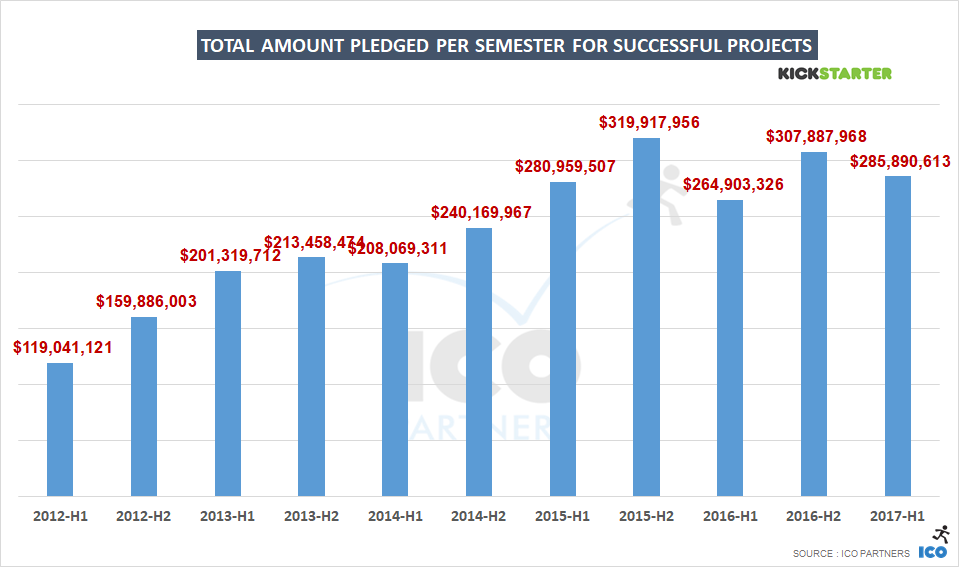 Despite the slight decline in projects, the first half of 2017 has been the best first half for the platform historically. It is very hard to predict how the second half will go, but it is likely that it will outperform the second half of 2015, making 2017 a record breaking year, improving from 2016.

Quick look at the Games category

I will share these numbers and chart as is. The analysis of the two main subcategories are much more telling of the current trend. 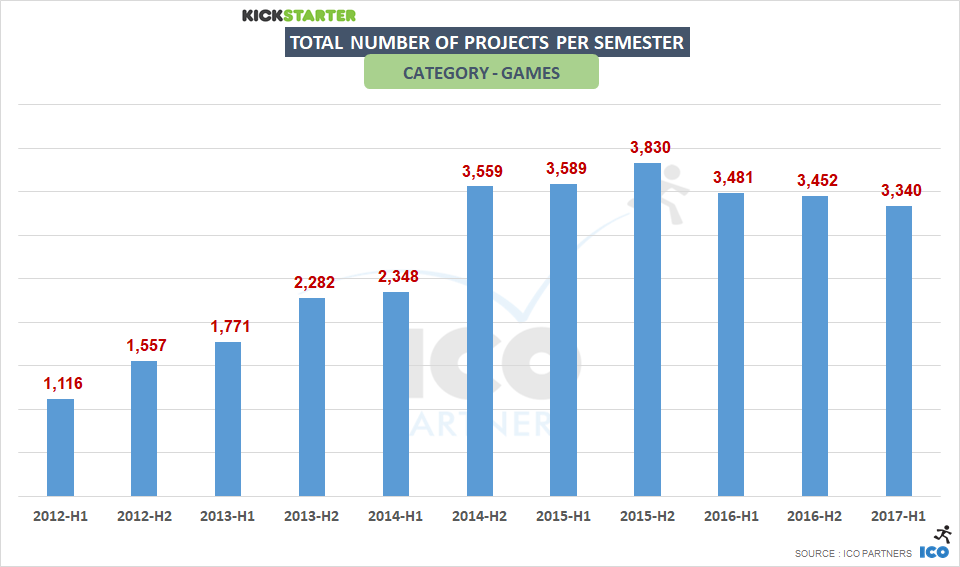 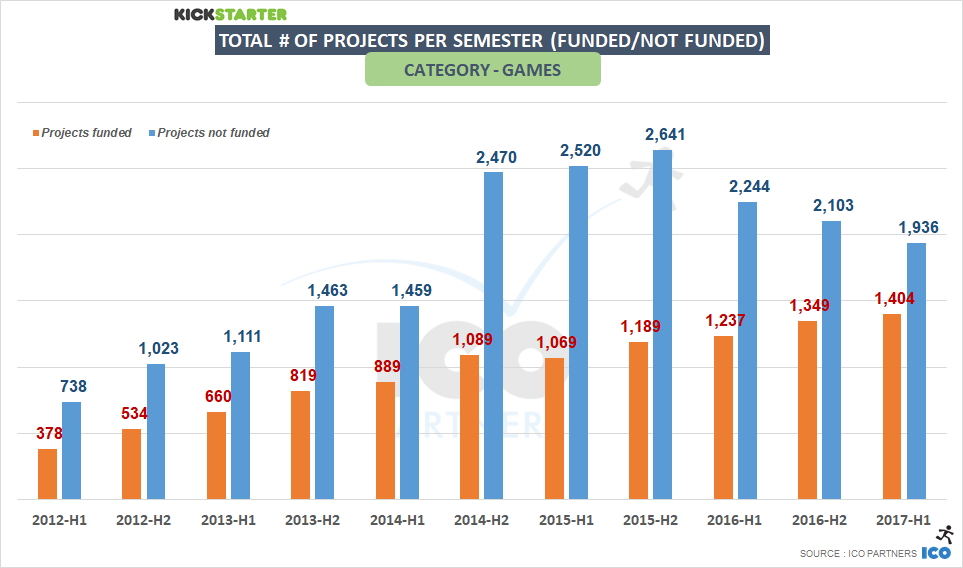 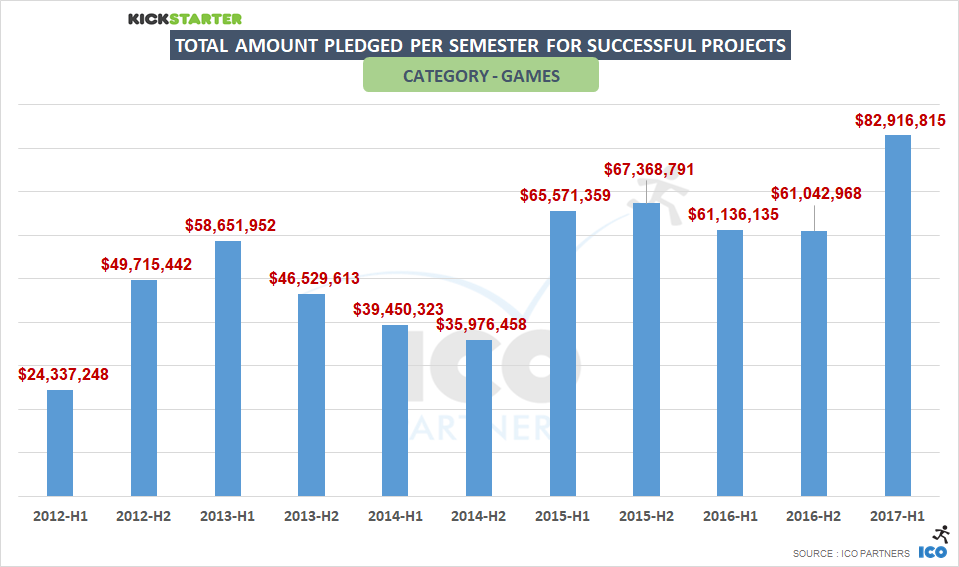 Video Games – at a stable pace

You have observed the growth of the Games category? Well, video games are actually not growing. 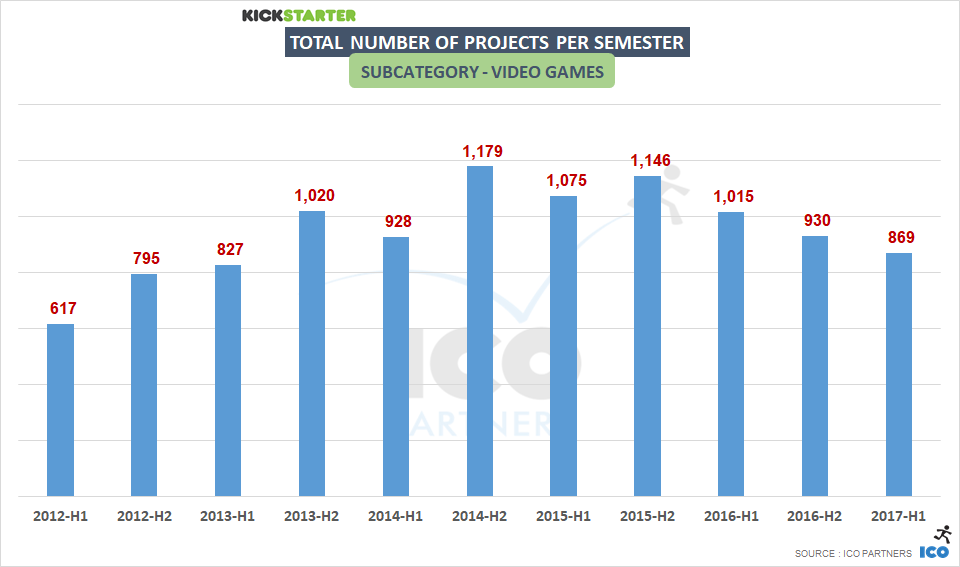 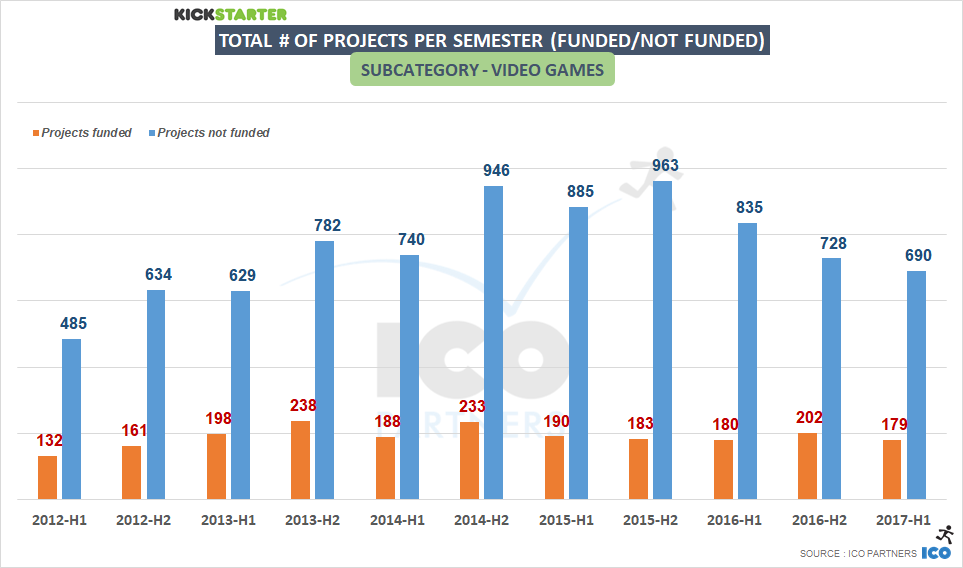 Video Games are keeping the same rhythm as the previous year, with roughly 30 projects per month getting funded. The second half of the year should probably see a few more projects funded than have been so far in 2017, if it follows the pattern of previous years. 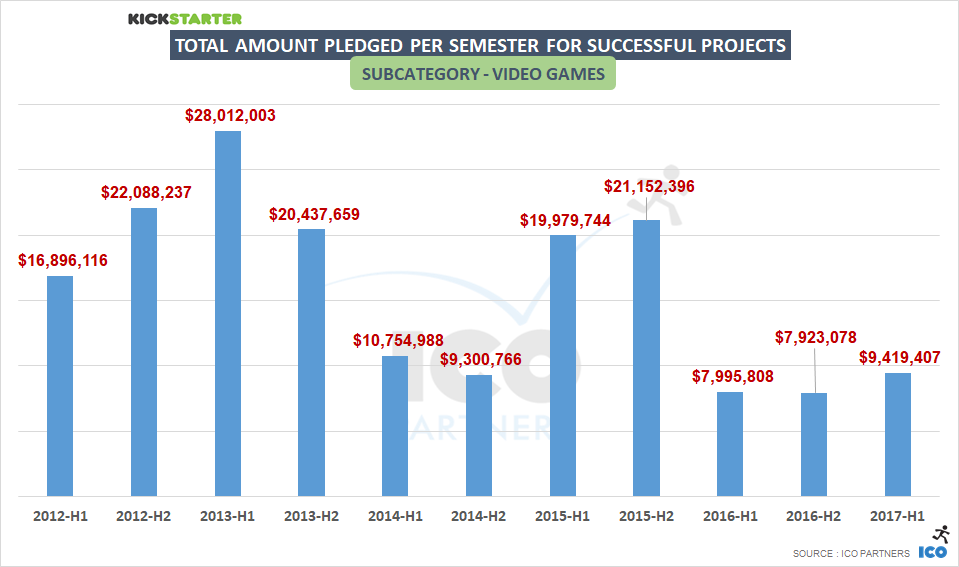 As seen in the past data analysis, the Video Games subcategory is very dependent on hits when looking at the total amount of money raised. In that sense, the first half of 2017 has been the best semester since 2015. And yet, this is a far cry from the best semesters in that subcategory.

A stable number of funded projects, a growth in the total amount raised, despite Kickstarter having lost its novelty years ago now, it is still a platform that is consistent as a source of funding for games, the same conclusion drawn on the blog post from the beginning of the year. 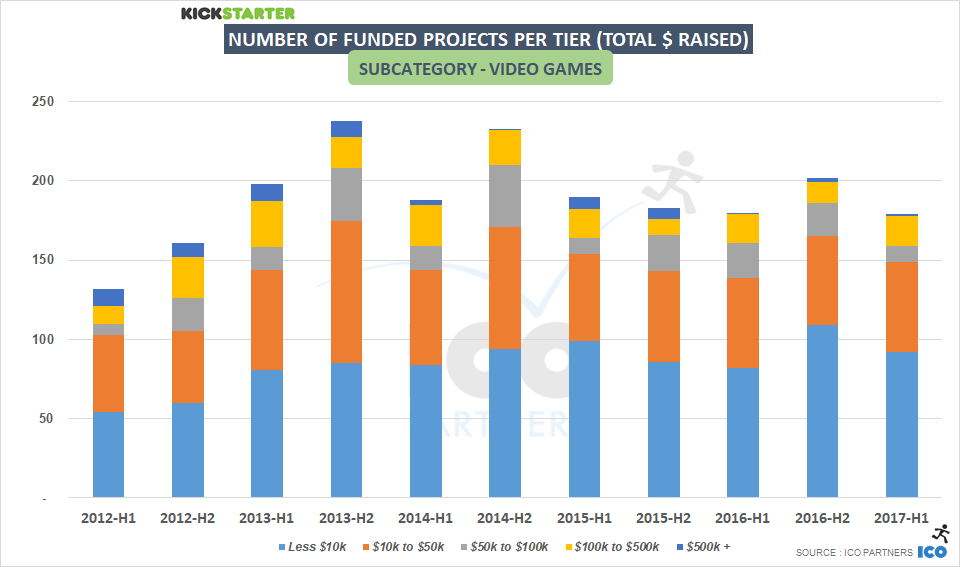 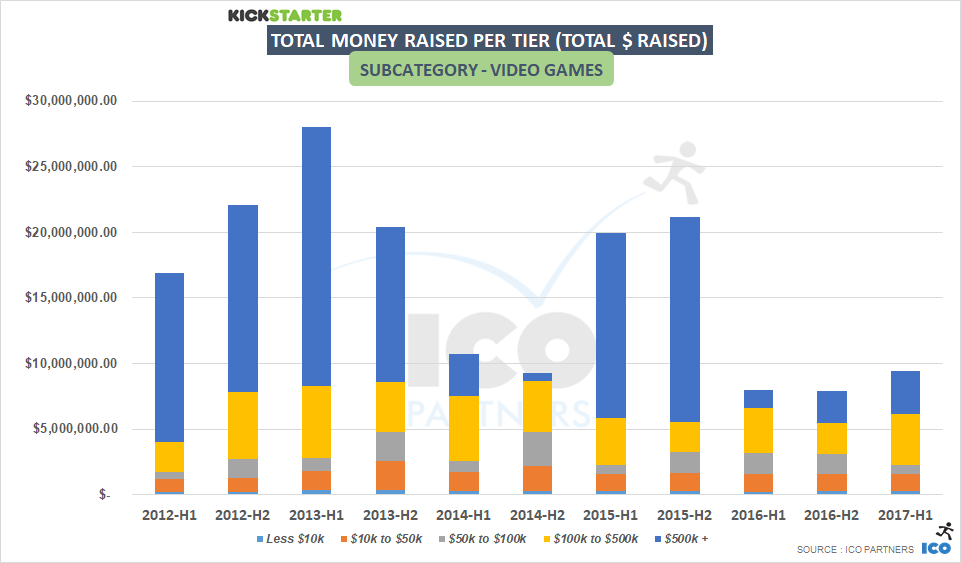 An interesting evolution of the numbers when looking at projects tiered by amount raised, there is a growth of the number of projects raising between $100k and $500k recently. It seems this is a range of funding that is more accessible than it used to be, and could be where Kickstarter could grow its Video games subcategory.

The crazy growth of Tabletop Games

If we can’t see how the Games category can be performing so well from looking at Video Games, it probably means that Tabletop Games are doing incredibly well. That is quite the understatement: 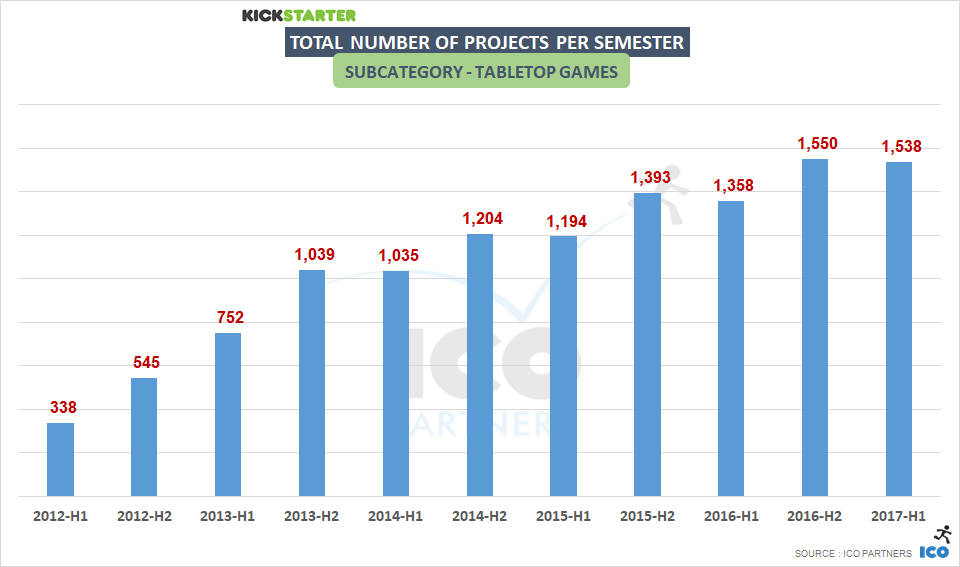 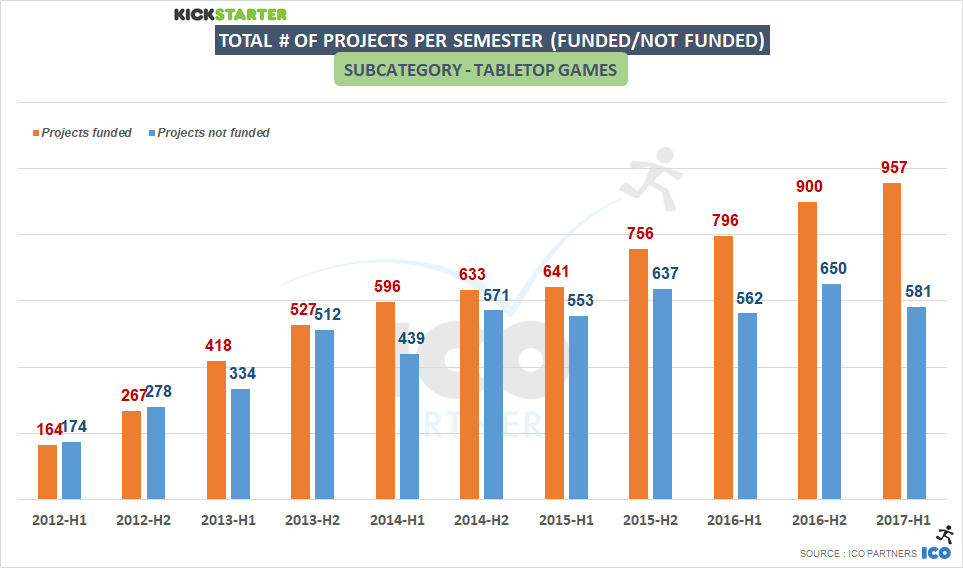 Looking first at the number of projects, it is obvious that this subcategory of projects is bonkers: 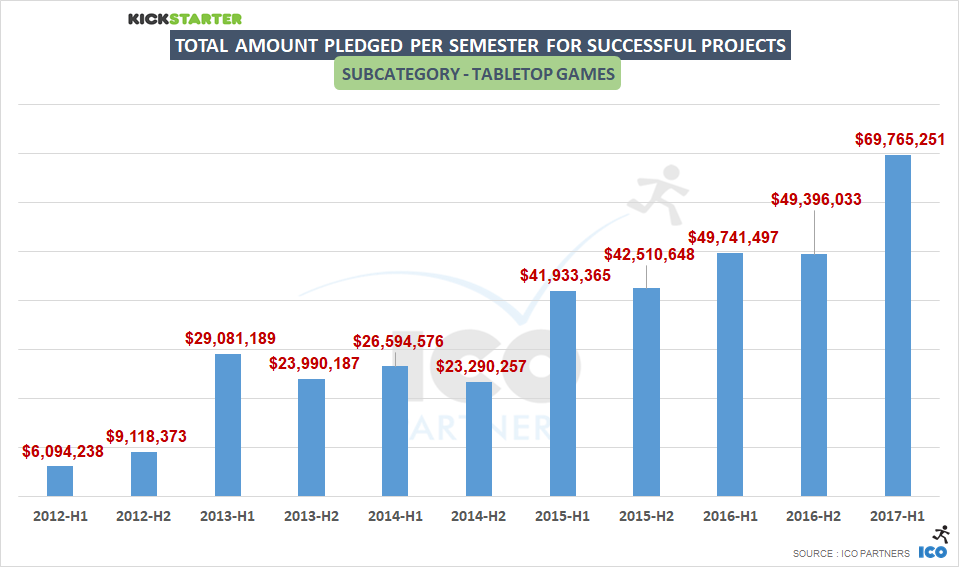 Following the steady growth of funded projects, it is not surprising to see a record breaking half-year, and if current trends continue there is no way that 2017 is not going to be the best year ever for the subcategory too.

Let me share the number that I find the most mind-boggling in the mid-year update:

Of course, the huge success of Kingdom Death Monster 1.5, that raised $12.3m, plays a role in that impressive performance. But the growth is seen across all the strata of funding: 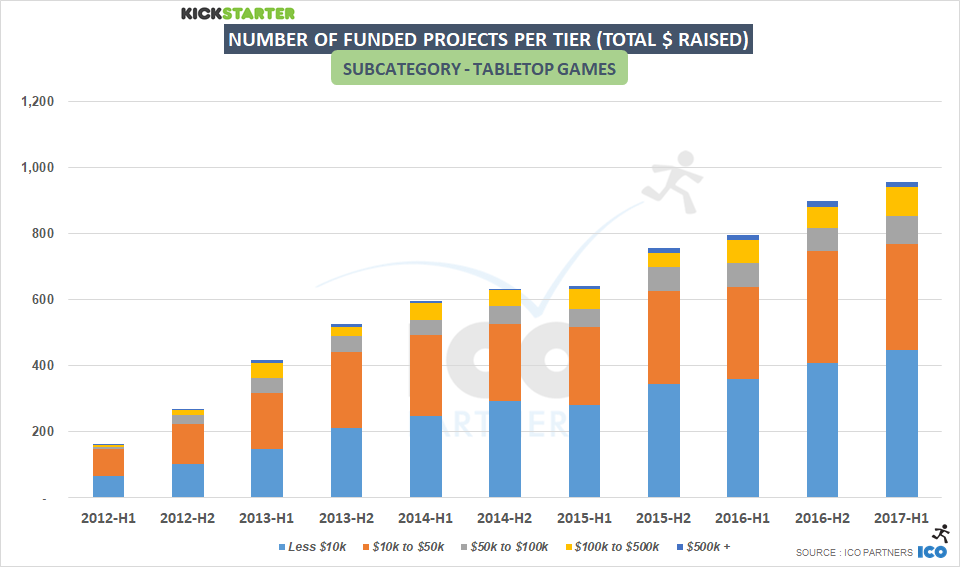 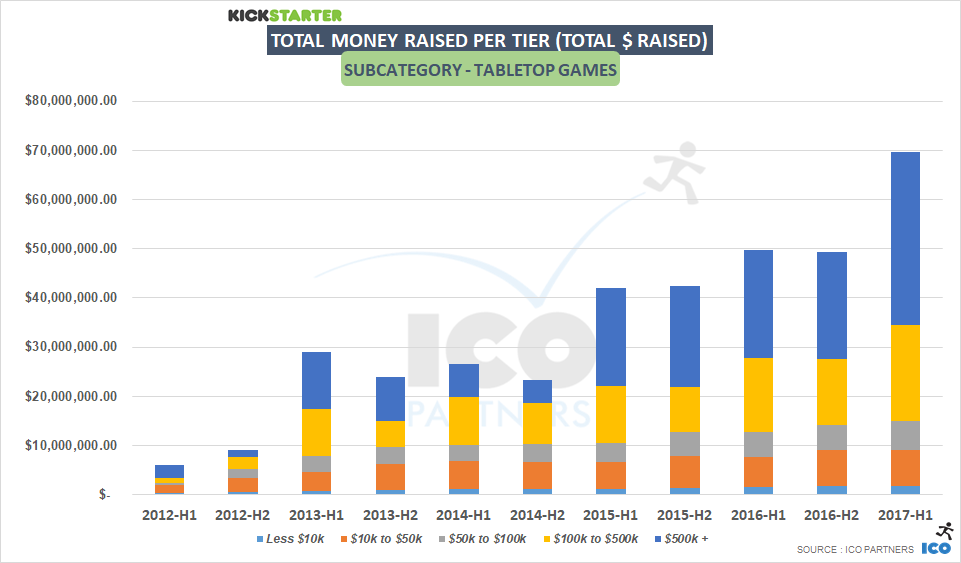 Across all tiers (except the lowest one) this was a record breaking semester in the total amount of money raised.

With board games growing so fast, and the rest of Kickstarter being still quite stable, it is clear there is a shift not visible at a first glance on the platform. There is a slight decline, or at best stability, across all categories, with the exception of one that keeps growing steadily.
By the time Kickstarter has found its new CEO, I can easily imagine games representing a third of the money raised through the platform.

And Games projects might be blurring the line between tabletop games and video games further, like the currently live campaign of Beasts of Balance: