With more and more money being invested in games and gaming peripherals we are seeing, not only gamers become overly-protective, but developers as well. What role does the journalist play and how do you see the gaming culture maturing?
Isaiah Taylor
Blogger
October 30, 2010 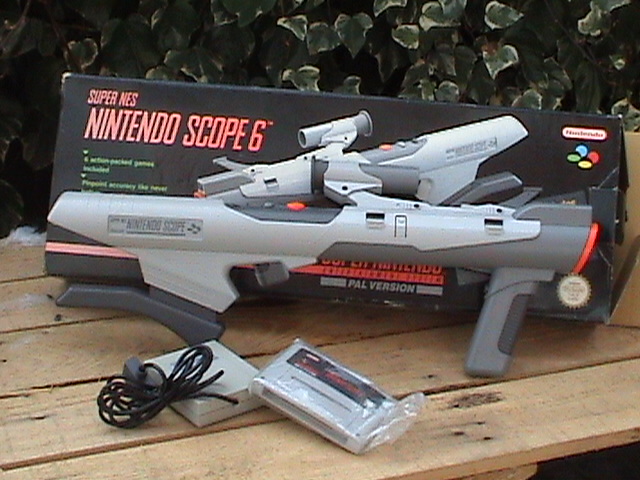 How many of us buy with the hopes of a long future with our toys, only to be stuck holding the Super Scope 6? [Sorry, the Nintendo Scope 6 for our foreign readers]
I have been a long-time advocate of the idea that being a good fan means knowing the flaws of what you love. There is a reason why long running television series are canceled. There is also probably a good reason why your favorite musician doesn’t sound as good as he or she did when you initially ‘discovered’ them in your high-school days. In gaming, there seems to be this growing divide between fans and games journalist.
Oddly enough, this is where little blogs and people like yours truly come in handy. Err, at least I’ll try to be. It hurts when you read a review that didn’t get it right doesn’t it? Its aggravating to see a message board full of sausage fingers speak ill of something you hold so dear. Take a deep breath, and take my hand. Here we will discuss why this separation is growing between developer, journalist and gamer. And is this divide necessary?

We, gamers, tend to take our thousand dollar-a-year [or in my case several tens and twenties] hobby very seriously. Almost to the point of losing focus and logic in the face of an opposing viewpoint. This year is no different from any other. With this burgeoning movement of motion control devices [no pun intended] -- gamers feel the need to pick a side and support the thousand dollar investment they rode in on. Completely natural and in some form logical. The problem that seems to be growing is a sense of unconsciousness to history. 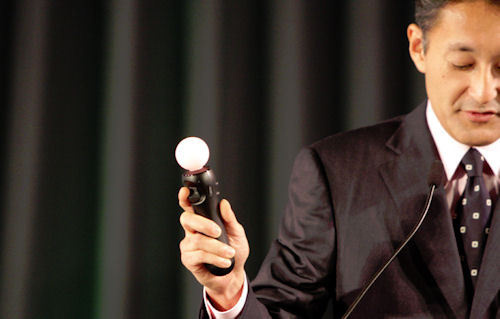 Here we see Kaz Hirai (CEO of SCEI), holding one of the greatest advancements in gaming technology or a glowing paper weight.
I love that games may, by proxy, influence advancements in how we consume media and communicate with others as a whole. I’d dare say, tools like Microsoft’s Kinect and Sony’s Move could be huge in the medical field as far as studying kinesiology and mobility issues of the physically impaired.
This 'picking a side' itch we have to scratch will pale in 10 years [if that] when everyone sees and benefits from the good that comes from it. I say the good because I’m thinking positive, but what happens if all [or a majority] of this is negative for gaming? What happens if the 3D our eyes imbibe in theaters, in games and eventually our home viewing areas, carries a penalty?
Not so much in the vein of long-term health issues [which could very well be a risk], but this now novel option becoming a mandatory drain on developer and consumer resources. I’d like to think I am not alone in this feeling of trepidation. But this point illustrates, that I too feel, my dollar is valuable and no smooth talking company is going to con me. And so the divide grows.

This feeling of insecurity is a two-way street however, recently it made [small] news that developers are just as protective as gamers when it comes to this worldwide culture. The same advice applies, when we learn how to step outside ourselves and acknowledge how much time and money has been invested, it makes the swearing and cursing behind the keyboard look kinda silly.
The fact that we still live in an age where a bad review warrants a journalist to get a phone call, because ‘he wasn’t playing it correctly’ gives me an uneasy feeling. On the flipside of that, its sad to see a review written in a glowing form and given a score that ‘non-readers’ will then analyze [because for some reason we often nominate ourselves to be analyst?] to be something that doesn’t reflect on the written review itself. Example: "Game X is experimental. The story is amazing and the overall game was fun, but the controls could have been better." Score: D+. 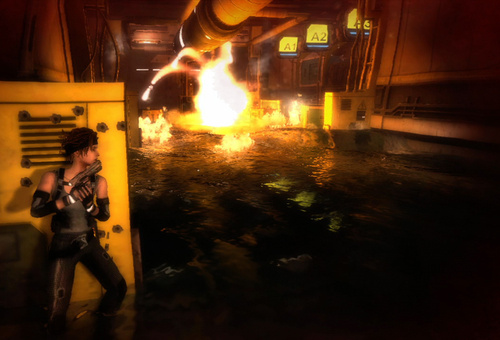 Hydrophobia, a game that could benefit from some minor advertising, instead the seems to be getting noticed based on what certain jounalists' conflicts with the game developers.
While we are tip-toeing around the topic of being responsible and respectful -- Peter C’s article on TheSixthAxis comments on the responsibility of critics and game journalists. He illustrates excellent points of how varying the voice of game journalists can be and why its discouraging to fans who value their opinions. The one vital flaw with Peter’s article is that he boldly states,

“I spent some time with the developers the week before release so that I could see how the studio worked, what they were working on and how they were gearing up for their game’s release.”

Peter visited Dark Energy Digital, pal’d around with the small company and a week later wrote a review for their game Hydrophobia. A review that admitted faults, but was majorly positive. No matter how relevant the topics we discuss in articles like Peter’s, if you are going to call out the gaming press be sure you are practicing what you are preaching. There is no reason for a journalist to be hanging around a development studio for a game they are reviewing. I’m sorry, its just how I feel. In this case there should be a clear divide between developer and journalist.

Maybe this is a common practice? I always hear, via various gaming podcasts, of ‘x amount’ of journalists venturing off to some far off exotic locale in order to sit in a hotel room with a PR rep to fully experience their latest product. A product that you and I fight tooth and nail over on gaming sites and message boards -- trying to prove its worth. Funny, I haven’t received an invite yet.

Tom Chick’s review of Civilization V on 1up.com will serve as the main attraction of this piece you’re reading. Personally, I thought Chick’s review was spot on and [not that I care for scores] his C score further echoed his main idea. The outcry of forum posters on 1up was to be expected, but to see Twitter explode with gossip of Chick’s “link baiting” and “1up’s desperation” seems to have introduced a new wave of instant gratification rabble-rousers. Its all very interesting. I have yet to see a non-fan of Civ V complain about the article, but then again that’s like saying since the bones weren’t in the cave then the messiah must have risen to the heavens.

What was the point of all this? Ah yes, this neo-age of justifying our purchases one left-click at a time. No one wants to be the kid at the table holding the Super Scope 6. No one wants to have invested all this time and money in their [what I assume] overly-cherished hobby only to be told the flaws. Strange. Much like how most of us got into indie or underground music at a certain age, its always a special moment when you meet a group of people who found it the way you did. Maybe through a review or playing over a friends house. In the rare case, you might even make a love connection or a ‘bro for life’ when its all over.

I try and practice what I preach as well. Its difficult and this article functions as a reminder for both you and me. When your favorite game you haven’t played yet comes out and receives negative comments and reviews [depending on what you deem negative], remember that you are an impulsive person who occasionally can’t help themselves when a keyboard is in front of them. Remember my words and know that I love you and that everything will be okay. If that isn’t enough, punch a pillow as hard as you can -- put your most hated developer or journalist on it. Trust me it helps.

[Author’s note: Would have loved to have put the Fallout: New Vegas review controversy in this article, but I couldn’t get enough sources to back up Bethesda’s shady dealing...oh wait. Screw it.]