Smaller indie developers are creating more and more intriguing games, and in this Gamasutra postmortem, we learn about the creation of Wolverine Studios' sim-heavy Total Pro Golf 2 for PC, discussing both the triumphs and pitfalls faced by creator Gary Gorski while creating the community-aided title.
Game Developer
Staff
July 23, 2007

In May of 2006, I formed my own PC game development company, Wolverine Studios. I was 27 years old, and my game development background consisted of three titles, all sports text-simulation games, all developed in my spare time. I released my first game as Wolverine Studios in August of ‘06 –Total Pro Golf. It was a golf simulation—no fancy 3D graphics, but a detailed career mode that focused on role-playing aspects as well as golf.

Less than a year later, after finishing up the second Wolverine Studios title, Draft Day Sports: Pro Basketball, I began to consider my next project. I felt that Total Pro Golf still had untapped potential, so I decided to develop a second version, named Total Pro Golf 2, with a significant list of new features.

1. The first thing that went right with TPG2 is what went wrong with the first game. We released the original in August of 2006, and we had a decent customer response. Reviews were generally positive, but our forums weren’t buzzing in the months after release.

So we asked questions.

We found out that there were two main areas we needed to improve. Some people didn’t like the fact that the game was designed to be a strict simulation of golf –during a round, all they could do was choose a club, the shot type, and an aiming point. So we decided to implement a tri-click system in TPG2 (in addition to the one-click version, which we retained).

That way, people could play the game either as a straight sim or with a stronger arcade element. The second big complaint was that there just wasn’t enough to do during a round of golf. We added more shot selection options, like draws and fades, and focused on giving the player more tactical decisions during a round. 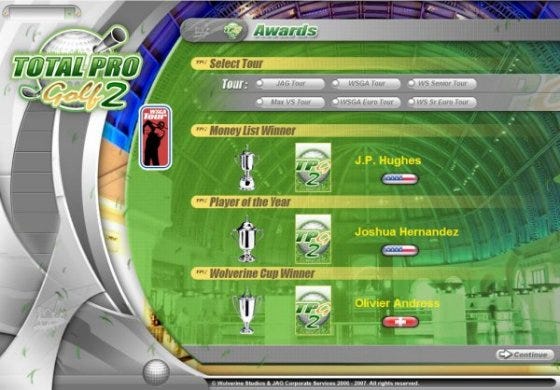 2. The second thing that went right was the addition of features that gave the game a more international flavor. We added three European tours in addition to the three American tours included in the original TPG, and also added the ability to travel between tours in different seasons. We also added a points race for the championship, emulating the changes on the American PGA tour.

We also worked on making the player creation feature easier to use, as well as integrating downloaded (user-created) courses into the game. Adding a feature that automatically incorporates all available courses into the tour schedules was particularly well received.

3. Third on our list of things that went right would be that we got lucky. What would a golf game be without golf courses? Selling the idea of a 2D golf game is hard enough – we would need amazing courses to make it work. The course designer we created had the ability to import images into a grid and simply map where everything was on the image. This was considered an alternate, secondary method of creating courses, but it turned out to be far superior to our original, primary method.

The course designer/mapper is available as a free download and people quickly took to the mapping method – except that they weren’t spending hours and hours meticulously drawing out holes in their favorite graphics program – the community had a better idea. Many golf courses have hole layouts on their website, and many courses can be viewed overhead with satellite images found by using a service like Google’s.

The game plays out in a top down 2D format, so that’s the only kind of picture they needed to recreate courses. Unlike most golf games where a recreation of a course takes 6 months or more of dedicated work, new courses were being mapped and released in days.

The community quickly mapped a number of the world’s greatest courses for use in the game, and a community website was created at www.tpgcommunity.net where these courses are available for download. The rapidly growing, user-created course database became a huge “fun factor”.

Sometimes having things go right involves the selflessness of other people.

For this version of TPG, I approached the best community designer (Jim Swanson) and asked him to develop the courses that would ship with the game. He had two courses in the original game, and for TPG2, he designed six more, and for an incredibly fair price.

4. I mentioned about luck; this is the second factor that you appreciate when you’re a small fish in a huge ocean – generosity. I’ve been blessed to find people like Jim who have been good to us. They know the situation we’re in and they help in some way because they’re nice people. I have a staff of these guys at Wolverine Studios who all contribute to each game in some way, whether it’s monitoring the forums, assisting customers, testing the games, researching data – whatever I need. That’s a huge factor in what went right.

Jim wasn’t the only person outside the company to lend his services to the game. A good friend and fellow indie developer, Shaun Sullivan (creator of Puresim Baseball), was kind enough to lend his talents to the game for the second year. Shaun created the ball flight effects in the original version of the game. This year, he developed the new tri-click system as well as assisted on a few other on-course innovations. When you’re a one-man coding team it’s always great when you get the benefit of a little outside help, especially someone who is as talented as Shaun.

We also had support from the blogging community—in particular, Bill Harris. His feedback is responsible for some of the innovations in the game, including the biggest one of all-- the gallery reaction in a tournament’s final round. Should you find yourself in contention on Sunday, you’ll hear roars and groans from around the course as the leaders scores change. Then you’ll see an updating leaderboard so that you know exactly what happened.

Bill has also written about the game extensively in his blog, including putting together a detailed guide for new players, and called TPG2 the PC Sports Game of the Year last week. To know that we have someone out there taking his own time and using his voice to rally support for our game is a great feeling.

5. Finally, I think the biggest thing that went right is that we found that “one more turn” feel. Many people take a skeptical approach to trying the game. It’s a game that simulates a sport where a dramatic fist-pump by a player is the pinnacle of “action” so we understand the hesitation to try a simulation of that sport. But we focused more than just on making a realistic golf simulation.

The RPG elements of the game combined with the ease of being able to play a round seemed to gel perfectly to create that elusive one more turn feeling and that’s not something you can design; it either happens or it doesn’t. The game is so much deeper than just playing a round of golf and we’ve seen numerous people openly praise the game for sucking them in that we know we got it right on this one.

1. By far, the biggest thing that went wrong with the game was lack of publicity. It’s very difficult for an indie developer to draw attention to their game, and given our tight development schedule, there was even less time to devote to marketing than normal.

2. Not only did we not get any pre-release buzz going, but also there wasn’t much post-release buzz either. The lack of pre-release press information meant that game reviewers weren’t even aware that the game had been released. That situation will come around and the game will get reviewed, but most of those reviews will be a month or more after release of the game or later.

3. Our initial decision on the demo of the game was not well received. We offer a fully playable, three-day demo, but there was no walkthrough, and some people who play a demo want a more guided path than we gave them—they wound up not being sure what to do in the game and never got fully immersed.

We did create a second demo with no time limit (although how far you can progress in the game is limited), but we still missed some potential sales because of the choices we made with the first demo.

4. We also had to leave a feature or two on the cutting room floor as well. They weren’t features we had announced, but we’d still hoped to get them into the game. Hopefully there will be enough interest in the title to continue its development, because the game world still has rich opportunities for expansion.

5. The biggest thing that went wrong is that we’re still an indie development company that nobody knows about. It’s very difficult to get noticed, and awareness only builds very slowly over time. It’s the same grind that every good indie developer is in.

I feel that Total Pro Golf 2 turned out to be the best game we’ve ever released. Interest in the game has picked up since it was released, and feedback has been consistently positive, particularly after the release of a bonus pack that included new features and two additional courses.

There are so many good games out there that never get noticed – it’s the nature of the beast I suppose – but that’s not going to stop me from doing something I love, which is making these games. Budget is important, but it’s not as important as vision.