SEARCH
A minimum of 3 characters are required to be typed in the search bar in order to perform a search.
Announcements
Event
Free Webinar on 5/24: How Predictive Analytics Drives Mobile Conversions & Boosts Revenue - Register Here!
PreviousNext
DISCIPLINES
7 min read
article

I’m leaving Ronimo, here’s why and what’s next

After 14 years at Ronimo, I’m leaving the company I co-founded. I’l keep making games, but starting this months it’s on my own (and in the future maybe I’ll start a new studio). Today I’d like to share why I’m leaving, and what I’ll be doing
Joost van Dongen
Blogger
April 05, 2021

After 14 years at Ronimo, I’m leaving the company I co-founded. I’l keep making games, but starting this months it’s on my own (and in the future maybe I’ll start a new studio). This news makes me both very sad and very enthusiastic. Sad that I won’t be working with my amazing friends at Ronimo anymore; enthusiastic that I will have total creative freedom to make exactly what I want to make. Today I’d like to share why I’m leaving, and what I’ll be doing next.

The reason I’m leaving is that I want the creative freedom to carry out my own ideas. I have tons of concepts for games, music and art, but I can’t execute them at Ronimo. I might have had a leading role at Ronimo as technical director, producer and co-owner, but when it comes to creative choices, Ronimo is a pretty democratic company: everyone has input on creative choices. That’s great for the creative process: tons of ideas bubble up and stuff that a lot of people are enthusiastic about makes it into the games. However, with 7 founders and a dozen employees that means that my actual creative say wasn’t that large. Especially since Ronimo makes only one game every 3 years.

That used to be fine for me since I had a creative outlet in my spare time. I made Proun, Cello Fortress and The Ageless Gate that way over the years. However, three years ago I became a dad and this has reduced my spare time a lot.

I solo developed Proun and Cello Fortress in my spare time, including code, design, music and 3D art.

The trigger for me to decide to leave Ronimo was a conversation with my wife, Marissa Delbressine. I always write down my ideas in my notebook. However, this became pretty depressing when I realised that I didn’t expect to be able to do anything with all those notes. So I said to Marissa: “I might as well not write down my ideas anymore, since it feels so useless if I can’t do anything with them.” This made her very sad, more than I had expected. Marissa is a creative person herself (she’s a comic artist, currently publishing The Shadow Prophet on Webtoon) so she could imagine the pain of telling yourself not to be creative anymore.

Marissa’s response got me thinking: maybe instead of dropping my own ideas, I should quit Ronimo instead. But I also didn’t want to abandon my friends. So in Autumn 2019 I told the other founders of Ronimo that I wanted to leave, but that I wanted to first finish Blightbound with them. They were sad to see me leave and tried to convince me to stay, but they also supported me in wanting to follow my own path. Their response was heart-warming to me. After all these years the co-founders are still my friends, but I will see them a lot less now. I will miss them dearly, as well as the rest of my former colleagues at Ronimo. 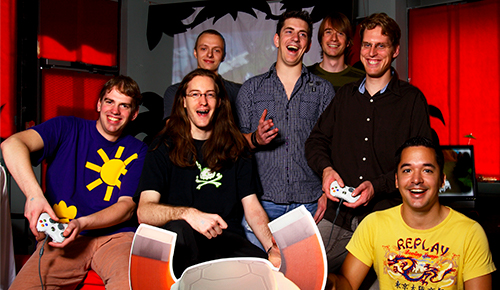 The 7 founders of Ronimo back in 2007, a few months after we founded the company. I'm on the left, lacking both a beard and grey hair back then.

Since people often leave their company because of frustrations or disagreements I would like to stress that that’s not the case here. I just want full creative freedom to explore my ideas, and that’s the only reason for my departure. I still love the folks at Ronimo and I plan to keep hanging out with them regularly (well, once the current pandemic dies down, I guess).

When I first talked about this with the other founders, we still thought I would be able to leave Ronimo in Summer 2020. But Blightbound got delayed and I decided to finish the game with the team. Then the game got delayed some more, and we agreed to set a final date, since I got restless as my departure kept moving. That date is now. As of this month I don’t actively work for Ronimo and I don’t have any management responsibilities anymore. 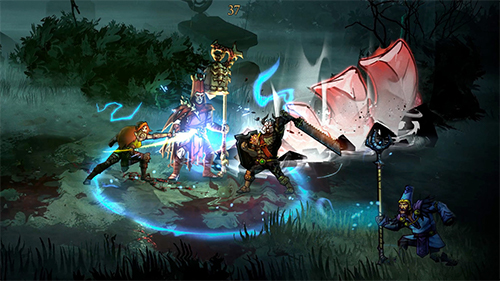 Blightbound, which is currently in Early Access on Steam.

So, what will I be doing next? I mentioned I had tons of ideas, so I won’t be spending any time brainstorming or soul-searching. Instead, I’ve started already. My plan is to spend the next year learning new tech and skills and doing a bunch of smaller projects. After that I want to start making a bigger game that will hopefully be the start of a new studio.

I’ve already taken the first step last week: I’ve finally released my album The Ageless Gate. I’ve been working on this album for years and it’s great to finally get it out there. It’s available on all the streaming services, with links to all of them here. The Ageless Gate is an instrumental concept album with lots of cello and a narrator that tells an overarching story in short fragments at the starts of the songs. It’s quite a unique thing and I hope it will find an audience!


Here's a preview of Sandrider, an intense cello trio and the opening song of The Ageless Gate.

As for the coming year, for now these are the smaller projects I intend to do:

I also intend to learn a lot of new stuff. The main big things will be switching to Unreal Engine and Blender and learning the ins and outs of both. I also plan to expand my knowledge of UI design, design of management games and economies, task-based multithreaded programming and data-oriented code.

Then later on I hope to start working on a bigger 3D management/building game. I have a bunch of concepts for such games lying around and I currently tend towards one of the sci-fi ideas. I hope to build a bigger studio around this, focussing on high-quality 3D management games, similar in production value to games like Frostpunk, Planet Coaster and Two Point Hospital. I hope I’ll be ready to start pitching to investors with that in a few years.

It will undoubtedly take quite a while before all of these plans start making me a decent income. However, I’ve always been rather frugal, so I’ve collected enough savings that I can survive on those for long enough.

One thing you can see here is that I plan to do a LOT. Way too much, probably. I think this is going to be my biggest challenge from now on: keeping the scope of my projects small and limiting my expectations of how much I can do in a week. For years I’ve bottled up so many ideas and plans that I want too much too fast now. I’ve noticed that I’m already experiencing some stress because of how much I want to do, so keeping my plans realistic and doable in a chill manner is going to be my biggest challenge.

A clear split between work and leisure is going to be paramount to that, since up until now my hobby projects were my leisure. Now that they’ve become my work, I should make sure to not become a gamedev monomaniac. I’m sure my wife and son will help keep me grounded though, so I expect this will turn out fine.

I would like to conclude by thanking all my friends at Ronimo for 14 years of great fun. Thanks for everything I’ve learned from you and thanks for sharing all the lows and highs of making games together. I’m sure I will miss the banter and the laughter at the office most!

On my last day at Ronimo, the art team chose me as the theme for their biweekly sketching session. I love the resulting portraits! Art by, from top to bottom: Gijs Witkamp, Koen Gabriels, Ella Kremer and Gijs Hermans.