How to ruin your Game and the entire Gaming Industry

Giving people what they want is ruining the gaming industry, and yet surely YOUR game that looks like all the others will be different!
Johnathon Swift
Blogger
December 02, 2012

Unfortunately Insomniac games asked people what they wanted instead of showing it to them, and the result is a game named FUSE. It's not going to sell well.

Here's a peice of advice that's similar to the one Jobs gave, and applies more specifically to video games. Don't ask the average person in your target audience if they like what they're seeing of your game, because the only thing they know they like is exactly what they've seen before.

And doing that is among the biggest mistakes you can make, because the only thing this will result in is your game being totally undifferentiated from what came before. The average person isn't a game designer. They don't know how to think about these things, they might still believe game design is a fairy land of playing video games all day. Asking them to design your game is the equivelant of a director asking random action movie fans how to make the next James Bond, it's ludicrous on the very face of it.

You, if this applies to you, are the professional. Its your job to make the game, not the person that's going to buy it. You are responsible for it, and there's something that can happen when you start listening to advice from people who only play games.

Let's take the example of Fuse/Overstrike:

Here is the original character concepts and art style of the game Overstrike:

And here, is the new, audience approves style:

One of the problem here is that many game developers listen to their audience, but don't trust their audience beyond 5 minutes. "If you can't grab your audiences attention in 5 minutes then your game is a failure." Sound familiar? Yet it is a very strang thing to think. Like believing that if people didn't like a movie based on 5 random minutes and then the movie is a failure. Frankly I'd reckon most every movie would failure based on that criteria.

And this isn't too mention that audiences just paid $60 (hopefully) for your game. I doubt most would be willing to toss it out after 5 minutes. Perhaps giving audiences the benefit of the doubt for being a bit more willing and intelligent would be very helpful to reception and sales alike. Perhaps believing that they might, just might, be willing to enjoy a game even somewhat different from before would be a big help.

More to the point, going for the above and refusing resolutely to stand out from the crowd whatsoever as a goal is not an ideal I think anyone shares; yet it's the outcome of this well intentioned process of "giving the audience what they want". We've so many action games today that it has simply become nigh improbable to raise your games head above the crowd, and yet inevitably Nathan Drake is somehow the hero of every game. From Mass Effect to Uncharted, from Bioshock Infinite: 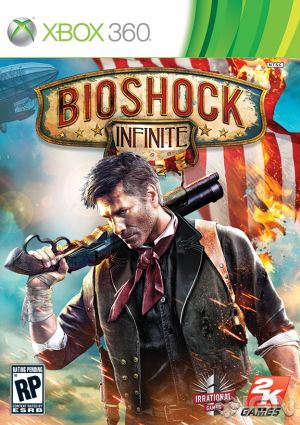 To Assassin's Creed. The industry has managed to make much the same games every year for years on end. To the point where, amazingly, they've individually managed to have the exact same man with slightly different hair star in every single one of them as the protagonist.

And yet there is fret and wonder as to why, oh why, video game sales have been declining for 4 solid years. The very thought that the exact same hanful of games have been sold to people every year for 4+ solid years is rarely spoken by the very developers making these games.

And the reason for this? One of the big, outstanding reasons is asking people what they want, and what they want is what they already know. This causes the classic business problem of the market becoming undifferentiated. And when that happens, only the best of the undifferentiated win. The losers are the games like FUSE, and more will follow.

And worse, if you can't differentiate the same game you sell people every year from the last one you sold them, event those will stop selling. Call of Duty certainly illustrates this point well enough. If Call of Duty is declining, how well do you really expect your Nathan Drake action game to fare?