How To Create A Localization Strategy For A Mobile Game

Market insights and pointers to help you create a localization strategy for a mobile game.
Damien Yoccoz
Blogger
May 21, 2020 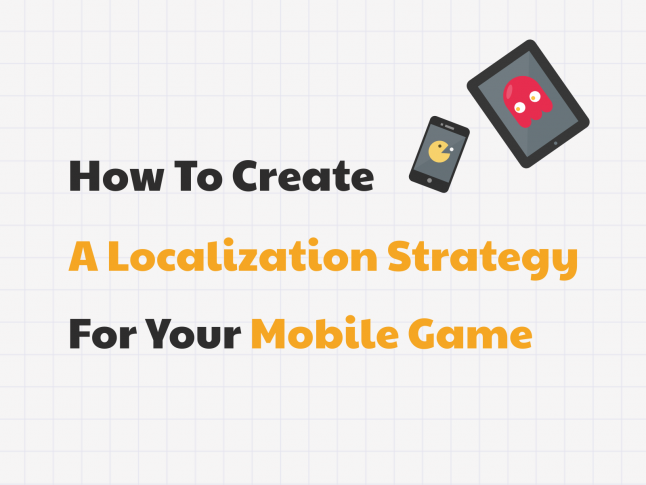 Did you know that in 2019, the global market for the mobile industry brought in $68.5 billion?

And this figure will just keep growing. To put this into perspective, this figure was at $44.8 billion in 2016, with 82% of that coming from games.

This means the global market is filled with possibilities for your mobile game! But, as an indie dev, you probably can’t afford to localize for the entire globe. Instead, you have to pick and choose which languages and regions to localize your mobile game to.

Before you decide, you should consider all of the factors we’ll discuss below.

4 - How popular is your genre across the globe?

So which countries have the most smartphone users?

China wins by a long shot, with 851.2 million users and smartphone penetration of 59.9%. This means more than half of the population can potentially play your mobile game.

In fact, we dedicated an entire post to the Chinese gaming market, so if you think this is for you, make sure you read up!

So where does the U.S. stand in this list? They actually rank third in the list. While the U.S. has a higher smartphone penetration rate than China (79.1%), this still racks up 329.1 million users, even though their population is significantly lower.

2 - iOS vs. Android - which platform will your game support?

If you plan on launching your game on both platforms right away—great! Feel free to skip this section.

But in the indie world, you often have to choose one or the other, even if that means porting to the second platform at a later stage.

Before you decide to localize for a given language and region, make sure the countries that speak that language have a high OS penetration rate for your OS of choice.

Here’s what you should know.

In many regions (North America, Middle East & Africa, Asia-Pacific), Apple has the highest market share. In Latin America and Europe, on the other hand, Samsung wins the game.

But knowing which OS has the highest percentage of shares isn’t all you need to keep in mind.

Remember that Apple is the only iOS brand of smartphones. So if your game works on most device brands (and not just the latest Samsung phone), and all of those brands together surpass Apple’s market share, you may want to consider choosing Android instead.

Here’s an example. In North America, 59.4% of smartphone owners use Apple. In this case, it’s a no-brainer—go for Apple as more than half of the users are on iOS!

On the other hand, in Asia-Pacific, where you’ll find countries like China, Japan, Korea, and Australia, Apple still has the highest market share at 36.6%, but the rest of the market is taken up by lesser-known Android hardware. This means 63.4% of smartphone users use Android.

What else do you need to think about?

You also need to know that OS isn’t everything. Not all countries have access to the latest hardware. Will your game require a strong CPU to run? Is it only playable on tablets, or can it be played on smartphones too?

As mentioned above, regions like Asia-Pacific have lower penetration for high-end phones like Apple and Samsung. Huawei, Xiaomi, and OPPO have 27.3% of the market share combined, while Samsung on its own only has 11.3%.

Let’s look at the Philippines as an example.

And guess what—although OPPO dropped to 27% in the last quarter, Vivo beat out Samsung! Now Vivo holds 25% of the market share while Samsung has dropped to 9%.

So what’s the point here? If you’re launching a high-end game, maybe it won’t be worth your while to localize in places like the Philippines, where most users don’t have the latest Apple or Samsung phones.

Some countries, such as China, prefer to use the Freemium model when playing mobile games.

If your game has an upfront payment model, and you’re not ready to localize your payment model based on this cultural difference, then don’t bother spending your resources localizing for a Chinese audience. This audience just doesn’t convert well with paid games.

4 - How popular is your genre across the globe?

Chances are your game’s genre will pique the interest of at least a few players in any country. But are there enough potential players to make localization worth your while?

For example, Brazilian players—whom we already established love mobile games and convert well for in-app purchases—love strategy and adventure games the most.

Now let’s look at other top-performing genres across the globe:

5 - Consider your potential return on investment

Here’s the truth with localization: not all languages require the same level of investment!

If you are translating to Russian, Brazilian Portuguese, FIGS, Dutch, or Chinese, the cost will be average and worth your while if you think you have enough potential players who might be interested in your game.

So, as we’ve seen above, if you have a strategy game with in-app purchases, localizing for the Brazilian Portuguese market is a no-brainer for your indie game.

On the other hand, localizing for the Japanese and Korean market will typically cost you 30% more, and Nordic languages like Swedish or Danish will cost you about 50% more. It may still be worth making the investment, but you need to be sure that you have a sufficiently large potential player base to get a return.

No matter which languages you decide to localize your mobile game into, remember this: for non-English players, or players with poor English skills, low-quality localizations will outright ruin the entire gaming experience. This is especially true if their culture isn’t taken into account.

Got a mobile game localization project in the pipeline? Get in touch to work with us to make sure you get a high-quality localization that respects your players’ culture.