How to better represent older characters in your game

A large demographic segment of the game industry is currently over 50, but 50+ year old characters in games are typically underrepresented and limited to 4 common tropes. This post discusses these tropes, their implications and how to move past them
Bob De Schutter
Blogger
September 21, 2020 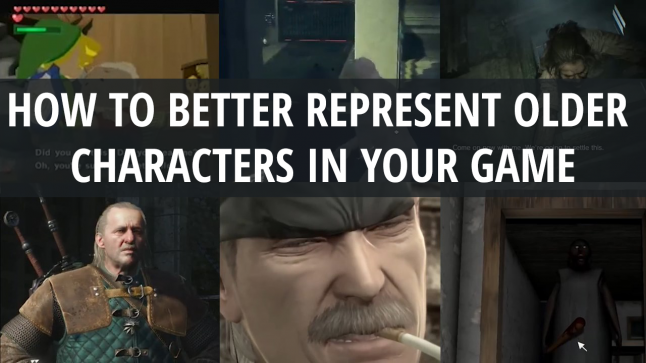 Gender and race are perhaps the most commonly discussed topics when it comes to diversity in the character representation of games. After all, both gender and race have often been represented poorly and there is a large body of work providing examples and analyses on either topic. To cite one example, a 2009 large-scale analysis by Dmitri Williams, Nicole Martins, Mia Consalvo and James Ivory found a “systematic underrepresentation of females, Hispanics, Native Americans, children and the elderly,” and when these groups are being represented in the game, they are more likely to be represented in a secondary role.

While this paper might be over 10 years old at the time of writing this piece, it still is very much relevant today, as shown in a recent analysis of the female representation at E3, and it should be noted that it does not include the representation of immigrants, queer people, trans people, non-binary people or people with disabilities.

As media theories such as Social Identity Theory suggest that our self-concept is dependent on how we see our social group represented in relation to other social groups, this kind of systemic underrepresentation is problematic, especially considering how research has shown how popular games have become among these underrepresented groups. For example, in the annual ESA report on the state of the game industry, it is reported that 88 million US players identify as female and a PEW research report found that 83% of African-American teens and 69% of Hispanic teens played video games in the US in 2015 (in contrast to 71% of Caucasian teens). As representation matters a great deal, it would serve game developers well to represent its audience and their culture to the best of its capabilities.

Older Players and their Representation in Games

The statistics above provide confirmation that the demographics of the game industry have extended beyond just white males, but this expansion has also slowly moved past players aged somewhere between childhood and middle age. In a 2017 report, NewZoo stated that about 15% of all players worldwide are over the age of 50 (and more than half of the people in this group identify as female). Considering that this is a substantial audience that is estimated at 51 million US players in 2019, alongside the literature on character representation above, is it perhaps time to address the question of how older adults are being represented in games as well?

In the aforementioned study by Williams et al., it was already noted that older adults are among underrepresented groups that are typically depicted as secondary characters, and there is no reason to assume anything has changed. Barring magical characters that are aged only in years but not in physical appearance (such as the cast of The Witcher games), video games typically do not feature primary characters that are over 50 years of age. Furthermore, if they do, they are typically featured as stereotypical archetypes – or character tropes – rather than as well-rounded characters.

This is a common occurrence for secondary characters that has also been true for characters of other underrepresented groups. Female characters are often portrayed as damsels in distress, femme fatales or girls next door, while Black characters are often the violent thug, the funny sidekick or the subservient help. While tropes are not inherently an issue – they are rhetorical devices writers use to develop an argument, as some genres just do not lend themselves well to fully-developed characters – the overrepresentation of a social group as a trope and underrepresentation as well-rounded characters is problematic for the reasons mentioned earlier.

Even more so, a study by Romina Carrasco Zuffi, in which 65-plus-year-olds were asked to design their in-game characters, found that older adults prefer games that either project aspects of their lost former selves or embrace their present older selves. For an older female player of color, it could be difficult to find either, with the exception of games that offer a thorough avatar creation feature as well as a narrative that follows through on the choices that the player made when creating their character. After all, it does not suffice for a game to allow a player to develop an identity if its game world does not recognize it as such.

As many games do not intend to offer such functionality, it is therefore important to understand the tropes that are prevalent for older characters so that we can offer more diversity in games. While the literature on this topic is limited – only a study on granny tropes in casual games by Sara Mosberg Iversen comes to mind – a tentative analysis resulted in four tropes. Please note that they are non-exhaustive and a rigorous content analysis would be needed to further define them. Furthermore, it should be noted that these tropes focus on mainstream games as they have the largest reach, even if there are different representations of older adults in indie titles.

Wise Granny is a 50-plus-year-old NPC that writers use to explain parts of the backstory, as their advanced age has made them wise beyond the player’s years. Sometimes, they are used as an extended tutorial as they are not only explaining the backstory of the game, but they are also teaching the player a new skill or acting as a gatekeeper to different areas of the game world. However, as tropes go, they typically do not have anything else to offer the player and their actual contribution to overcoming the challenges of the game is limited. A recent well-known example of this trope would be King Rhoam in The Legend of Zelda: Breath of the Wild (see below) or even Vesemir in The Witcher III: The Wild Hunt.

Wise grandpa King Rhoam explains your backstory, unlocks your paraglider, explains how your Sheikah Slate map works and sets you on your way.

In Legend Of Zelda: The Wind Waker, Link’s grandmother is ill and sends link on a quest to heal her, after which Link receives her special Elixir Soup.

Action Granny is the only trope on this list that is actually playable. This granny trope features a 50-plus-year-old character with the physical abilities of an action hero. As the juxtaposition of the elderly body and the behavior of an action hero automatically leads to comedic, unexpected situations, it is a cheap way for game designers to create laughs. Unfortunately, while the trope does offer older adults to play as an older primary character, it often runs the risk to be too over-the-top for them to actually relate to it. Good examples of it would be Old Snake from the Metal Gear Solid series or Helen from Watchdogs Legion.

In Watchdogs Legion, players can recruit older adults as spies, capable of taking out security guards with tasers or to climb drainpipes on route to their goal.

The final trope revolves around the fear of aging and the aged body. The gruesome granny stereotype is most common in horror games and it depicts older adults – often at a very advanced age – as the antagonist of the game. They provide jump scares or a generally creepy atmosphere, oftentimes with grotesque, even deformed depictions of their body. Examples of this trope would be Granny (the indie horror game) or Jack and Marguerite Baker in Resident Evil 7.

In the boss fight with 53 year old Marguerite Baker and her mutated, deformed body, players will have endure jump scare after jump scare.

To avoid the overrepresentation of these tropes in the depiction of aging and older characters in mainstream game design, the same recipe that applies to gender and racial representation applies here as well: designers that belong to a certain social group are better equipped to represent this group in their work. However, similar to how female, non-binary and BIPOC developers are underrepresented in the game industry, only 9% of game developers were over 50 years old, according to a 2019 survey by the IGDA. As more older adults are now playing games, it would serve the industry well to include them in their development teams.

While no information detailing the role of Tony Hawk and his fellow skateboarding legends in the development of the Tony Hawk Pro Skater 1+2 remake was found at the time of writing, it is certainly refreshing to see a game that features three 50-plus-year-old skaters (in Rodney Mullen, Steve Caballero and Hawk himself) in its cast. Even if the tricks that a player can perform with them are close to the action grandpa trope, it is noticeable that the older cast did not have their appearance swapped for 30-something-year-old versions of themselves – which the developers would have had no problem justifying given that the game is a remake of a 20-year-old game.

Furthermore, the game does not use the portrayal for comedic effect, and the sometimes physically impossible combos are just as outlandish to perform for any of the young cast members as they are for the legendary 50-year-old skateboarder that can still pull off a McTwist in real life. The game presents its older cast through their authentic and non-stereotypical lifestyle.

In any case, the inclusion of older adults, not only in the game itself but also in the game development team, offers unique opportunities. In particular, “gaminiscing” – a game design method that uses qualitative research methods and game development technology to recreate authentic history in the voice of the person who lived through them – is specifically designed to co-design games that portray older characters and their culture in an as natural a way as possible. Hopefully, by being mindful of such methods and the tropes that are currently prevalent in games, the industry can diversify its offerings towards its aged players further so that we can all be happy gamers in our retirement.