Gamasutra speaks with the devs of The Universim about making living worlds and beings that react to player decisions rather than directly obey them, as well as Steam Early Access challenges.
Kris Graft
Publisher
October 03, 2018

Crytivo's The Universim, which was in development for over four years before launching in Steam Early Access in late August, grants players the deity-like powers that come with the 'god game' genre, granting them control of entire planets.

The title, which uses a neat-looking spherical view for the worlds you help to control, feels influenced by classic Lionhead 'god game' titles like Black & White. Universim's nearly 1,000 Steam reviews, averaging out to 'Mostly Positive', speak to the interest in the title from the community.

Still, with ecosystems that can be upset to disastrous effects, a hostile nature that responds to how you abuse the world, and a species of creatures that really only takes suggestions rather than order, players may find their worlds reacting to their godly decrees with some hostility.

Gamasutra spoke with Alex Koshelkov of Crytivo, developers of The Universim, to talk about making living worlds and beings that react to player decisions rather than directly obey them, and the challenges that have come for the game as it moves through Early Access towards full release.

"It comes down to making players feel like they’re playing with an ant farm. While you can certainly poke and prod and influence it as much as you want, the ants are still making their own decisions."

The initial launch was a bit bumpy, largely due to a few technical issues with Steam. There were purchase issues, weird problems with the incorrect build being downloaded, and a few more troubles that popped up here and there. Our inbox, Discord server, and social channels all exploded with messages and memes from our fans. It was great to see how much passion the community had and how eager everyone was to start playing.

Fortunately, the Steam Team (I hope they adopt this as the official name soon) responded to the issues quite swiftly and helped us sort the whole thing out. We hit the top of the Top Sellers list within a few hours, which was absolutely incredible. We’re still gleaming, nearly a month later.

Overall, the reception has been great. The community has been so fantastic and supportive. Of course, there were some negative responses and criticisms, but we’ll be working hard to fix the bugs/issues and address any concerns raised by our fans (the major one being content). 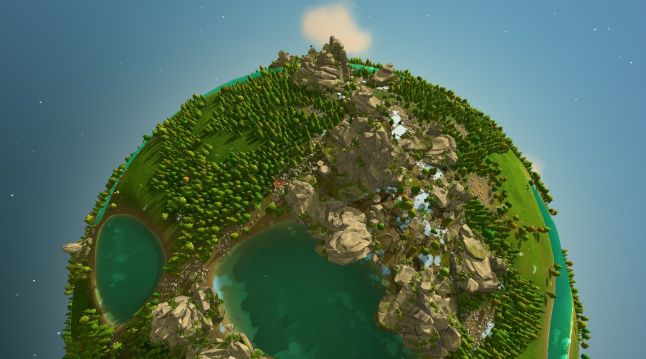 Fleshing out the rest of the game is our number-one priority now that the initial groundwork is complete, so we’re super excited to be bringing some great new content in future patches.

It’s the final countdown to the full release of our game, and we think the community is going to be very pleased with what’s coming.

It’s always difficult to release something early, mostly due to the bugs and missing content. It’s like showing someone an unfinished painting that you’ve been pouring your heart into. You know how great it’s going to be, and even though it shows potential in its current form, the best you can do is hope that person can see through the jagged bits and appreciate what’s already been done.

Regardless, you take all of the feedback (which is the most important part about showcasing a work-in-progress) and improve upon everything until you’ve got something incredible.

We have returned to our monthly update schedule, which ensures a constant stream of bug fixes and new content as we work towards the official launch. This adds a whole new challenge to development, as this content needs to go through QA (quality assurance and testing), go back to the engineers to fix bugs/improve performance, and eventually be cleared for release with the next patch. 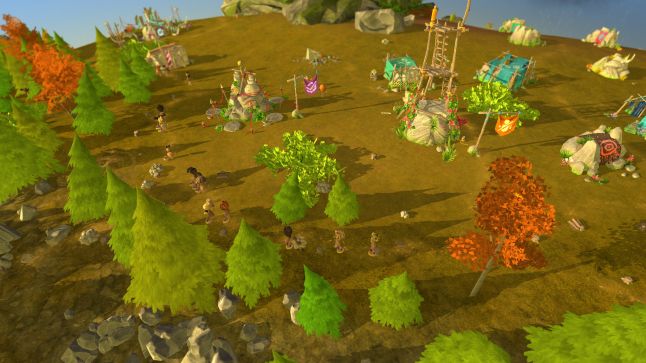 Even then, bugs may slip through that will need to be fixed for the next patch or in a hotfix (depending on size/severity of the issues). Our community has been enormously helpful with reporting bugs and offering feedback, which we’re super grateful for.

As a small team, this process can be quite taxing on time and resources. We don’t cut corners, but that unfortunately sometimes delays content. New features add a lot of fun and show off how much progress we’re making, but they can also potentially introduce some awful new bugs. It’s a lot of work, but our goal is always to keep our community happy. We will continue doing everything we can to maintain that.

Meaningful actions on a living world

It all began with this idea to create a world that wasn’t just a backdrop for gameplay or some sort of asset gallery - the goal was to create an organic, living world. We wanted every tree, creature, and biome to be connected in a fragile ecosystem where the player’s actions have a meaningful and lasting effect on the environment. As a result, making a god game was the perfect way to achieve this vision.

Our love for the god game genre extends back to some of the greats like Populous and Black & White. However, we didn’t want to simply reboot the genre, we intended to evolve it. We replaced islands with planets, added in era progression (Stone to Space), gave the citizens (called Nuggets) far more personality and autonomous characteristics, and so much more. 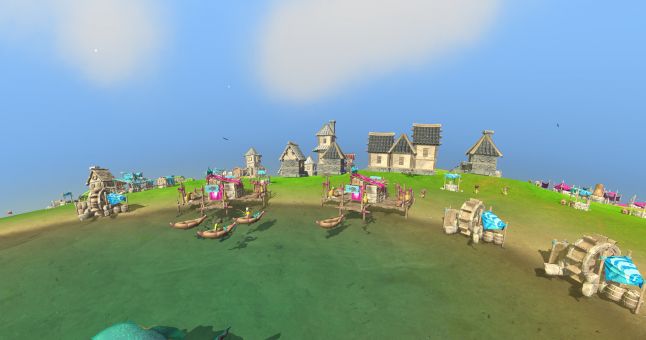 We bundled all of these systems together to create the most engaging experience possible, like the dynamic world (procedural planets, dynamic events, seasonal changes, weather patterns, climate change, and so on), Creator Powers (influencing the world in goofy, destructive, or restorative ways), and city management. We’ve spent an enormous amount of time getting everything working, but we’re glad we did. It has paid off in big ways, and it’ll keep getting better.

A god making suggestions rather than giving commands

Classics like the aforementioned Populous and Black & White set the bar pretty high for us. From the beginning, our fans made it clear that they will not accept anything that doesn’t live up to their expectations.

As you would expect, nailing the feeling of being a god is probably the crux of the entire genre. It’s all about capturing that atmosphere of power and responsibility. Players need to be able to sit atop their clouds and belch excellence down upon their followers, alongside the occasional disaster “just to see what happens”. It’s a bit of a sandbox, but there’s still an ultimate goal to achieve (don’t blow up your civilization/planet).

The Universim absolutely offers this experience, but we wanted to try something a little different. Where other god games may offer a relatively static world with rather unremarkable citizens, we wanted to create a world where life goes on with or without your influence.

Nuggets have their own personalities and unique characteristics, making them more unpredictable and realistic. You don’t necessarily command a Nugget to perform a task, you implant the idea and see what they do with it. You get this sense that while you may be an all-powerful god, the universe doesn’t just wait around for you to do something. 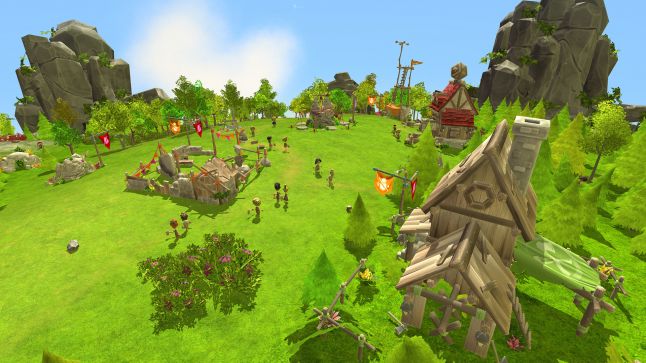 However, to ensure that there’s actually a game here, we have done our best to strike a balance between micromanagement and autonomous operation. In particular, the early ages will require the most player influence, whether this be in deciding on research items (which includes crucial decisions like green vs fossil fuel energy production), placing buildings, and so on. Eventually, as the civilization advances and expands, it will become more self-sufficient and require far less micromanagement. Of course, players can still be as influential as they want, but their attention will likely shift to more macro-level tasks.

On choosing to be a vicious or benevolent god

It comes down to making players feel like they’re playing with an ant farm. While you can certainly poke and prod and influence it as much as you want, the ants are still making their own decisions. It’s a living world simulation, and players can either use their abilities to help it flourish or throw a wrench into the gears and watch the world burn.

It all depends on what kind of god players want to be. Player choice is crucial to the experience, and the dynamic nature of the world makes the entire thing so interesting. You can see exactly what kind of effect your decisions have on the planet and how your civilization behaves.

How The Universim builds upon the God game genre

We wanted players to care more deeply about their fledgling civilization. Seeing Nuggets form families, interact meaningfully with the environment, and perform their periodic bit of shenanigans really adds a special something to the game.

The dynamic nature of the game makes for plenty of surprises and replayability, but not at the expense of a focused overarching narrative/goal. Players will always know what they are working towards, and the experience remains entertaining throughout.

We believe the sheer scale and complexity of the game builds upon the genre. It incorporates so many ideas, both old and new, to create an endearing and fulfilling experience. There’s so much depth to all of it, which makes it difficult to summarize. Going back, the stuff we discussed about being a god but also having the universe tick away with or without you is quite a big part of it all.

Giving players control of entire planets instead of a flat plane was also something new and exciting. However, it proved to be quite a challenge. Moving to a spherical world required us to rewrite physics systems, AI pathfinding, and so much more. It was all worth it, though.

We now have procedural, spherical worlds with weather systems, dynamic events/disasters, biomes, ecosystems, seasons, AI & pathfinding, and so on. All of these tools make the future of the project very promising, especially when you start thinking about what we can do with procedural alien planets.