Getting excellent voice acting into your indie game - part 2

How to convince talented voice actors to audition for your game? In Part 2, I show you exactly how to run a casting call either through email or my new favorite - Discord!
Erik Hermansen
Blogger
July 02, 2021

In part 1, I tried to help you answer the question, “should I have voice acting in my game?” And for indies that haven’t done it before, that question can be hard to answer. 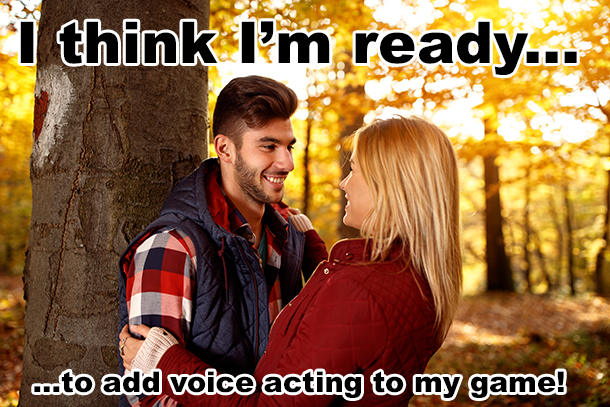 If you’re still uncertain, I recommend reading my Part 1 article. I explain how to make a quick estimate of the time and money for adding voice acting to your game. There’s even a spreadsheet calculator included that will give you hard numbers to work with.

Are you ready for part two?

In this article, I’ll explain what a casting call is and how to announce one in a way that brings you a solid response. I’ll also talk about a new venue for finding and working with actors that I think is amazing – Discord.

That’s right… it turns out that Discord might be an indie’s single best place to go for voice acting. I am excited to explain that, but first…

Casting Calls… How Do They Even Work? 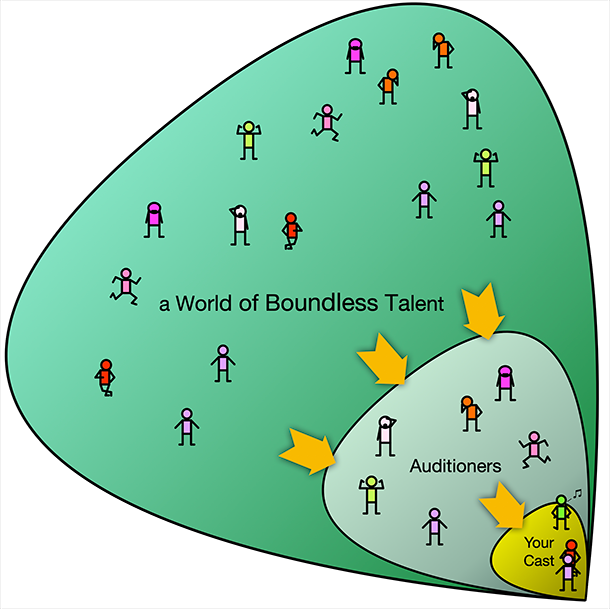 A casting call is a request for actors to audition.

This article will cover preparing for and announcing your casting call. And future articles in this series will cover all the subsequent activities leading up to actors’ performances going into your game as voiceovers.

By the way, it really is a world of boundless talent out there. Remember, you are hunting for magic!

There are lots of little tasks leading up to the casting call. Let’s give that work some structure…

I’ll go over each step in detail.

Step One: Finish Your Script

You’ll want all of your dialogue written so that you can plan your casting call correctly. If you don’t, then you’re introducing risk of casting poorly and maybe pissing off some folks. It might seem like you can start with a rough idea of your characters and then flesh out the exact dialogue later. But I advise against that for the following reasons:

So yeah… finish the script before doing anything else related to casting. 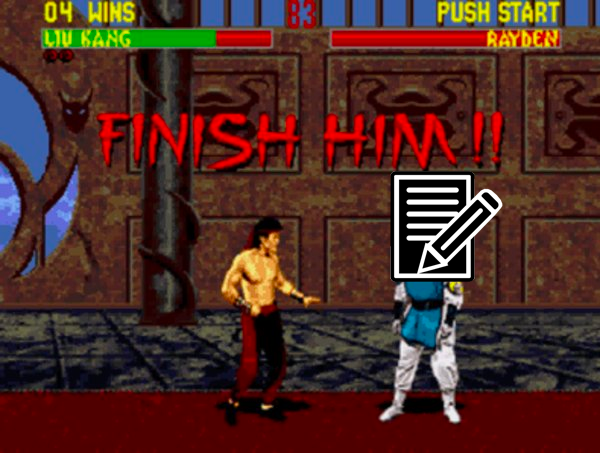 If individual parts have more than a hundred words of dialogue, I recommend getting them into a screenplay format. It looks like this:

To do this, you can use screenwriting software like Final Draft, WriterDuet, or Celtx. This will let you format scripts in a conventional way that actors are very comfortable reading. When you later send lines for recording to your cast actors, you will ideally send those lines in screenplay format.

This may sound trivial to you. “Of course, I’m going to pay people!” you say.

No, you don’t understand.

I just got done successfully casting and recording with forty actors. Not one of them flaked. They all had their recordings to me in less than ten days. The closest thing I did to nagging was asking a few people, “when is a comfortable time for you to send me your recordings?”

That is like rolling “six” on dice forty times in a row! To some extent, I just got lucky that the cast actors happened to be such a good group of people.

But I did some things that helped. I pushed to get everything to actors quickly, including payment. I paid upfront, typically within two days after announcing casting decisions.

You don’t want anything slowing the process of working with actors. So that means being ready to pay.With your script finished, you’ll have a word count and number of parts to cast. You can use those to estimate the money you’ll need to pay actors. (See part 1 for an estimation formula you can use.)

How will you pay actors? In 2021, I think most any actor will take PayPal, and it is currently the most universal way. You can offer multiple payment options, (e.g. CashApp, Venmo) if that works for you. I like sticking with one to keep things simple.

If you do use PayPal, I would recommend linking more than one payment method to your account. Here is a list of actual problems I handled during The Godkiller casting in paying forty people:

If you have 2 or 3 payment methods available inside of PayPal, when one fails in a random way, you just switch to another one. Linked bank accounts seem to be cheapest and most reliable option, but it takes 2-5 days to link them, so make sure you give yourself lead time.

I personally would pay upfront for any service request to an audition-cast actor less than $300. Paying upfront says, “I care less about the money and more about the good work you will do for me next.” You don’t get mired in conversations around trust and payment terms.

I’m purposefully omitting any accounting advice, but consider your obligations to various governmental entities when you pay people. It’s the same stuff you have to figure out for paying anybody that contributes to your game.

So in summary, know how much you will need to pay, be ready to pay it quickly, and have backup payment methods. 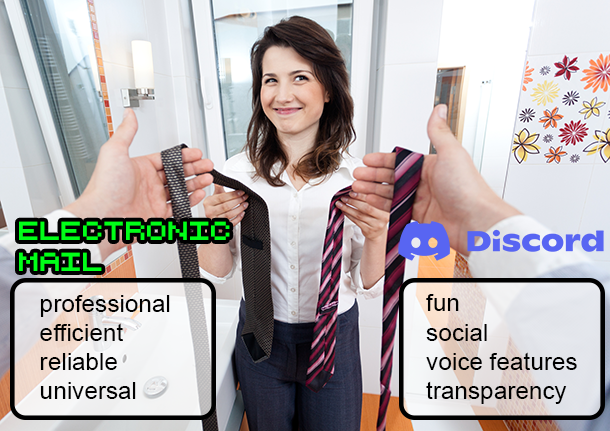 The standard way for actors to send you their auditions is via email. With this approach, you’ll post casting call announcements in different places, e.g. Twitter, Discord. There would be a link in your posts to a casting doc or web-based equivalent. That doc would give actors instructions to email auditions to you. Email is the “no nonsense” approach. If you want to run your casting call tight and efficient, go with that. It also gives you an ability to work with a larger pool of actors beyond those that are comfortable with Discord. If you only have a handful of parts to cast, I’d probably use email for receiving audition communication. It’s harder to enjoy the social benefits of handling auditions via Discord with a smaller number of parts and actors.

But you could be extra-nifty and use a Discord server as a place for actors to post their auditions. Auditions would be posted publicly as audio files on the server, available for anyone’s listening. This creates an event on your server which can be entertaining and educational. Not all actors like public auditions, but most do. And other people on your server (e.g. development team, beta testers) may be interested in watching the auditions as well. 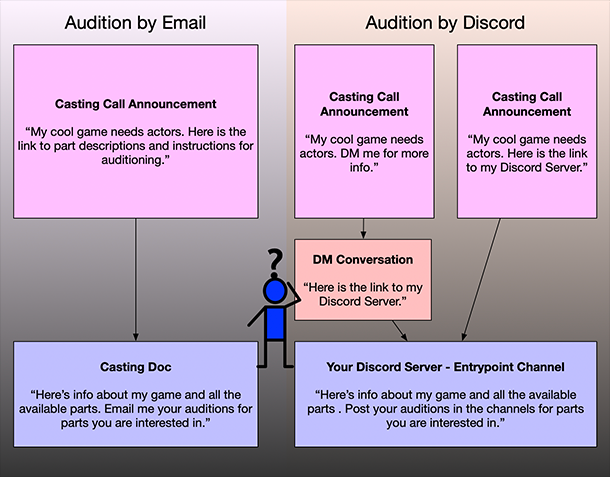 Discord has voice features built into it, so it gives you some advantages in setting things up like live direction sessions, table reads, or rehearsals. You can also get those same features in any videoconferencing solution, e.g. Zoom, Google Hangouts. One thing missing from Discord is an ability to record calls. I had a Discord call this morning with two actors to do a table read (an informal rehearsal where actors have the script in front of them). I just ran audio recording software separate from Discord to capture the meeting, and sent them both MP3s after the call.

The transparency of public conversation on Discord helps build trust. For example, I posted this message to check that all cast members had successfully received payment.

Group messaging has more value in establishing trust than contacting people individually via email or DMs. Implicit in this group post is the assurance that any payment problems can be made visible quickly. Cast members can talk with each other and compare experiences. I’m not an unscrupulous director/producer, and I doubt you will be. But it’s hard to prove that to strangers.

An Actual Discord Server with Auditions You Can Look At

I’m inviting you onto my Discord server so you can see for yourself a real-world example of running auditions through Discord. Just click that link off to the left, and it will take you to the right place in your browser – no app install needed.

On the #casting-discussion channel, you can scroll up to 6/23/21 to see the end of the casting call and people’s feedback on how it went. After getting lots of nice compliments, I cajoled people to give some constructive criticism.

That’s where I learned that some actors were initially doubtful about holding the auditions on Discord as opposed to email. Essentially, they were worried about it being unprofessional or inefficient. There’s probably a group of actors I’ll never hear from that quietly left after deciding they didn’t like public auditions through Discord. But overall the feedback was very positive, with some actors even asking me to convince other voice directors to run auditions the “Discord” way. That’s one of the reasons I’m writing this article touting the advantages of Discord auditions.

To give you an idea of the auditions themselves, see the channels listed under the “GK1 Closed Auditions” category. There were many amazing performances. It’s not hard to imagine a similar level of talent auditioning for your game. 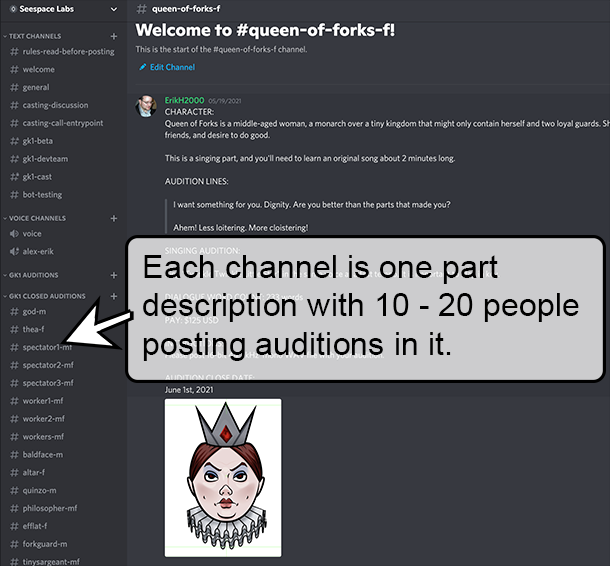 Discord or Email? To simplify your decision, here is what I recommend: Use the standard audition-by-email approach if any of the following are true:

Otherwise, I say run your auditions on Discord. And have fun with it.

If you’ve done everything described so far, you’re ready to write your casting document. What will it have in it?

Instead of me describing in excessive detail what goes in the doc, just have a look at this example casting doc that I adapted from my real casting call for The Godkiller in June. You can click that Google Docs link, make a copy, and edit the copied doc to match your game.

If you’re using email-based auditions, then your casting doc will be what your casting call announcements link to. Actors will look through the doc to find the parts in which they are interested, and then email you their auditions.

If you’re using Discord-based auditions, then your casting doc is just a private place to compose text before you copy it over to your Discord server in channel posts. Discord isn’t a great place for crafting work-in-progress text, so you’re better off composing it elsewhere.

Your audition deadline should include a date, time, and timezone. E.g. January 2nd, 11PM GMT. Don’t use midnight as the time – it leads to confusion as to whether people have an extra 24 hours or not from the beginning of the day.

You might be tempted to cast some great actor with a strong audition and close auditions before your posted deadline. No, don’t do that!

Accept auditions until the deadline and honestly consider them all – from earliest to latest. Many voice actors have time management strategies designed to maximize their chances of finding work. They might be hustling hard to respond to other casting calls, deliver work for clients, or other things. You’ve wasted their time if they read and think about your info, make plans to audition for you, and come back later to find you’ve closed down auditions early.

How long should the auditions last?

I like keeping momentum and focus by limiting delays. One week seems to be about the shortest duration that doesn’t lose auditioners due to availability issues. I think that’s probably because there are voice actors that have preferred recording days of the week. So if your duration spans a week, you’ll hit most everybody’s preferred times to record.

Casting Rounds – When It Won’t All Fit in One Week

Suppose you have many, many parts to cast. That was my situation with 50 parts to cast through auditions on The Godkiller – Chapter 1. If I ran auditions for all those parts in one week, it would have been bad. Like Fyre Festival “bad”.

So I just split casting into 4 separate rounds, each one with 10 or so parts up for grabs. (Click the image below if you want to see the planning spreadsheet.) Each of the four rounds had a separate casting call that I announced on social media.