Game Translation Fails - Common Causes and How to Avoid Them

While they're usually funny encounters, when localization fails happen to your own indie game, they're not as funny anymore. We detail their most common causes, so you can avoid falling into these traps.
Damien Yoccoz
Blogger
October 13, 2020 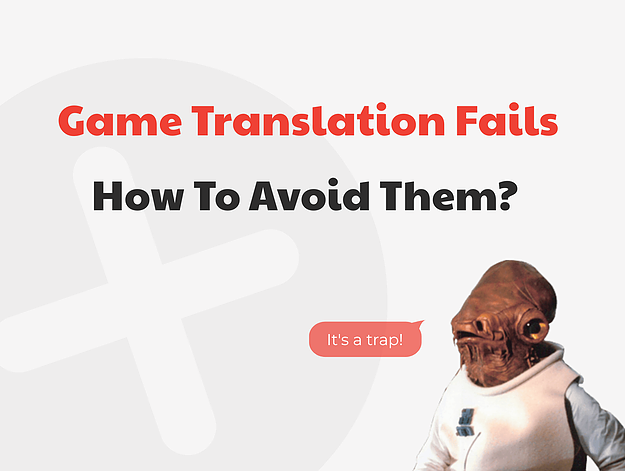 We have all come across localization fails. While they're usually funny encounters, when they happen to your own indie game, they're not as funny anymore.

Translation errors, at best, will provide a quick giggle and temporarily remove players from their immersion in the game. But at worst, they can completely confuse a player while making the game unplayable, and can even offend your audience, depending on the nature of the issue.

So what causes game localization fails, and how can you avoid them?

There are tons of data and files involved in a game localization project. Without proper preparation, your localization team won’t be equipped for success.

Those files need to be organized logically. For best results, they should be easily editable text files or spreadsheets.

Working from a game engine or a similar tool will slow down your localization team and reduce the time they have to actually translate your game with the quality it deserves.

The fewer text files, the better. However, resist the urge to dump everything into a single file and leave it at that. Your content needs to be organized so that your localization team can easily find the sections they are looking for.

Your dialogues and cutscenes should be organized in the same context in which they appear in the game (don't group lines per character for instance). Additionally, genders and plurals should be correctly identified.

Make sure you also prepare fonts that will work in your targeted language. If you are localizing your game in Japanese or Russian, for example, does your font family contain the appropriate alphabets?

If you’re low on your budget early in your development, you can always use a placeholder localization—as long as you remember to replace it with a better-quality translation later. For placeholder translations, you can use machine translations like Google Translate or DeepL, or even decide to go for fan translations.

However, these solutions typically don’t hold up for a polished final product and can lead to messy results, thus breaking the immersion for your players.

Machine translations like Google Translate don’t understand the context, humor, and other subtleties of the human language.

And fan translations tend to be hit or miss when it comes to quality, since they are not done professionally and often lack consistency due to the disorganization of the project.

Additionally, if you decide to cut down your costs by hiring non-native speakers—or non-professional translators—you may well run into problems.

Non-native speakers might not have the deep understanding of the language and culture that’s needed for a seamless end product. Professional localization companies hire native speakers for each language they work in, and this does require a bigger budget than bootlegging your project.

When it comes to non-pros, you won’t necessarily get a bad localization project, but you need to be cautious about who you choose. Make sure you vet them for quality and ask for references and portfolio pieces.

If you do have a low budget, but don’t want to rely on a non-pro, there are indeed low-cost agencies out there that provide general translation services. However, be warned that such agencies don’t specialize in games and often offer poor working conditions for their workers.

Ultimately, this may negatively affect the final output of your localization project.

Rushed translation due to lack of time

Game localization works just like any other component of game development—rush it and you run the risk of creating spectacular fails!

Sure, you can always fix these issues post-launch. But first impressions count big for your players, and they don’t forget.

A high-quality translation should provide no more than 2,000 words per day, per translator.

This means that if you have a solo translator working with you, you should not expect them to advance at a faster pace than 2,000 words per day.

When rushed, your translator will not have the time to carefully translate everything in your game with the context and quality needed to make the localized version just as good as the original.

You will also need to budget some time to get involved in the localization project. You cannot simply send your strings and magically wait for your localized files to appear a few weeks and months later. Any localization team worth their salt will need to have access to your development team to answer their questions and get reference materials as needed.

And the less prepared you are, the more time this will take.

If you design your UI with only English in mind—or whichever language you are developing for first—you’re bound to run into trouble.

But English is particularly tricky. English is a concise language that takes fewer words to express ideas than other languages that use the Latin alphabet, like French and German.

This means your UI needs to either be dynamic, or it needs to be designed with the language that takes up the most space.

The task of foolproofing your UI rests entirely on you. No matter how great a job your localization team does, nothing will protect your game from a localization fail if your UI cannot contain the longer texts in other languages!

The most common cause of translation fails, by far, is lack of context!

Context is why human translators are still the only way to get not just games, but anything, properly translated.

Without context, a single word or phrase in your game’s first language could mean a handful of different things in other languages.

Remember to add the following to your localization kit:

It’s hard to remember that not everybody knows as much about your game as you do. Don’t leave any room for misinterpretation.

Culture is the reason why you need a native speaker to handle your localization project. Word-for-word translations, even when taking context into account, still fail to take full account of the cultural aspect that could influence the meaning.

Sometimes, entire phrases or conversations will need to be reshaped for the strings to make sense in a given culture.

In other cases, differences in dialect will call for a vastly different translation.

For example, if you are translating a game into French for a European audience and get a French Canadian to do it for you, your target audience most likely won’t connect with your game due to the huge differences in both cultures and dialects.

Translators should be an integral part of your game development team—as early as possible.

But it’s difficult to make them feel included when the right conditions are missing:

When this happens, it can lead to a lack of care in your project, which inevitably causes game localization fails.

At Level Up Translation, we care for our team AND our partners. Reach out to us to discuss your fail-free localization project!