SEARCH
A minimum of 3 characters are required to be typed in the search bar in order to perform a search.
DISCIPLINES
8 min read
article

The new social games movement is an incredible display of how much is left to explore in the art of video game creation. For years we explored better graphics delivered through rapidly evolving hardware. Sociality, so long a central part of board, card, and pen & paper games found its home in high-score screens and, interestingly enough, epic multiplayer experiences like Halo and World of Warcraft. In these incarnations we explored the unsurprising notion that people might rather play with others than alone.

The Real Time Strategy (RTS) genre also falls into this category. Games like Command & Conquer and Warcraft III created entire communities of fans that got to know one another through playing and posting on official forums. So it shouldn’t come as a surprise that people who have designed socially engaging games for years are the ones that I’d pick to make a very organic transition to the social games of today. Let’s cover some the cross-compatibilities below.

Most RTS designers agree that a “dual brain” approach to RTS is the most tantalizing. This is one of the most sophisticated and complex game mechanics in all of gaming. The designer creates a full “circle of life” in which the player must gather resources, build infrastructure, use the infrastructure to build fighting units and more resource gatherers, hunt the enemy, lose units, and then replace them with the resources accumulated. It’s a great example of how RTS hits both sides of the brain to become a more interesting game experience. Gathering, building, and healing on one side; spending, fighting, and destroying on the other -- all in one tight package.  To me, this feels balanced, natural, and inherently easier to understand because it’s similar to the real world in a way.

This kind of thinking fits right in to freemium and social games, which are sometimes blamed for the lack of deep or meaningful gameplay. The solution is right before our eyes:  to create a complete and natural circle of life, deepening the game and increasing the player’s perception that his or her choices matter.

RTS games have the best economic micro-models out there. Gathering, buying and selling are an important part of most RTS’s and the same is true for most social games. RTS designers must understand the fundamentals of economics when they build their games -- just like freemium and social game designers. Not having a grasp of how money flows in your game can be disastrous. If a unit is too cheap, then that’s all anyone will buy. Too expensive, and it gets forgotten. Same is true for items in social games. Charge too much for tractor fuel and the player base will grow uninterested. Charge too little, and it will short-circuit the game. Designers of open-ended economic systems don’t understand how important this is because most of their items only tie back to the game by making the player more powerful which is balanced in the level. When you have a game that lives in a cyclical pattern, one mistake in the economics can cause the game to spin out of control or lose all its energy.

Simplicity leads to complexity in social games and in the RTS genre. If you distill the actions of each type of game you can start seeing some very simple systems at work. What makes both more interesting is that they create layers of other simple systems on top of each other to deepen the experience. For example, an RTS that was only about moving units around would be less interesting that an RTS that is about moving units around and fighting with them. Same is true for FarmVille. As systems are layered in a linear fashion the impact on human perception is exponential.  Meaning that, as a player views it, 5 systems feels like 6 but 10 systems feel like 20. The result is that eventually the number of systems overwhelms the player’s ability to tell them apart and his sense of the game changes to seem like something much bigger than it actually is. The best example of this is World of Warcraft. You can deconstruct it down to its many systems, but when you’re playing it they overwhelm you and give you the feeling that it’s even more massive than it actually is (and WoW is pretty massive).

FarmVille doesn't overload its players with too many systems at once


[Gameplay at the Speed of Light]

I read somewhere that the fly is one of the most rapidly evolving creatures on the planet. They attribute this to the fact that they produce so many offspring and live very short lives. The result is that in one human lifetime there will be thousands of generations of flies – mutating and naturally selecting the fittest to carry the species forward. If we consider lifespan and possibility for mutation the key factors to a rapid evolution for a moment, we can attach lifespan to the length of one game loop and mutation to the possible variations in player choice. In both RTS and social games, the game loop happens very quickly (although for different reasons).This allows us to find errors in the design very quickly. Also, player choice is at an all-time high in RTS which allows us to understand player behavior and preference much quicker than in other game styles.

There is also the issue of information transmission. In social games a great deal of knowledge must be passed as simply and quickly as possible to the player so they don’t get bored. In RTS the same is true, but it must be done quickly so the player doesn’t get killed. Slow information is the norm in other genres (with the possible exception of first-person shooters) and that speed and complication of delivery won’t work in social games.

Lots or games have been really great at gathering communities around them. In fact, it’s easy to argue that anything great naturally creates a community of fans around it. This is exceptionally true for RTS games – I’ve seen it happen from the front row. Perhaps it’s the intensity of the play or the skill required to play but the RTS genre has one of the most active and loyal fan bases in the world. Even 15 years ago, when we launched Command & Conquer, considerations for how to support the fan base with infrastructure were part of the game’s development. And those were the BBS days (pre-internet as we know it). Understanding and working with fans is part of advanced training for RTS designers. Those with such skills at Liquid have been applying them to the social games we’re working on, interfacing with fans and making the best of all the analytics we have access to.

Once I was playing a console action game and was forced to leave it for a week. When I was able to get back to it, I couldn’t play it anymore. I was forced to restart from the beginning and as a result never got around to finishing the game. These games are linear difficulty progressions. Once you start, you don’t want to stop until you’re finished. RTS is different. In the space of 90 minutes or less you’ll have played an entire play session. Yes, there will be much more to the game, but the fundamentals repeat and each new session starts you in the same way as the last. The power of this is in the approachability. Because more of the learning is mental rather than muscle memory you lose it at a much slower rate. What this means is RTS is easier to come back to than something that is more dexterity-intensive like a shooter or action adventure title. When designing social games, approachability is a secret strength. If I can’t figure out what I was doing -- or how -- I’m going to stop playing. 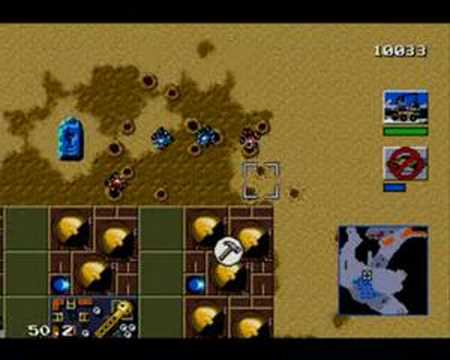 Dune II: The Building of a Dinasty was approachable enough to suceed on a 16-bit console

It’s definitely ironic that one of the most hardcore genres in gaming lends itself so well to one of the least. To see how well a willing RTS designer can apply everything he’s learned to social games is a beautiful thing. It’s very natural. It makes me see games not as a linear scale but more of a circular continuum – a “Circle of Gaming,” if you will.
As a company with a long history of RTS development, it was wonderful to see our designers embrace social gaming and be able to apply their skillset right out of the gate. The compatibilities between the genres allowed us to properly understand and serve our new fans while introducing deeper game mechanics within socially accepted frameworks. So, when gamers are looking for a great game on Facebook, Google+ or smartphones, we’ll be there for them.