Omdia polled over 5,000 consumers to gain insight into consumers' awareness and uptake of cloud gaming services in the US, UK, Germany, Japan and China.
George Jijiashvili
Contributing Writer
December 07, 2020

Omdia polled over 5,000 consumers across five key markets to gain insight into consumers’ awareness and uptake of cloud gaming services. Although cloud gaming services have existed for many years, the real momentum has only started to build in the last two years; driven by large game publishers and tech giants who, with their immense network infrastructure, compelling consumer offerings, and vast marketing budgets have accelerated this industry shift. The findings of the survey underscored the embryonic state of the cloud gaming market.

Only 18% of all respondents knew about cloud gaming services - 5% were existing subscribers and 4% were planning to subscribe. The global cloud gaming market is currently small, generating $1.4bn in 2020, or about 1% of the consumer spend on games. Over the next five years, it will expand at an impressive CAGR of 54%, with total annual revenue reaching $12bn in 2025, or about 7.5% of total consumer spend on games across all formats (see Omdia’s Cloud Gaming and Subscription Revenue Forecast 2020-25). 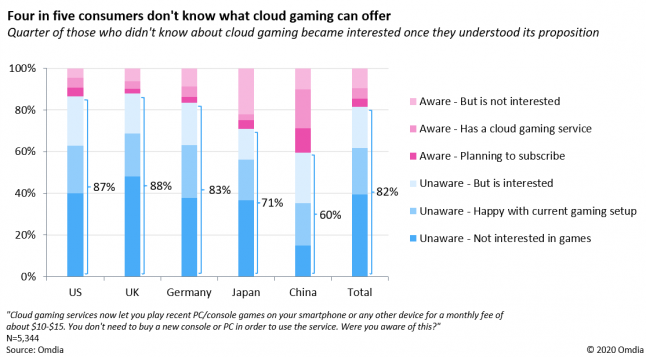 An outlier was China, where 19% of respondents said they had a cloud gaming subscription service. This can be explained by the fact that the survey was largely conducted in provincial capitals such as Beijing and Shanghai – cities where telcos are heavily promoting 5G. In these regions, the leading telcos including China Mobile, China Telecom and China Unicom bundle their own cloud gaming services with 5G network tariffs either for free or at very low cost. This therefore serves as a good indication for what to expect in China as 5G is rolled out to more regions in the future.

Public launches of cloud gaming services from Google (Stadia), Microsoft (Xbox Game Pass Ultimate) and Nvidia (GeForce Now) have solidified dedicated gamers’ familiarity with the concept of cloud gaming. Casual gamers, however, have remained largely apathetic to it, but we believe this will not be a significant barrier for service providers targeting this consumer segment. The likes of Facebook Gaming, Hatch and several white-label telco services emphasise instant playability of games, without focusing on the technology. This approach is most evident on the Facebook Gaming platform, where the new cloud gaming titles are offered alongside existing HTML5 Instant Games. Therefore, it’s very likely that soon, many casual gamers will be unknowingly playing games in the cloud.

Most of the vital pieces are now finally coming together to make cloud gaming a viable option for both serious and casual gamers; this includes rapidly expanding fast internet connectivity globally, 5G rollouts, improved video streaming technology, and the growing availability of appealing content. Its resurgence is setting in motion a trend that will have a lasting effect on all players in the technology, media, and telecoms (TMT) sector in the future.

Omdia’s survey was conducted in November 2020 on desktop and mobile devices. 5,344 respondents in the US, UK, Germany, Japan and China were asked: "Cloud gaming services now let you play recent PC/console games on your smartphone or any other device for a monthly fee of about $10-$15. You don't need to buy a new console or PC in order to use the service. Were you aware of this?" Broad spectrum of age groups were surveyed, however results are not nationally representative.