SEARCH
A minimum of 3 characters are required to be typed in the search bar in order to perform a search.
DISCIPLINES
9 min read
Blogs

Part of my series of blog posts containing sections from my honors thesis on extended fiction in game design, this section discusses ludoethical tension and how it's used as extended fiction in Life is Strange and Hellblade: Senua's Sacrifice
Austin Anderson
Blogger
June 04, 2019

High scores. S ranks. Victory screens. Upgrades. Saving the princess. All are traditional goal states for the players of video games, and for good reason. Whether in games with or without narrative, competitive games or single-player experiences, quantitative representations of success and progressing mastery are deeply satisfying and motivating for players. Jane McGonigal states in Reality is Broken, “Fun from games arises out of mastery. It arises out of comprehension....With games, learning is the drug” (McGonigal).

This is what Milan Jacievic , a researcher at the Center for Computer Games Research at IT University of Copenhagen, reflects on as the “implied player”, and goes further to separate from the player as a person, the “implied being”;

It stands to reason, then, that clever designers in games would seek to undermine the relationship between the implied player and implied being for critical purposes. This is done in many examples by introducing narrative reasons to perform poorly, lose, or otherwise forfeit success for a greater ethical narrative purpose. Extending the fiction to include the implied player’s goals is a great way to create conflict within the implied being. Part of them wishes to perform well, as many have been conditioned to do by years of traditional games (not just video games, but other forms of competition and achievement as well). But this part of their psyche is challenged by the ethical or narrative structures the game presents, and so their own value structure in relationship to the game is challenged. Jacievic calls this “ludeoethical tension”, describing it as “evoking a feeling of tension in the player between ludic ability (and the need to exercise it to progress in the game) on the one hand, an ethical inability on the other” (Jacievic ).

A great example of ludeoethical tension takes place in the game Life Is Strange, a narrative adventure game developer Dontnod Entertainment released in 2015. The game’s protagonist, Max, finds herself with the ability to rewind time, and the game takes place around decision making and puzzle solving elements with the ability for her, and ultimately the player, to reverse time at any point and try to mold events to their desired outcomes. Most narrative adventure games such as Life is Strange or Telltale’s The Walking Dead are based heavily on a structure that changes events drastically based on player choice, with events in game that take place 20 hours after a decision sometimes being influenced by an earlier player choice. Often, the culmination of these decisions is the reward for the player; a grand climax that takes into account a large number of player decisions and combines them to drastically influence the ending.

Life is Strange handles this in a peculiar but intensely interesting way; at the end of the game, a choice is presented. Throughout the game, Max’s main goal is to try and help her troubled friend Chloe, who’s prone to finding herself in life-threatening situations that require Max to rewind time to save her. But Max’s usage of her time travel powers has had an unintended effect on the world around her, causing a massive tornado to form and threaten her home town of Arcadia Bay. It’s made clear at the end of the game that there is a binary choice: take shelter with Chloe and allow the tornado to destroy arcadia bay and everyone in it, or rewind time all the way back to the first instance of Max saving Chloe, and allow Chloe to die so that Max never causes the tornado to form in the first place. 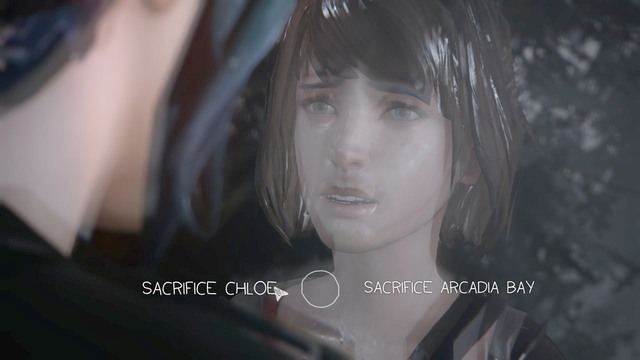 What’s presented here is much more than just a terrible choice for a person to make, it’s also a choice for the player. Do they metaphorically throw away all the effort they made in the game to save Chloe in order to make the ethical choice? The game presents the ethical choice as one contrary to the goals of the player throughout the entire game. All the player’s successes and carefully made choices will be diegetically lost, and more importantly, the goal of the game as was understood up to this point, which was to help the troubled Chloe, will be an abject failure. It’s a moment that causes great frustration and emotional turmoil in the player, not only because of the inherent tragedy of the on-screen events, but because of the inherent ludic sacrifice the player will have to make, whether of their ethical grounds or of their personal attachments to game-oriented success.

In a more direct example, Manhunt presents a similar conflict between implied player and implied being, described in Manhunt – The Dilemma of Play;


In a macabre twist, the player is awarded extra points for completing more gruesome executions. Within the context of the game, points serve no function or purpose. In the game, nobody knows or cares that you, the player, got more points. Their only purpose seems to be to tempt the player. To force the player to question how much he really values what is essentially a meaningless measure of achievement. How far would you go for a few points more? As a game player, how do you value your competitiveness and achievements as a player (get the most points) versus doing the right thing in the context of the narrative? What does it mean to be a good player? (Zagal)

Herein lies a direct and clear example of ludoethical tension; while traditional goals of video games revolve around high scores, and gaining points being an ultimate good, Manhunt and games like it create great discomfort in the tension they create between the classical conditioning players have to score more points, and the great moral stress inflicted on them through performing the actions required to get more points.

Another, albeit brief example of this narrative device is present in Hellblade: Senua’s Sacrifice. Hellblade is a game with surreal themes, where the titular character is experiencing extreme psychosis and is accompanied at almost all times by voices in her head, manifesting to the player as binaural audio. These voices are sometimes helpful, like when they warn the player of incoming attacks, and sometimes malicious, like when they taunt Senua throughout the game. The game takes place from a third person standpoint, with sword-based combat regularly occurring throughout the game, that requires the player to perform well to defeat enemies and move on. In the climactic battle of the game, the player is presented with a horde of enemies that respawn infinitely. The only way to complete the battle is to allow the enemies to kill Senua. This is prompted by the voices Senua hear encouraging her to “let go, let go of your battle” (Hellblade). This prevents a somewhat different ludeoethical tension within the player; they must abandon learned practices of fighting and struggling against monsters for Senua to finally find peace and let go of her inner demons, those demons being her struggle to come to terms with the death of a loved one. While not as sacrificial as the player choosing to nullify the struggle they had against the game for the ethical choice in games like Life is Strange or Nier: Automata, it does bring about a similar emotional effect as was achieved with Emily is Away; the player must choose to stop struggling against the enemies that face them, give up any hope of ludic victory, and let go, in the same way that Senua must give up her struggle and come to terms with her loss. “As she learns to accept death Senua also learns to accept her own darkness — and the fact that it'll always be with her.” (Williams)

This game design relies heavily on player attachment to the game’s narrative. For example, if Arcadia Bay of Life is Strange felt like a wooden town with uninteresting or even despicable characters, very few players would feel ethically motivated to save it from destruction instead of losing the well written and complex character of Chloe, who represents in many ways the repeated success of the player. If the player had no attachment to the survival of Senua from Hellblade, the final surrender would be a pointless and uninteresting twist. First and foremost, games that wish to create ludeoethical tension between implied player and implied being must have compelling stories and characters, and gameplay that provides value to the implied player. Games that don’t offer significant motivation for the implied player cannot create ludeoethical tension if the player is easily motivated to abandon the gameplay achievement in favor of ethical choices. Following those two daunting requirements, it’s a simple matter of providing a situation which pits the player’s sense of morality or attachment to narrative against the game’s traditional gameplay success states. The intrinsic conflict this design philosophy causes within the player creates markedly impactful gameplay moments, immersing not only the player, but their motivations as a part of the game and it’s narrative.

To read other entries in this series, check out my Gamasutra blog http://gamasutra.com/blogs/AustinAnderson/1028242/, or check out the full thesis on my website at http://austinanderson.online/thesis

8 Games that revolve around very little second to second reflex based gameplay, instead implementing more choice and puzzle based adventures.

McGonigal, Jane. Reality Is Broken: Why Games Make Us Better and How They Can Change the World. Vintage, 2012.