SEARCH
A minimum of 3 characters are required to be typed in the search bar in order to perform a search.
DISCIPLINES
8 min read
Blogs

Part of my honors thesis on extended fiction in game design, this blog post contains the section on Dark Souls, providing analysis of the themes and mechanics of the game and how they extend the fiction to include the other players.
Austin Anderson
Blogger
May 31, 2019

The Souls series of games, consisting of Demon’s Souls and the Dark Souls trilogy, have become synonymous with grim worlds and grueling difficulty. The series takes place in harsh medieval worlds, once grand kingdoms of men now fallen, becoming a land of decrepit castles and grisly monsters. The tone of the Souls games also evokes feelings of intense loneliness, best described by author Matt Sam;


The emphasis on loneliness is important to create an atmosphere of dread and despair in Lordran. The world is meant to encompass a truly dark and ugly air, as detailed by nearly every location and every character in the game. In fact, it’s not even just the player that’s alone: it’s everyone. In the Tomb of the Giants, Nito is alone, in the Painted World of Ariamis, Priscilla is alone, at the Kiln of the First Flame, Gwyn is alone. Everyone in Dark Souls is alone. (Sam)

Even the player-controlled heroes at the start of the game are warped undead, hideous figures with wrinkled yellow skin. The entire tone of the world is one of brutality and sorrow, with the gameplay being no exception.

The gameplay is tonally consistent with these themes in that the second to second gameplay is especially ruthless; one mistake can lead to quick death, so much so that the “You Died” screen from Dark Souls has become infamous in gaming culture (Dark Souls / Memes). The games are even more difficult due to the lack of available information. After the game’s tutorial, where to go, what to do, and how to progress are all unexplained and intentionally obfuscated. The player doesn’t have so much as a map to show them around the world; the entirety of this world and its terrifying daemons must be conquered with almost no presented information on how to do so. For most any other game, these would be unforgivable flaws. Conveying information to players so that they can feel competent and progress is key to retaining players and providing a good gameplay experience. Games cater to the player, making it convenient for them to enjoy the core gameplay loop of the game, where the challenge traditionally resides. The obtuseness of the Dark Souls games makes them incredibly difficult to jump into and play.

Through combining themes of loneliness with the merciless nature of the player’s interaction with the world, the creators of the game create great need within the player for direction. Through the other themes of the game, they also encourage that cooperation, in a fascinating way that maintains their fiction while implying the creator’s intent. Dark Souls lore specifies that time in these games does not necessarily pass in a linear fashion. Best described by the character Solaire in the game:


“We are amidst strange beings, in a strange land.

The flow of time itself is convoluted, with heroes’ centuries old phasing in and out.

The very fabric wavers, and relations shift and obscure.

There's no telling how much longer your world and mine will remain in contact.

But, use this, to summon one another as spirits, cross the gaps between the worlds, and engage in jolly co-operation!"

This dialogue reveals that, in the realm of the game of the game, there are other diegetic heroes who have already completed the quest you are embarking on, that there are heroes in other variants of this world pursuing the same goals as you, and that there will be heroes after you, hoping to triumph over the same evil. In fact, players can leave messages in their world that will appear in another player’s world, and even summon spiritual remnants of other players, whether to learn of their activity or summon them for aid. The game very explicitly pushes the player towards collaboration, whether through observation or active cooperation, with other human player characters. This is described in No Mastery Without Mystery;


While playing Dark Souls, the player frequently encounters fleeting spectral presences (Fig 3). Ghostly fellow travelers keeping her company as she rests at a bonfire, adventurers engaging in combat against unseen enemies, warriors dying in battle: all appear momentarily before fading away from view. A diegetic justification is offered for this — early in the game, a non-player-character tells the player that, in Lordran, “the flow of time itself is convoluted, with heroes’ centuries old phasing in and out. The very fabric wavers, and relations shift and obscure... However, the full aesthetic effect of these presences is achieved once the player realizes the identity of these spectral presences: that is, that they are in fact other players, captured and re-presented in real-time as they engage in their own simultaneous playing of Dark Souls wherever (and whoever) they might be in the world. The ghostly figures travel paths different to the ones the player takes; they wear armor and wield weapons the player might not yet have discovered; they deploy techniques the player might not yet have learnt, or even known were possible. In short, they shadow the player’s own playing of Dark Souls with an intimation of all the “paths not taken,” revealing the vast space of possibility that is both hinted at and, simultaneously, closed off by the player’s activation of a single playing-out of the game. (Vella) 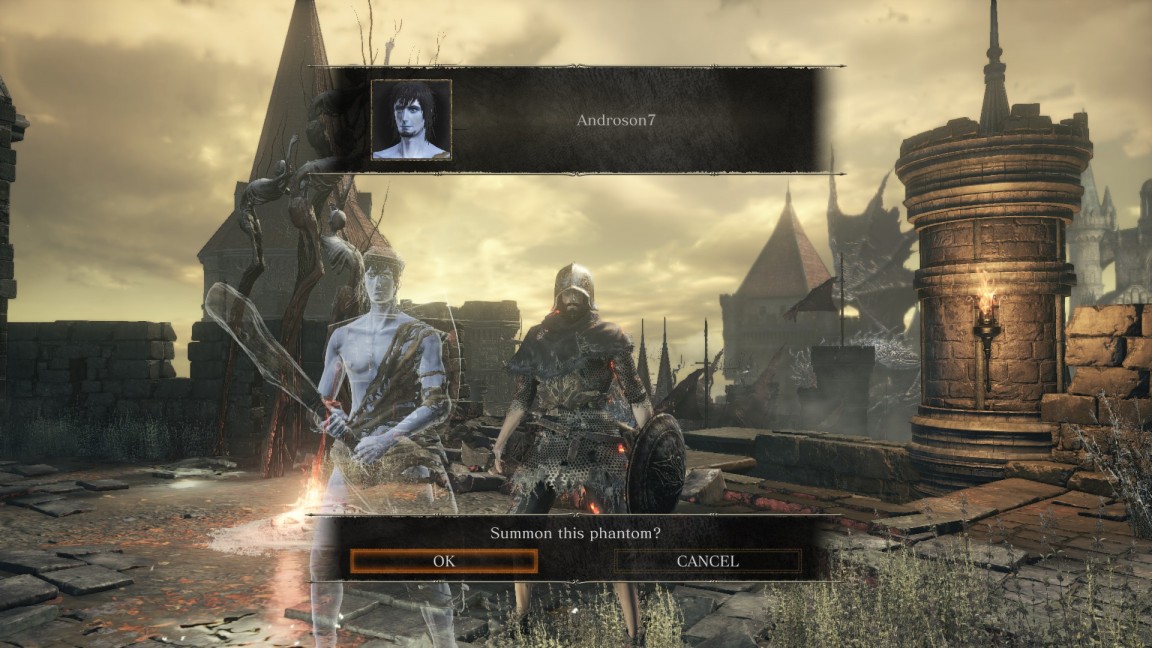 The game diegetically pushes heroes towards learning, taking advice and assistance from other heroes who have gone before and giving the same to heroes who will come after. This parallels reality in that there are players that have played the game before and gained knowledge of its systems and world, and that more players will begin the game every day who will need assistance to succeed. The game is so intentionally difficult and vague that it is incredibly hard to complete without guidance from outside sources.

What this implies is quite engrossing; the game is implicitly encouraging non- diegetic cooperation outside of the game through its diegetic themes. Indeed, this encouragement is not an explicit one, but the results speak to the intended effect, as the

Souls games have one of the most well-regarded internet communities surrounding a game. Jordan Palithorpe of Emerson College states;


(Dark Souls) effectively creates a discourse community and brings others together to figure out how to parse its systems. I think the majority who appreciate these games do so because it forces people to talk to each other. The game intentionally creates a viral moment of interest where everyone is trying to parse the game together, to uncover mechanical secrets and share strategies for progressing that would be incredibly difficult to do alone. (Hamilton)

Non-diegetic communities around games are certainly nothing new or revolutionary, but that the Souls series diegetically but not explicitly encourages non- diegetic activity is a fascinating technique with wonderful results. In terms of a cooperative metanarrative, Dark Souls is the outstanding example. Not only does it succeed in conveying feelings of loneliness in this large, desolate world, but conveys the necessity for cooperation throughout the game through hints and aid. The game’s community has grown to reflect this and is largely considered one of the friendliest gaming communities on the internet.

The design principles that accomplished this monumental achievement are not difficult to dissect and codify, but the principles themselves are incredibly risky undertakings. The game design philosophy of purposefully obscuring information is entirely antithetical to the traditional game design of empowering players with the necessary information to overcome game challenges. Furthermore, the reliance this game has on the community around it actually forming and becoming useful is massive; that the community would enthusiastically gather around the game is not a reasonable expectation for just any game. The steps the game takes are fairly simple: obscure information, require extensive amounts of effort to be put into understanding the game’s world and systems, and hope that the necessary player enthusiasm towards your game follows. The design of the Souls games is an incredibly confident one, and was only made possible by the strong theme, tonal consistency, and well-realized aesthetic. Creating a game in the style of Dark Souls is not a task to be undertaken lightly.

The game’s cooperative metanarrative, and its requirement for collaboration and focus on the importance of such, have had one of the most resounding effects on the gaming ecosystem in the medium’s history. The diegetic themes of these games have non-diegetically bonded the game’s player base together, teaching the player to understand these themes by experiencing them, pushing players into “jolly cooperation” in their struggle against the harrowing world of the Souls games.

To read other entries in this series, check out my Gamasutra blog http://gamasutra.com/blogs/AustinAnderson/1028242/, or check out the full thesis on my website at http://austinanderson.online/thesis

Vella, Daniel. “No Mastery Without Mystery: Dark Souls and the Ludic Sublime.” The International Journal of Computer Game Research, vol. 15, no. 1, July 2015.