Do you have to give up your dreams to make it as an indie dev?

How indie developers should treat their game more like a business and why doing market research doesn't mean you have to stop doing what you're passionate about.
Karl Kontus
Blogger
August 13, 2020

I have come across a lot of indie game developers who tend to fixate on creating their dream game, with no regard for if there are similar games already on the market or if other people would be interested in playing their game. Their focus is purely about making their vision a reality. Of course, it is extremely important to be passionate about the game you are making but you can keep the passion whilst also considering your future players’ likes and dislikes.

To be successful in any business, you need to have a vision, but you also need to understand your product, your audience and your competition. It’s exactly the same in game development. Conducting market research doesn’t have to be super time consuming but ultimately will help you create the game you have always wanted to make whilst simultaneously satisfying your players.

Is the indie game industry known for successful businesses? 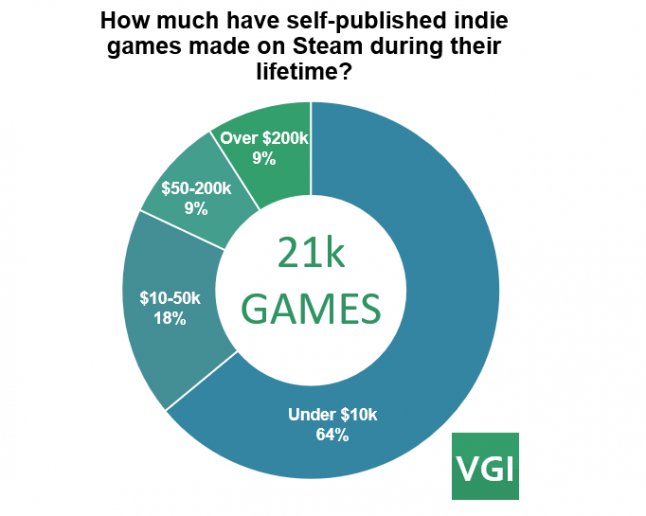 I believe that this is largely due to the above mentioned idea that some developers don’t treat their game as a business. The one clear difference between unsuccessful and successful games is the professionalisation of the development team. It’s not necessarily the games being better or visually more impressive. There are some pretty basic, but successful games and some very polished, but buried gems. The key differentiator is that most successful teams have a diverse skill-set, a part of which is business and marketing acumen. They’ve all done at least some form of market research before devoting a year or two on a high risk project. Weird, huh?

How to make a lot of money and be passionate about it?

As the title indicates, it’s time for some indie self-help. So, let’s explores the idea that you don’t have to sacrifice your principles and passion in order to treat your game as a business and do well at it.

Let’s look at the typical methodology behind picking a game to make in the first place.

I’ve heard a version of this quote many times now, so I decided to draw an answer to it. 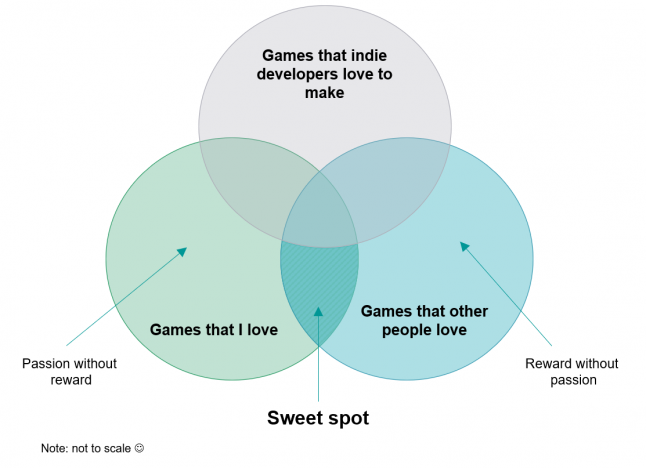 Doing market research does not mean you have to say bye to passion. It allows you to pick the best of all the routes you're passionate about. The 3 circles above demonstrate how the ideal game you should make is one that you absolutely are passionate about. On top of that, you’d want other people to also like it and, ideally, you’d want it to be something that hasn’t been made a thousand times before. How do you achieve this, you might wonder? That’s right. Market research.

Isn’t market research complicated, boring, scary and diverting my time away from actually making the game?

You don’t have to have a PhD in statistics to do some research. If you spend 5 hours on Steam, Steamspy and explore the game analytics tool on the Video Game Insights platform, you’ve already done more than most other small indie devs. Let’s look at it in the context of the 3 circles above.

Games that I love – You’ve already done the research on that. Good stuff, we’re 1/3 of the way there.

Games that other people love – Which games are trending on Steam / App stores? Which games dominate Twitch or get a lot of attention on games news sites? What are the features that these games have in common? What makes them stand out? Create a list of sub-genres, features and art style that popular games have. You can get a good sense from a couple of hours of research that doesn’t have to involve any hard data if you don’t want it to.

Games that other indie devs love to make – Have a look at Steam store, Steamspy and Video Game Insights and see what types of games have been released recently. Look at Twitter, Instagram and Reddit feeds – what kind of gameplay and themes do you mostly see posted by developers? Create a list of sub-genres that are super crowded and consider staying away from these.

There you go, you’ve populated your 3 circles with half a day’s work. Now put these together and make an educated decision on your future game. Of course, you can always go into much greater detail and spend much more time on the research to improve the quality, but even this will give you a strong head-start VS most other indie developers.

What does this mean for the future?

Don’t be discouraged by data and research. It doesn’t have to be complex and time-consuming to be useful. Research won’t derail you from doing something you like and are passionate about. It can, however, give your game development process a more professional approach.

Also, you don’t have to do this in the beginning of your development phase. If you’re half way through making a game, you can still benefit from research and steer the game towards the right direction.

I’d suggest just trying it out. Worst case scenario, you’ve spent half a day on looking at successful games similar to yours and learning about the future players of your game. Best case scenario, the statistics on indie game developer earnings will look a bit better going forward.

If you enjoyed this article, you might want to check our free market research platform and other articles we’ve written.