Despite Facebook's stumble, ads can still become a key - and positive - part of the VR ecosystem

Facebook's first attempt at VR ads on Oculus has fallen flat, but there is still room for ads to become a substantial VR monetization stream that the ecosystem badly needs. However, finding the right formats and contexts for VR ads will be crucial.
Matthew Bailey
Blogger
July 06, 2021

Consumer VR remains a niche industry, not just in terms of addressable audiences but also revenues. VR may have passed $1bn in content revenues in 2020, but it still represents a tiny portion of total media and entertainment revenue. 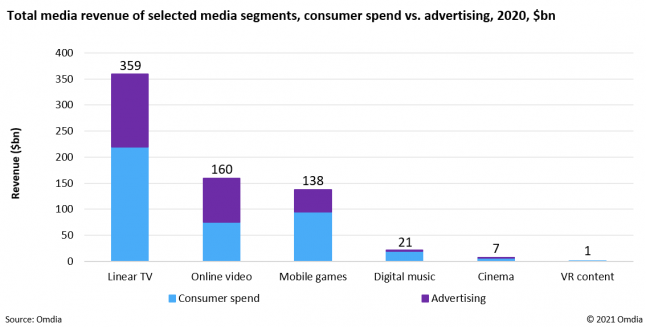 Indeed, previous generations of hardware – typically smartphone-enabled or expensive, tethered VR headsets – have failed to light the world on fire. This has meant that VR has remained a niche prospect, providing limited financial incentives and holding back large-scale investment and development in the sector with many players, such as Google, shifting focus to more immediately monetizable, mobile-driven augmented reality (AR) which has a far larger addressable audience due to widespread smartphone penetration.

While VR remains a nascent, dynamic part of the media and entertainment industry set to enjoy rapid growth over the next few years, user spend on VR content and services will not be enough to attract significant investment from most big tech companies, or support the development budgets required to transform VR into a mass-media proposition.

The exception here has been Facebook, which has continued to invest in its VR operations through Oculus and its recent actions have been largely beneficial to the newly rising tide of VR. In fact, Facebook’s Oculus Quest series of untethered VR headsets have spearheaded the drive towards VR becoming more accessible and affordable than ever before.

However, Facebook’s prominence within – and reliance on – the advertising market is increasing the viability of ad-funded, or at least ad-subsidized, VR games and other types of interactive media. Like it or not, ads are certainly emerging as a new VR revenue stream. And, although demand for such ads is embryonic, the underlying technology exists from in-game ad tech players, which enables advertisers to replace in-game assets with brand advertising messages on both a programmatic and direct basis.

Yet, to say Facebook’s first foray into VR advertising has not gone down well would be an understatement. June 2021, saw Facebook start testing ads within certain games and apps running on its Oculus VR headsets, leading VR gamers to make their displeasure widely known, and the first named developer employing Oculus VR ads – Resolution Games – pulling out of the program. Even so, VR ads are a natural extension for Facebook’s business at a time when it is running out of advertising real estate on its core social feeds and is actively seeking new contexts for ads across its properties to support future growth. Despite not going down well with users initially, VR ads will certainly remain a key part of Facebook’s long-term VR strategy as it moves beyond games to more social VR apps.

And, in the long term, if VR is to reach its potential and evolve into a genuine multimedia metaverse – complete with its own economy – it is almost impossible to believe that this will not involve advertising. However, crucially, this advertising will need to be tailored to VR worlds and contexts in the same manner as the content it will support if it is to become an effective channel for publishers, developers, advertisers, and – most importantly – consumers.

To be clear, VR ads must add to – rather than detract from – the consumer VR media experience. The standard, digital display and video ads consumers already see across the web and social platforms won’t cut it in VR – such implementations will rightly be seen as cynical and intrusive, especially if they are served in otherwise premium environments. Immersive ads within free-to-play content for new VR games targeting VR gamers will be an ideal place to start. New kinds of VR-specific and useful ad experiences can then be developed that will be crucial in attracting (positive) consumer attention, delivering meaningful returns for advertisers, and bolstering the top line of VR developers, publishers, and platform owners.

You can read more Omdia analysis of the opportunities and challenges in VR advertising in our latest report, Facebook, VR, and the future of advertising.