Debate: What Shakespeare Play Would Make The Best Videogame?

A dialogue between a literature teacher and a game designer (who are also father and son) about what Shakespeare play would make the best videogame.
Bobby Lockhart
Blogger
May 29, 2012
What follows is a dialogue between Rob and Kerr.  Rob is a video game designer in the Chicago area.  Kerr is a literature teacher in Newark, NJ.  Also, Rob is Kerr's son.
The posts will appear here on this blog and at Kerr's blog, which is here.
Their topic is: 'What Shakespeare play would make the best video game, and what would that game be like?'

Rob:  Hey, Dad.  So your first impulse was to say 'The Tempest' would make a great video game.  I think that's a great choice, but just for giggles I said 'Julius Ceasar' would be the best.  I have some ideas, but why do you think 'the Tempest' would work so well? 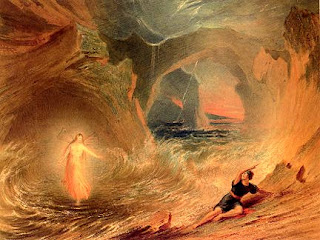 Kerr:  The obvious aspects that make THE TEMPEST videogame fodder is that there is magic -- in fact the central character is a magician -- there are strange non-human characters such as Caliban and Ariel, and the fantastic setting -- an unspecified remote island which can take on any terrain that the designers and directors choose.  There are also many separate story threads:  Prospero overseeing Miranda's entry into adulthood; Ariel's quest to be free; Caliban's desire to be seen as human; Prospero's revenge on Antonio and Alonso; Antonio and Alonso's plots against each other; the romance between Ferdinand and Miranda; the hijinks among Stephano and Trinculo, as manipulated by Ariel.  And then there is the magical disappearing banquet, not to mention all the strange magic surrounding the titular tempest.
Moreover, many characters grow and change and learn, which, it would seem to me, should be a good thing in a videogame, whereas in Shakespeare, such growth and change often happens to a single character, such as Lear, who is chastened by his experience, whereas everyone else has been merely punished by the consequences of his foolishness.
JULIUS CAESAR, for one, is particularly trapped by the facts of history.  It is one of Shakespeare's most accurate exercises in history, especially when contrasted with something like RICHARD III or MACBETH (which is based on a more legendary history) in which, largely for political persons, Shakespeare inverts the real historical heroes and villains.  Today we might say works like this are "inspired" by history.  But even they have a  hard bright line around them in the form of historical fact.  This closes down alternatives -- Julius can never not be killed by assassins; Macbeth can never not ascend to the throne and then be killed in battle.
Of course, I am conducting my analysis under a handicap -- I am not as familiar with the format of videogames as you are with plays in the theater.  I recognize that all games do have a closed ending, a conclusion, some point at which some players have succeed and some have not.  It raises a philosophical question -- as narrative aspires to closure, do games in a perfect universe aspire to perpetual play?  Is ending a game merely an acknowledgment of either our desire to identify winners and losers or our need to stop playing periodically and eat and sleep and attend to other bodily necessities?  Or do games also need to end as an inherent part of their nature?  And do we even need to address this question in order to further our conversation?
So I bounce it back to you, Rob.  Of all 37 or 38 of Shakespeare's theatrical works, what caused you to light on JULIUS CAESAR as a potential videogame?  Perhaps your answer will instruct me in an aspect of gaming of which I was unaware.

Rob:  Growth and change?  Don't you know videogames are all about shooting aliens in the face?
In all seriousness, I think JULIUS CAESAR would make a good videogame because of the emphasis on action and conflict.  As much as I enjoy it, THE TEMPEST seems to be a story mainly about people almost doing something, but then deciding against it.

I am a great and wrathful wizard! I will now carry out the revenge I have been plotting for...awww, who can stay mad at that face?

In JULIUS CAESAR Brutus and Cassius are forced to kill a dear friend for the sake of Rome, and Rome is bribed to side against them.  Then they must fight a war which was evenly matched until Brutus made a strategic error.

Certainly, the play was Shakespeare's most accurate (though it includes dubious incidents of ghosts), but that doesn't mean that the game needs to be 'trapped by the facts of history.'  To convert a play to a game means introducing some nonlinearity, so we can ask and answer a bunch of what-if questions in this game.

What if Caesar had found out about the plot?  What if he'd stayed at home instead of going to the senate?  What if Brutus were a better orator, or strategist?  We could even go so far as to change the setting entirely.  This story could be set in the Mafia of the 1930s, a Galactic Federation, or a Pirate Ship.

In contrast, THE TEMPEST must include a wizard and a fairy and a freakish beast-man.  There aren't a lot of settings that can accomodate that.

I think the many story threads of THE TEMPEST are a weakness rather than a strength.  The perspective of this play is not high enough to be a god-game or management sim, and not low enough for a first-person experience.  I'll admit that THE TEMPEST was a tempting choice, because of superficial similarities to fantasy-genre games, but I think there's less there than meets the eye.

Maybe I'm just lacking imagination.  How do you imagine a TEMPEST video game playing out?