"Another major draw for us was the ability of sound to create a deep sense of immersion quite different from what is possible with graphics," say the developers of Blind Drive.
Chris Kerr
News Editor
June 29, 2021

Blind Drive, a frantic, funny audio-only driving game, earned a nomination for Excellence in Audio with IGF 2021. Players will need to really listen and imagine the spaces they're driving in if they hope to stay on the road.

Gamasutra sat down with the developers at Lo-Fi People, the game's developers, to talk about what interested them in tying driving to an audio-only experience, what thoughts went into making tracks and roads you could navigate using sound, and how they used humor to ease up on the tension of this experience.

Who are you, and what was your role in developing Blind Drive?

We’re Lo-Fi People, a small collective of designers, coders, musicians, and filmmakers based in Tel Aviv. We’ve been active since 2008 when we met through art school and mutual friends. While each of us is an established professional in our field, we often get together to collaborate and share our love of creating playful and unconventional experiences for both physical and virtual spaces.

We’ve been working with and around game-related concepts ever since we can remember (modding LucasArts games in the 90s anyone?), and, as a collective, creating video game-inspired projects such as Milgrom, a stop-motion band arcade, and Human Sound Objects, a multi-participant soundscape installation. In addition, we’ve both been very active in the AR/VR/XR startup scene in Israel, where a lot of game interface design techniques, from racers and first-person shooters, are suddenly finding applications in productivity and everyday-use products.

Having said that, though, Blind Drive is the first full-on, no holds barred, nostalgia-infused video game we’re releasing as a studio. Blind Drive is a collaboration between two of us - Giori Politi and Doron Assayas Terre. Giori is an interactive artist and sound designer/composer for games and film, while Doron is an interaction designer and creative technologist specializing in AR/VR and immersive storytelling.

On Blind Drive, we designed the gameplay and overall experience together, while each focusing on his domain of expertise - Giori on sound design, level design, and haptics, and Doron on narrative design, programming, and visual effects. We were joined by Shira Nathan who created the graphic language of the game’s menus and Ariel Mann who composed the music. 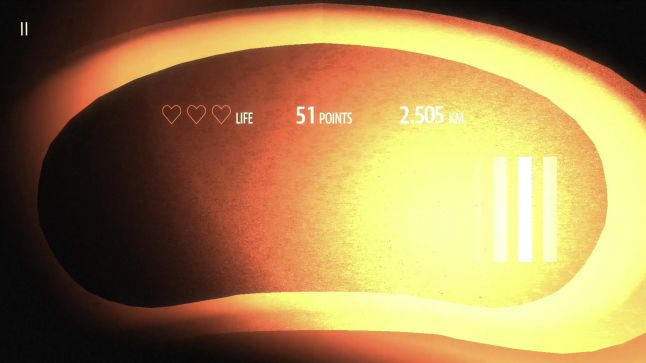 How did you come up with the concept for Blind Drive?

Blind Drive began as a Max/MSP sketch for an interactive installation. The concept was simple - how would people react to driving a car without seeing a thing?

Our original aim was to shock and inspire by placing players in a familiar everyday situation, but forcing them to re-experience it in an entirely new light - while discovering their ears can do things they never dreamt of.

At the same time, we needed a way to introduce the gameplay to players and connect all the levels into a coherent whole. After experimenting with a few techniques, we drew inspiration from our love of 90’s crime-comedy movies such as Pulp Fiction, Snatch, and The Big Lebowski and added a radio play/audiobook/podcast -style story that plays out over the phone.

The combination of those two themes - sound-based arcade driving + interactive narrative podcast - is what shaped the direction of the game.

The game is built and programmed in Unity, with sound design done in Cubase. Interactive binaural audio was originally made with our own custom engine, but halfway through development we switched to FMOD and never looked back. Narrative design was done with Twine together with Cradle, our own open-source story engine for Unity. Text-to-speech accessibility was built using the fantastic UAP. Haptic feedback for mobile devices was designed with the help of Lofelt Studio and Haptrix.

What drew you to make an audio-only game?

We’re all familiar with the sounds of driving, but are rarely conscious of them because most of our attention is on our eyesight. We wanted to flip the script and make a game that places all of our awareness on our ears, forcing us to rely solely on their amazing processing powers, which we often take for granted.

Another major draw for us was the ability of sound to create a deep sense of immersion quite different from what is possible with graphics. It encourages your brain to create its own rich imagery, like a custom-tailored VR experience. This was especially interesting for mobile devices - small screens but rich sound are the perfect platform for an audio game. It also allowed us to get away with some pretty wild scenes that would have been almost impossible to create visually! 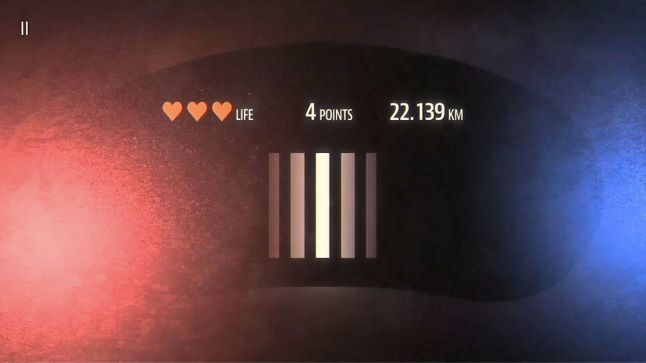 What difficulties did you face in creating worlds and gameplay situations around sound? What interesting opportunities came from it?

One of the biggest challenges was to balance the very realistic sound picture we were aiming for (immersing players in a fully believable car environment, with each sound layer at its familiar level), with the need for it to be interactive and playable. We had to do a very precise sound mix in order for this to work seamlessly, and keep the important game-related audio details clear at all times.

Another challenge was to craft the level design and difficulty curve. In the many hours we spent playtesting the game, we found it was hard to predict how good people would be at completing different levels. There was a very big range of skill levels compared to “regular” video games. For instance - a trained musician who is a hardcore gamer found the game really difficult, while a 65-year-old woman who never played video games in her life could pass levels easily.

Throughout development, we often felt tension between our desire to try a new, wild driving scenario (such as driving underwater or through a cattle farm) and the need to communicate it clearly enough to players so they can envision it. Every level needed its own careful combination of dialog-based intros, ambient soundscapes, road texture cues and character reactions.

Our favorite moments are the ones where the basic game mechanics are readily understood, but the actual meaning is wide open for interpretation. That is where imagination really kicks in and every player shapes their own scene in their mind. Ice cream is often involved.

What thoughts went into creating the mechanics of the driving? What drew you to use a two-button style?

First of all, taking away people’s eyesight is shocking enough already! We wanted to keep the actual steering mechanics as simple as possible to keep players’ focus on all the stuff happening on the road, not on basic car handling.

Why did you add the visuals that you did put into the game? What do you feel they added to it?

We’ve both worked on music video productions in the past and know the power of a well-timed animation to really amplify a sound and its emotional impact. Making your hearing the primary sense doesn’t have to mean canceling your vision. The way we thought about it is that, instead of making a video game with a soundtrack, we’re making a sound game with a video track.

But, except for a simple points and life tally, we didn’t want the visuals to provide any information. It was important for us to make the game just as fun with your eyes closed, which is actually how we recommend playing it.

The visuals did give us a little bit of screenshot material though, which is really crucial for getting a game to be noticed in the first place! 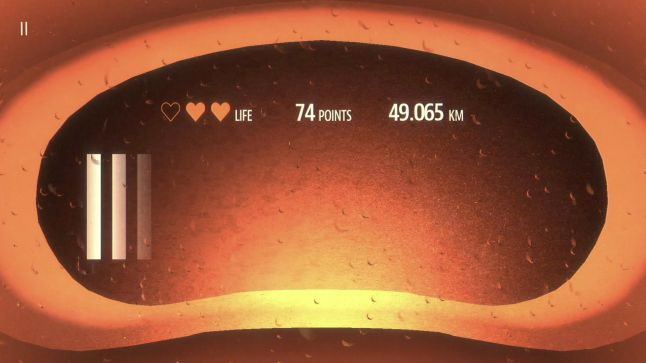 How do you feel that driving with only audio feedback made the gameplay special? What do you feel it did for its players?

The core game mechanic is based on a simple arcade racer which is familiar to most gamers and very easy to grasp. The “small” twist we added was to make this mechanic based on sound, not on image, creating an entirely new play experience.

Players’ responses to this were intense and fascinating. Panic and terror, zen-like concentration, adrenaline highs, and sheer delight. Some players jerked wildly and broke into a sweat while laughing. Discovering this range of emotions made us really want to build upon them, and we made a lot of effort to bring them all out throughout the game.

What drew you to make the game a humorous experience? What difficulties did you face in making a 'funny' game?

Audio games often tend to be dark, atmospheric, and slow, but we wanted to whip up a fresh, fast, exciting, and light-hearted number for people’s ears.

What we noticed in early playtests, though, is that people were taking the game very seriously - like it’s some sort of panic-inducing psychological experiment. We wanted players to ease up, enjoy the ride, and have fun discovering what their ears could do! So, we decided to add all the quirky characters, ridiculous situations, and witty sharp-tongued dialogs we could fit in and make it clear that yes, the game is a little scary, but please don’t take it too seriously.

Our fantastic actors - Zach Cohen as Donnie, and Gani Tamir as Grandma - really set the tone on that front with their immense talent, unique personalities, and playful improv, which made recording sessions an absolute joy.