Why Do You Need to Model

Inappropriate progression is often seen on a stage of the soft launch. We may observe that a player passes through the game too fast and content is exhausted after several days of playing. It could be that the player reaches high levels in the first two hours of playing and continues leveling up quickly.

The opposite situation, when a player is passing the level too long,  gets bored or frustrated which leads to a high churn rate.

Appropriate in-game metrics observation and analysis reveal these problems on the soft launch, but statistical simulations allow to fine-tune progression much earlier, on a stage of game design. This will help to avoid altogether or at least reduce progression-based problems and save time during the soft launch.
Below we are going to show an example of progression fitting by user’s behavior simulations for a case of a simple trivia game. The goal of the article is to show a general approach to the progression curve fitting based on simulations that can be undertaken on a stage of the economy design prior to launch.

A game consists of rounds with a set of 10 questions, each question has 4 variants of answers.  If the answer is correct, a player receives an XP reward and passes to the next questions. Giving the wrong answer, they should re-start the round from the 1st question. When answering all questions in a round correctly, a player receives a bonus and a higher XP reward. They also receive rewards when leveling up.

So, two sources are present: correct answer on the last question and a level up. We have to design a progression through the game to make these 2 sources occur reasonably often. This task consists of two subtasks:

Fitting Progression 1. Defining The Quantity Of Questions Per Round

Let’s characterize the player’s behavior by the probability of giving a correct answer. Guessing randomly on 4 variants of answer, a probability of being correct is 0.25. We expect that players will play better than random guessing, at least those who like our game and stays there.  If there is a competition with another real player, we may expect the probability to win as 0.5. In fact, such player most probably will leave our game. But we can take it as a lower-bound estimation. As an upper-bound estimation, we’ll set 0.9, meaning that player answers on 9 questions from 10 correctly. Actually, this means that questions are too easy and should be re-designed. So let’s take players with probabilities of winning as  0.5, 0.6, 0.7, 0.8, 0.9 to see the broad range of behavior. Here 0.6-0.8 are expected probabilities, 0.5 and 0.9 - are edge cases.

Let’s sample from a binomial distribution a sequence of events with lengths 5, 7, 10, 15, corresponding to the number of questions in a round and pass winning probabilities as a parameter of the distribution.  Repeat this 1000 times and calculate average (1) attempt at which a player reaches the last question, (2) length of the round.

As seen in Table 1, in the case of 10 questions in a round, a not very good player with winning probabilities of 0.5 - 0.6 needs to make around 200 or more attempts to reach the last question and get a bonus. In a case of 5 questions,  a relatively good player with winning probabilities 0.8-0.9 is reaching last question in around 10 attempts, which looks too often. Approximately 7 questions per round look more reasonable, but a bit fast too. In cases of 7 and 10 questions per round, an average length of a round is 1-3 questions for probabilities 0.6 - 0.8.

A good choice will be to take 9 or 8 questions per round and design the first one or two questions very easily. Then a player will reach the last question in about 30-60 attempts while the average duration of a round would be 2 - 4 (or 3 - 6) questions per round. Later, if deciding to put some limitations on the number of sessions per day or balancing currencies we should take into account these values.

The second step is to design an XP-to-level formula. If we are planning rewards on level up, we should make an estimation of how often they occur at the beginning of a game and later. At the beginning of a game level ups should happen often for better engagement, but then it should slow down, otherwise, there would be a continuous surplus of resources. 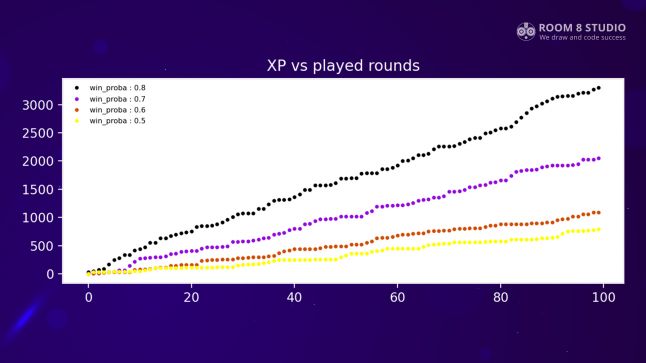 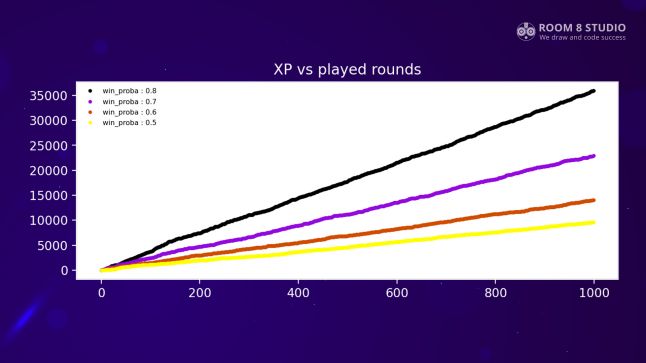 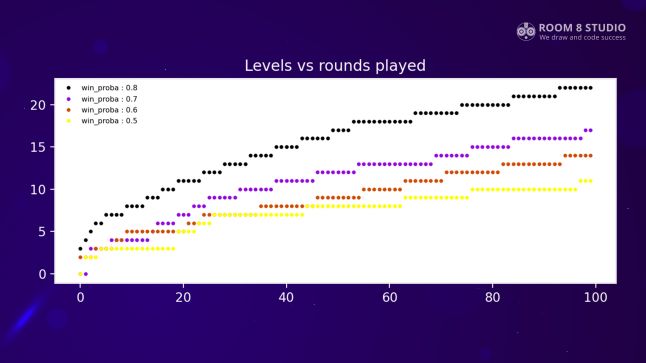 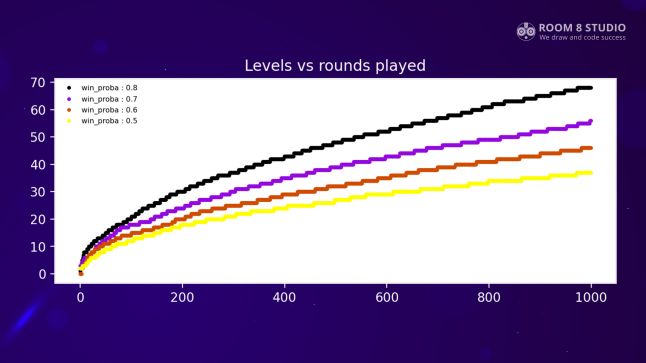 Figure 2 shows a reasonable level of progression for those players. They experience level-ups in the first 3-5 rounds then progression goes faster and they reach  7 - 15 levels at 30-60 rounds (when they expected to reach the last question according to estimations in the previous section). Then progression grows less rapidly and level-ups occur each 10th rounds for a good playing person and each 20th round for a bad playing person.

Balancing the game economy can seem like a daunting task even for the most experienced game designers. However, there are rules, guidelines, and models you can adhere to that can help you get the best out of your game and truly get started. If you don’t have the skillset on your team to model the game economy, the task can be easily outsourced.

Room 8 Studio team provides game economy support to clients on an ongoing or project basis on different stages. More information on our website, on the Game Economy Design page.

More about the level and economy design:

In the example of a simple trivia game above we designed 2 sources of currency, modeled a progression though game for players with different probabilities of winning. We saw a range of how often both sources occur for a better-playing person and worse-playing person.

In the next steps of designing and balancing sinks of resources, monetization strategy, feeding content into the player we should take into account these estimations we can take into consideration derived progression curves and frequencies of getting rewards.

Building a game economy requires expertise and experience: if you need some, Room 8 Studio's game design and game economy teams are always happy to help.