Competition Is Not The Opposite of Community

We use survey data from 270,000 gamers to break down the common assumption that the appeal of Competition and Community are polar opposites, and we explore where this idea came from.
Nick Yee
Blogger
March 27, 2017

As many of you know, Nic Ducheneaut and I focused on MMOs when we began our careers in games research. And in both the research and gaming communities of these online games, there’s a commonly-held assumption about how gamers fall along the social spectrum.

In its most basic form, the spectrum has warm, fuzzy, social care bears on one end, and on the other end are cold, anti-social, competitive griefers. Because the mechanics of social interaction first became salient in MMOs, there has been a tendency to overgeneralize lessons from MMOs to other game genres. For example, in this contemporary application of Bartle’s Player Types to gamification, the assumed dichotomy between community and competition is reflected in the Killer vs. Social player types.

This assumption is something we can directly test using data from the Gamer Motivation Profile.

Quantic Foundry's Gamer Motivation Profile allows gamers to take a 5-minute survey to get a personalized report of their gaming motivations, and see how they compare with other gamers. Over 270,000 gamers worldwide have taken this survey. The 12 motivations that are measured in our model were identified via statistical analysis of how gaming motivations cluster together.

Among the motivations we measure in the profile tool are Community (being on a team, chatting, interacting with others) and Competition (duels, matches, being high on rankings). Note that these two clusters of preferences were not defined apriori, but based on the clustering of highly-correlated survey items. In other words, gamers who say they enjoy being on a team are highly likely to also say they enjoy chatting with other players, and so forth.

Competition Is Not The Opposite of Community

We dug deeper to make sure it wasn’t men or women that skewed this correlation, and the correlation strength was nearly identical when we split the data by gender: r = .45 for men, and r = .43 for women.

Instead of being polar opposites, Competition and Community essentially both load on a single Social factor. Gamers who enjoy social interaction tend to like all kinds of social interaction, whether it’s chatting, or emoting high fives, or being on a team, or playing against another team. It’s all social to them.

This reality has always been staring us in the eyes.

If Competition were the opposite of Community, team sports wouldn’t make sense, and wouldn’t be such a dominant cultural phenomenon. There simply wouldn’t be enough people to fill all the positions needed in high school, college, and professional sports teams.

We’d have to believe that all these team sports players are somehow aberrant people and that their interests fall outside of the norm. Or we’d have to assume that all the people who play on sports teams are highly individualistic people who are just there for the competition but never found a solo sporting event to their liking.

Or that, somehow, this obvious alignment between Community and Competition in real world team sports suddenly stopped being true when people play digital games.

Even though the reality was right in front of us, we kept holding on to this incorrect framework for a variety of interconnected historical idiosyncrasies.

First, early MMOs rarely had well-structured competition among players. Instead, most PvP implementations tended to devolve into an endless gankfest—where over-equipped players could torment low level players. PvP quickly became associated with griefing, and then a long list of highly visible, anti-social behaviors got lumped together: spawn camping, newbie ganking, or (in Star Wars Galaxies) trapping someone in your house by blocking the door with a piece of furniture.

But putting furniture in front of a door isn’t competition at all. Ganking isn’t really competition either. And yet, the label “PvP” made it easy to assume that this anti-social behavior was inherently competitive.

Second, this assumed polarity also happened to reinforce gender stereotypes. It was easy to believe because it aligned with the cultural assumption that female gamers are chatty, social care bears, while male gamers are lone aggressors.

The Missing Construct is Conflict

When we developed the Board Game Motivation Profile, we realized we couldn’t just re-use the Competition factor from the video game profile because almost all board games are competitive. The preference that is much more relevant to board gamers is the appeal of Conflict.

In board games, players can compete in a variety of ways. On one end of the extreme are walled gardens where players build up something without interference from their opponents, and then the higher score wins when time runs out. Agricola is a good example of a low Conflict game. On the other end of the extreme are games where players can attack each other’s units, steal their resources, and counter their spells. Magic: The Gathering is a good example of a high Conflict game.

This concept of Conflict has been lurking in our discussion of Competition, and foregrounding it helps clarify what is actually going on. Let’s break this down for multiplayer gaming contexts. 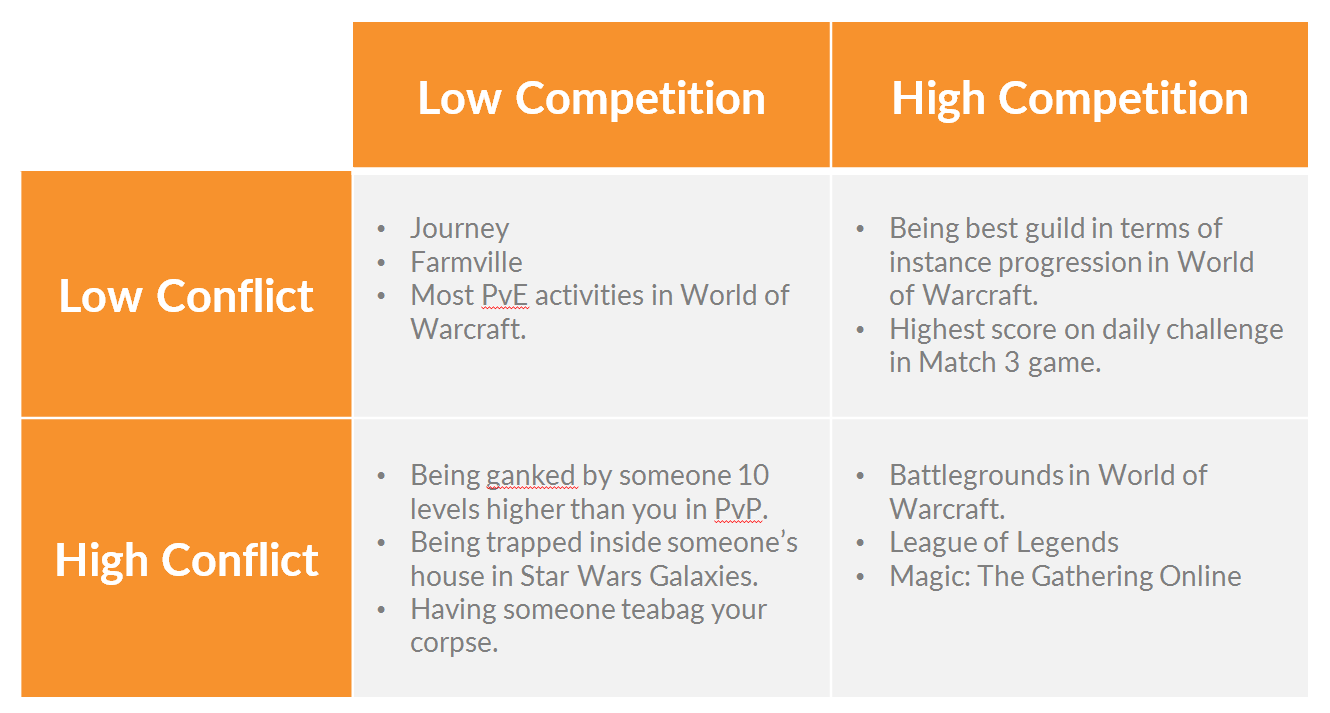 While we don’t measure Conflict directly in our video game data, we do measure both Social Fun (chatting, social interaction, having a good time together) and Conflict in our board game profile. There, Conflict and Social Fun are largely independent from each other (r = -.03) and in fact fall into different clusters entirely.

Together, the data suggests that conceptualizing Competition and Community as polar opposites is unproductive (and doesn’t reflect reality). More often than not, they are aligned and load onto a single Social factor. But when thinking or brainstorming about Social features in games, the important secondary motivation to take into account is Conflict, and whether the degree of Conflict introduced into a game aligns with the preferences of the target audience.

And of course, while the high-level findings serve as an interesting guide post, it’s most important to understand the motivations of your specific target audience.

The typical magnitudes of r vary from discipline to discipline. In the social sciences, a rule of thumb is that r = .10 is a small effect, r = .30 is a medium-sized effect, and r = .50 is a large effect.

Is This All Richard Bartle's Fault?

In his original paper, Richard mentions “competition”/”competitive” 5 times in relation to a player type. All 5 are brought up in the context of the Achiever. Richard never linked competition with anti-social behavior (i.e., the Killer type).

But this conflation emerged in the Bartle Test (which Richard did not create). For example, the following dichotomous question that pits the Killer against the Socializer conflates griefing with competition, as well as implying these two choices are polar opposites.

Which would you enjoy more?

This incorrect interpretation is repeated on Wikipedia, and in contemporary discussions of how Richard’s work applies to gamification (here and here).