It's an impossible task to give yourself -- to explain why something matters.  Other than things at the base of Maslow's hierarchy, there are very few things which matter to everyone.  Attempting to put videogames on this list is...ambitious.

You could even make the goal more modest; explain why videogames matter to everyone who has had experience with them.  Still too challenging.  It's too easy for people to glance off the surface of a thing with an audible "I don't get it." 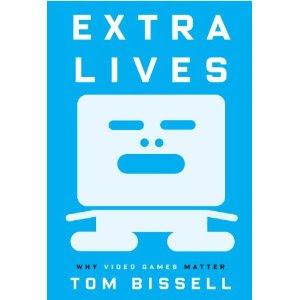 I really love this book.

I love the prose.  Here are a few random quotes:

"Shooters typically have nothing to say about evil and violence, other than that evil is evil and violence is violent.  This was never the most promising thematic carbon to trace, and yet shooters keep doing so with as little self-questioning as a medieval monk copying out scripture."

"Most games are about attacking a childlike world with an adult mind.  The GTA games are the opposite."

I love the personal stories Bissell shares with us, as an audience.  He relates stories about video-games that at various moment made him feel lonely, guilty, surprised, joyful, thoughtful, reminiscent, risible and depressed.  The final chapter, which tells the story of a co-incident cocaine problem and GTA IV problem, and how each fed the other, made me feel more sympathy for both classes of addicts.  It made me say, aloud, on a crowded bus, "This could happen to me.  This could happen to anybody."

Hell, I even love the goddamn chapter headings, which are pages designed to look like a menu screen with the following chapter highlighted as if selected.

The book is made up of nine mostly-independent chapters.  Most deal with a central game.  Some are interviews, some are essays, some are anecdotes.  All spend time dealing with a theme; diving deep enough to extract insight without sacrificing narrative or conceptual flow.  They read like dreams, driving with Cliff Blezinsky in his sports car and meeting Jonathan Blow in a diner, before waiting in an alley for your Russian drug dealer to return with the stuff.

What this book is NOT is "an impassioned defense of this assailed and misunderstood art form" (a quote from the inside of the dust jacket).  If this was meant to be a persuasive work about video-games worthiness for the label of 'capital-a Art' and the indespensible role it plays in modern society, then it has failed.  It does share with us 'why video games matter' to Tom Bissell, and to any of us who have already fallen in love with the form.

Bissel tries to summarize: "What have games given me?  Experiences.  Not surrogate experiences, but actual experiences, many of which are as important to me as my real memories."  I recommend reading this book, and thinking about this book, but not for an argument.  For an experience.