Bioshock Infinite: A level analysis from a gameplay point of view #5

This fifth part will cover Tears, Elizabeth's perception by the player and how her Tears behave compared to other resources and enemies
Mattia Beffa
Blogger
January 27, 2021

This is the following part of the analysis' fourth part, and, in case you are new, to the first part.
I recommend to take a look to the previous publications to fully understand how the game behaves.

Today we'll talk about Tears, how they behave compared to other resources and enemies, and Elizabeth's perception by the player.

Tears are one of the ways Elizabeth interacts with the player, providing available resources “on demand”. 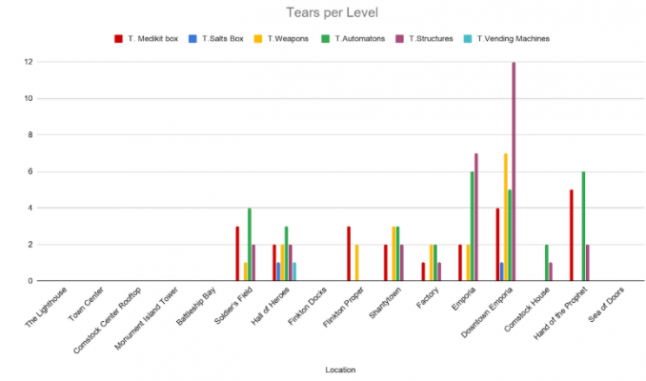 Tears are missing in the first areas as Elizabeth isn’t presented yet and, when just introduced, developers don’t want the player to perceive her as a mere resource provider.
Another empty area is Finkton Docks, as in the story the player and Elizabeth are apart. A similar thing happens at Comstock House.

Conclusion number twelve: NPCs’ utility helps bounding with the player, but to avoid their misperception high and lows are needed, sustained by story expedients.

For a higher variety, elements provided by tears are alternated and suited for the location. For example, Downtown Emporia has almost all kind of resources, as it is one of the areas with the highest difficulty and combat variety (ground, skyline, long-range, short-range, etc).

What about Meds and Salts?

Medikits are almost always present to provide sustain, but with a main difference with Salts:

Salts are less present since they have a higher base presence; Medikits, even though provided by the game, are findable in tears to create a bounding in the player between staying alive (medikits) and Elizabeth.

Vending Machines (Dollar Bill) are present in one location only, in the first half of the game area with the highest difficulty, for the same reason as above.

Conclusion number thirteen: A resource, but provided by an NPC, has a higher intrinsic value than the same resource provided by the game world, as well as simulating a human relation to support the socializer type. 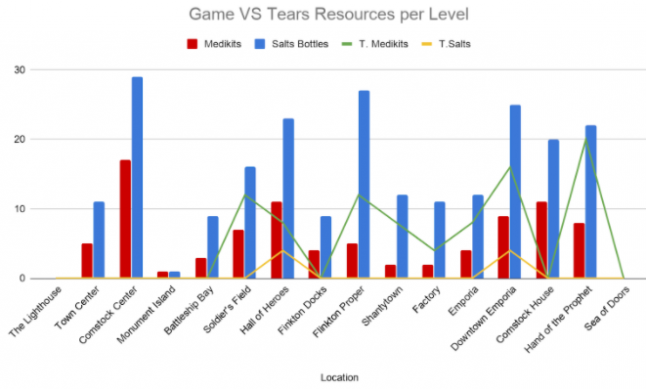 The resources provided by Elizabeth are lower than the game’s one, most likely to keep the player perception of her as a sustain figure, meaning that searching for Salts and Medikits is still a player’s task.
Beside, resources provided by Tears have a higher strategic value, as the player knows exactly where they will be (other than receiving a verbal warning from Elizabeth), while he has to look for the game’s one.

The Tears Medikits curve follows the game’s one with a few exceptions, especially Comstock House where, as mentioned previously, the player is drifter apart from Elizabeth. This absence is partially covered by the higher amount of Medikits provided by the game.

There is no area where Tears Salts are higher than the game’s one: Developers didn’t want the player to think of Elizabeth as a “walking vending machine”, as saying “she shouldn’t be your only source of supply”.
This is most likely one of the ways to maintain player’s perception of her as developers intended.

Having Medikits provided by Elizabeth and Salts provided by the game, the player reaches a deeper level of immersion, exploring and looting the world for one resource, and interacting with an NPC for the other one.

Conclusion number fourteen: The right balance between player interfacing with the world and NPC means a higher immersion in the game, and therefore a higher perception of the NPC itself. 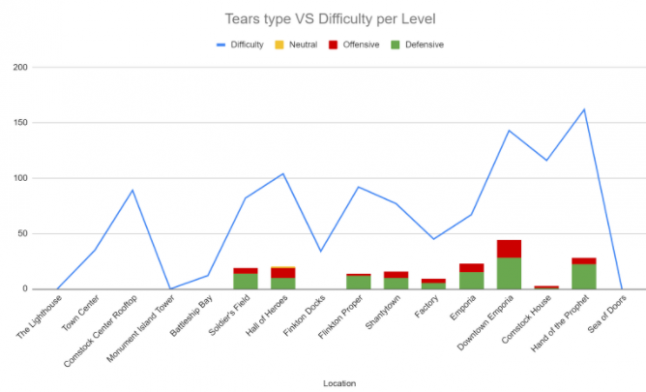 Defensive tears are always more present than offensive ones, for three main reasons:

Too many offensive tears may bring the player to activate the tear and let that entity fight for him.
In both cases he will be actively playing and facing up the challenges rising from his actions.

That's it for today! We're almost at the end of this series, I'm glad you followed it!

TL;DR: A resource provided by a NPC has a higher value, as it has a social component. It's important to find the right balance with the interactions between NPCs and game world; and last but not least, defensive structures provide opportunities to let the player be the active part of the game.

We talked a lot about Elizabeth's perception, about interactions between NPCs and world, and I thing Irrational Games found the right balance with her. What are your thoughts? Let me know!

I'll see you in three weeks, when we'll talk about side elements not covered so far: Collectables and Vending Machines, stay tuned!