Better Out Than In: Automating Syndication

Automating Syndication to all of the social networks.
Cathy Pyle
Blogger
February 15, 2010
When we first launched this site, we posted our first "Better Out Than In” entry discussing our new strategy for getting people to know about Neuron Games.  What we forgot to mention in that entry was the inspiration behind the design of the new website and the “Better Out Than In” strategy.

After having several different websites over the years, we found our previous site, though asthetically pleasing, the worst for traffic.  Too long to download (flash), too complex for the average surfer, and too much stuff, so we started looking for alternatives from other successful game companies.  That is when we came across the article “Building Buzz for Indie Games” by Paul Taylor on Gamasutra.  We had already started down the path of socializing our company with a facebook page and a twitter feed, but weren’t really pushing them much.  As a result of the Gamasutra article, we were heavily inspired by the people at Wolfire.  It was clear to us that our site would be greatly improved by a blog.  Thus we installed Wordpress and redesigned one of their themes to our own liking.

With a new blog oriented website up, and each person having a personal twitter feed, LinkedIn feed, and Plaxo feed,  we quickly learned that we needed a smooth syndication process to orchestrate them all.  It was quite annoying at first to post, copy, and paste from feed to feed and so on.  Actually, it was quite a nightmare at first.  So we looked for ways to automate this process.

The first thing we did was find a solution that allowed for the syndication of our personal feeds.  This would at least stop the copy, paste, and retweet madness of our personal statuses with regard to company feeds.  We accomplished this by using Ping.FM.  Ping allows for one post to be syndicated to tons of feeds like twitter, facebook, linkedIn… So this freed up lots of time on an individual basis.  However consolidating all these feeds into a stream suitable for the company fan sites and feeds was a different animal all together.

We wanted to feed the personal twitter feeds to the Neuron twitter as retweets.  This would allow people to follow one feed for all our tweets.  Unfortunately this wasn’t as simple as it sounds.  We finally found a video on YouTube that shows how to retweet tweets automatically using the RSS output of the twitter accounts.  You can use Yahoo Pipes and Twitter Feed to accomplish this.  The great thing about Yahoo pipes is you can feed as many twitter feeds in and get a singular RSS feed out.  Here is the video on YouTube on how to accomplish this with a single feed.  There is a module for combining the feeds into a singular pipe.  For a single twitter feed you will end up with something like this for an output pipe.  Notice the regular expression module that takes care of the retweet prefix and the filter to stop re-retweets.  Re-retweeting is just too retarded to deal with :) 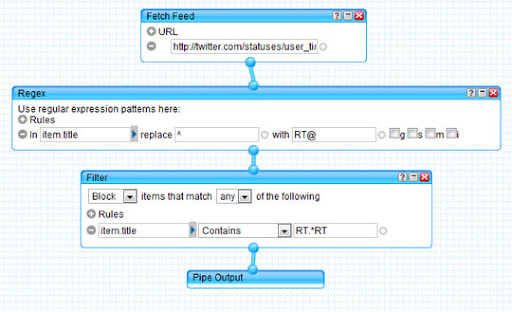 We also wanted to syndicate our blog, so we fed the RSS feed from the Wordpress blog into Google Feedburner.  By feeding twitter feeds from the RSS of Feedburner and Yahoo Pipes, we are then able to combine all the personal feeds, and the blog feed into the company facebook page, and company twitter feed automatically.

The only problem we currently have is the bastard child MySpace which seems to be the only social network that is clueless about RSS or any form of syndication from twitter, facebook, blogs..you name it.  It has been our experience that MySpace doesn’t get anywhere near the views of the others either.  This leads us to wonder if it is worth the effort for them.  Currently to facilitate this lack of support we have to use Ping.fm for the personal tweets, and Share-this to manually prime from the blog.  It is just one click, but still.

That being said, it is possible to mostly automate your companies social output using the methods mentioned above.  We have saved ourselves tons of time by doing this, which means more time for game development.  So I hope someone can learn from this, and if you know of “simple” way to feed MySpace, drop us a line :)  We have only had this process in place for little more than a month, but it is paying off in spades.

This is a mile high over view of our syndication beast. 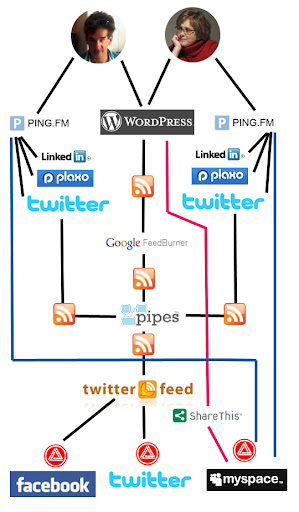