The owner of the Atari History Museum has released versions of Atari documents from the late 1980s showing sales of Atari's ill-fated Atari 7800 console.
Matt Matthews
Blogger
May 26, 2009

Curt Vendel is known in the classic videogame scene as the owner of the Atari History Museum and designer of the Flashback consoles (essentially clones of the Atari 2600, designed without cartridges for modern consumers). A couple of days ago he released some Atari documents he had on sales of Atari's third major console, the Atari 7800.

I put them together and made a graph so we could more easily see how the hardware sold. Keep in mind: these appear to be shipments to retailers, not units sold through to consumers. Moreover, not all units went to retailers, so some might have been for reviews or other media coverage. 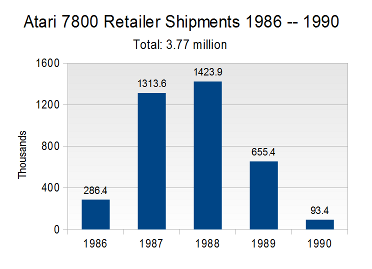 The surprising figure here is the total of 3.77 million hardware units. I believe previous estimates of Atari 7800 hardware sales were much lower.

The documents released also show that fewer than 152,000 units were returned to Atari.

There are some oddities in the data that I don't fully understand. When one takes the total revenue Atari made on these hardware sales and divides by the total number of hardware units, the average per unit comes out around $22. That's an astonishingly low figure.

The original price apparently was $140, but it isn't clear to me whether that was the 1984 price (when the hardware was first market-tested) or the 1986 price. Even at $100 per system, which would have been remarkably inexpensive, the retailer margin would have been huge.

There are several possibilities. Perhaps Atari was offering the hardware at such a low price because retailers had been burned by Atari in the mid-1980s when the market had fallen apart. When Nintendo and the NES rebuilt the market, perhaps the competition was so fierce that Atari had no choice but to offer the hardware at such a low rate. Or, perhaps these figures don't represent what we think they do.

Regardless, it is remarkable that Atari had revenue of $97 million over five years just from the hardware of this apparent failed system.

(Thanks to A Black Falcon for posting about this on NeoGAF, which is where I originally saw news of the data drop.)