SEARCH
A minimum of 3 characters are required to be typed in the search bar in order to perform a search.
DISCIPLINES
5 MIN READ
Blogs

A brief background and random thoughts from an introvert who has left a stable full-time job to follow the indie game dev dream!
Doug Day
Blogger
April 30, 2015

I’ve been a reader of Gamasutra for a long time now but this is my first blog. In fact, this is my first blog ever! Writing one requires a certain self-belief that there are people out there who actually want to know what you think. It also requires the blogger to have a certain amount of extrovert in them. It’s probably not true to say I have absolutely none of either but it’s certainly taking me out of my comfort zone – putting yourself out there at risk of being shot down is a big thing. Which brings me to my first problem – going indie when you’re an introvert!

I’ve dreamed of going indie pretty much since I started programming on an Amstrad CPC 464. I’ve actually tried a couple of times before but this is the first time I’ve been so organised! Dog Day Games Ltd. was incorporated on 18th April 2015 in the UK and this is a random selection of thoughts about how I got here.

The final logo as designed by Shahid Abbas (www.shahidabbas.com)

My experience in the games industry started after graduation in 1998 and I was incredibly excited to finally make it and live my dream. The excitement didn’t last long. What followed was about 6 years of working at companies with great people but lots of incredibly tight deadlines, late nights, money struggles and, to be honest, various people, as nice as they were, in positions they probably shouldn’t have been in – certainly not without some degree of management training. Despite the last games company I worked for being pretty good, the years had already taken their toll, and with suffering depression anyway, it all came to a head in March 2004. What followed was a strange mix of time out and random part time jobs teaching computer skills, trying to improve myself and releasing a few iOS games along the way – which actually went pretty well despite not being very proud of them but at least paying off the expense of the MacBook Pro and iPod Touch!

In June 2010, I was lucky enough to find myself working full-time again – this time for a very successful semiconductor IP company. I was almost living the dream again – not making games but pretty close - making graphics demos, often with some game content. I owe a lot to that company and the really great people that I worked with. It got me back on my feet and financially stable, probably for the first time in my life!

BUT… the dream never goes away – the itch has to be scratched! 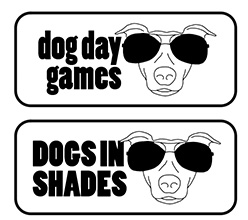 My attempt at prototyping a company logo (before the name was decided.) – and yes, I’ve heard it looked too much like a pig :)

My last company allows staff to take 4-week sabbaticals. I took mine in September 2014 and used the time to prototype a game idea – I definitely recommend doing this before taking the plunge, simply to give yourself the confidence that the idea is a good one.

Unfortunately, I didn’t realise there was already a game out there with similar mechanics! In January a friend introduced me to a great little game called Unmechanical. Though very different in style, atmosphere and objectives to my own game, the core mechanic is unmistakeably similar. Luckily I had attended a talk at Pocket Gamer Connects by Rami Ismail of Vlambeer. Rami talked about making an opportunity out of the worst situations, which in Vlambeer’s case was being cloned before their own release. It was an inspiring talk and I am determined to follow by example and use this as positive motivation and take my game in it’s own direction.

So, I have an idea I think is a good one but I haven’t created a game for a while and it’s been even longer since I went through the approvals process to get things published – let alone dealt with the issues of self-marketing or whether to be free to play or premium. I think the days of guaranteed sales (which I was lucky enough to see the tail of last time I released a game for iOS) are over. My plan is to release some smaller games first to get back into it and learn the ropes again; I’ll let you know how that works out!

I think I was procrastinating for about a year before I finally took the plunge to go indie. During that time I read lots of articles from other developers in the same situation. I feel I have benefitted from others’ experience – both good and bad. It’s important that a decision like this is made with as many facts as possible and a realistic expectation of what any potential income might be. My intention is to follow this blog with regular updates about my experience, failures and, hopefully, successes too. Hopefully this will help others who are considering going indie but also I think it’s a great way of getting out there, joining the community and getting your company and games known.

As for going indie as an introvert, to be honest, I haven’t really solved that one. Being a one-man-band forces you to take on many different roles, often a long way from your comfort zone. I guess this blog is my first step to overcoming that.

Thanks for reading and good luck to you all, regardless of your endeavours.