Wobble Garden takes the natural pleasure of flicking a door stopper and builds it into a relaxing game of exploration, lights, and sounds.
Kris Graft
Publisher
February 21, 2018

Wobble Garden takes the natural pleasure of flicking a door stopper and builds it into a relaxing game of exploration, lights, and sounds. The mixture of color, tactile feedback, and the ambient sounds that come from the player's interactions with this electric garden draw the player into a peaceful place, one built upon that joy of playing with a door stopper.

Gamasutra spoke with Robin Baumgarten, developer of Wobble Garden, to talk about the developer's use of door stoppers in their work, creating gameplay out of the them, and why they create the controller first and the play second.

I'm Robin Baumgarten, and I designed, built and programed Wobble Garden from scratch. 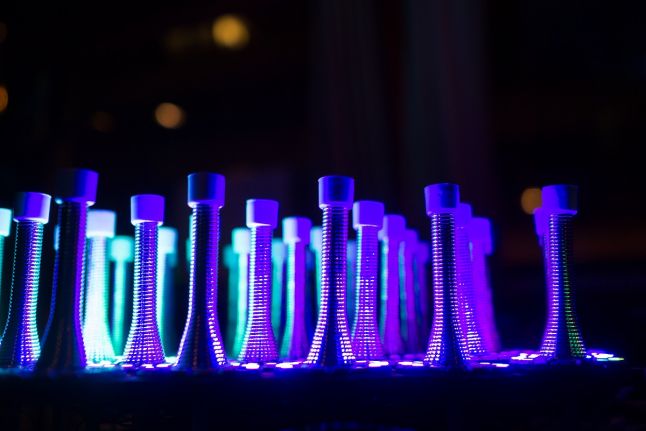 Wobble Garden is an experimental hardware game that invites you to explore a mysterious LED spring garden by touching and wobbling an arrangement of sensing springs, tending and befriending little electric beings that live between the springs and emit strange sounds and light bursts. The springs are arranged in a hexagon pattern with an LED ring surrounding each spring, creating a unique visual and tactile experience that I've built to be eventually scale-able to a several meter large installation.

I studied computer science and looked at AI and player behavior modeling for a while, then I started making mobile games and got interested in hardware as a hobby a while later. With the success of Line Wobbler, a one-dimensional dungeon crawler that I made around 3 years ago and also showed at ALT.CTRL.GDC and which won prizes at A MAZE Berlin, Indiecade, and the Tokyo Game Show, I am now working on hardware games full time.

What development tools did you use to build Wobble Garden?

The hardware side is controlled by two Teensy 3.2 Arduinos which are programed in a variant of the C programming language. The Teensys are quite fast (for Arduinos) and allow an LED refresh-rate of over 150 fps, which enables me to code very smooth effects. The Arduinos are connected via USB to a computer running a Python environment that controls the game logic and is responsible for sound effects.

The springs I'm using are just plain door stopper springs that are mounted on a laser-cut board. Inside each spring, I suspend a vibration sensor (which in itself is a spring inside a metal cylinder, closing the contact when you shake it), which is hooked up to a multiplexer. A multiplexer is a little chip that reduces the connections that I need, so I could easily connect hundreds of springs to each Arduino. Finally, there's an individually addressable LED ring around each spring. I'm using Neopixel LEDs, which are the most common type of LED. 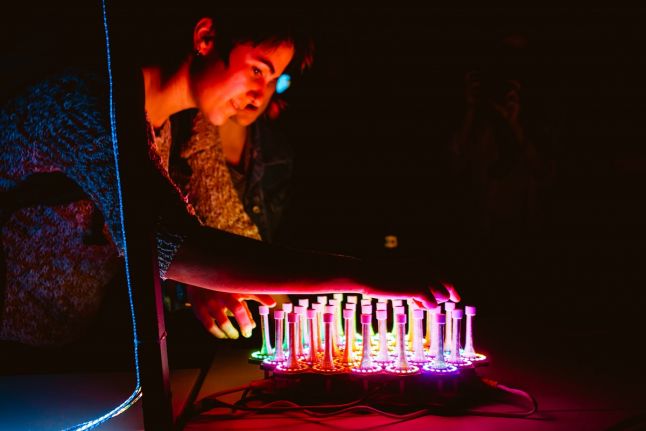 I started working on the game in October last year, so it's a fairly early prototype right now. I'm still actively developing the game mechanics for the interactions, and will probably make another hardware iteration before ALT.CTRL, which would enable touch-sensitivity.

The concept is a bit of a spiritual successor of Line Wobbler, which also uses a spring and LEDs as key ingredients. In my hardware experiments, hardware often comes first, with the actual game mechanics built on top of the physical characteristics of the used sensors and components. That's also the case here, so I built the first prototypes without fully fleshed out game mechanics. Gameplay prototyping and early playtesting led me to a game with more laid-back and ambient mechanics compared to the action-heavy Line Wobbler.

What do you feel draws people to those door stoppers? Why must we just flick them?

Good question! I think it's a deeply rooted desire to feel a strong feedback to our actions. Flick a spring, and it wobbles - giving instant visual, audio, and force feedback. This is irresistible even to animals, which a short YouTube search will confirm. 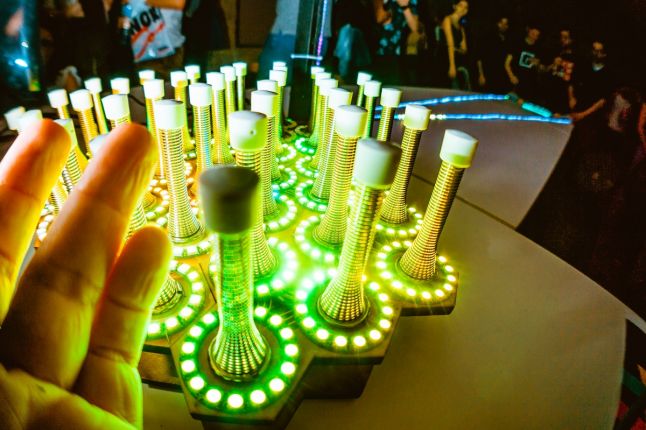 How did you incorporate door stoppers into a game? What kind of play did you feel would suit that great feeling of flicking them?

There's quite a range of actions possible with a spring: bending it, flicking it, shaking it, touching and letting go. With Line Wobbler, I explored interacting with a single spring, which led to a very precise, minimal action game. In Wobble Garden, there are a lot of springs, but each of them not quite as precise and not directional. This leads towards a slower and a more unguided experience, where players can flick and touch springs as they please, with a range of different visual and audio responses. Together with the bright LED colours, this leads to a more peaceful, ambient experience.

What drew you to add light and color to the controller?

Part of the reason why I make experimental controllers is to push away from common user interfaces, which includes the display. After many successful experiments with individually-addressable LEDs, I came to value their colour brilliance and their physical versatility - I'm not restricted to a normal rectangular grid, but can experiment with long strips or rings. It also allows me to forego a computer screen entirely and don't treat the controller as a periphery, but as a full hardware game with in- and output.

The first prototype of Wobble Garden re-used LED strips that I had lying around, and I really liked how the LEDs reflect in the metal coils of the springs. To emphasize this effect, and to break up the boring square grid pattern, I decided to use LED rings, modifying the layout to a nice and dense hexagon pattern.

There are two competing aspects at work here: making interfaces as seamless as possible, like in touchscreens and keyboards, versus making playful and active controllers - such as game periphery and toys. Current trends, such as AR and VR, will be pushing the development of devices that act precisely in 3D space, where I also hope to see more force-feedback enabled devices (and games!). Nintendo is experimenting as always, and we will see if Labo can bring the idea of making your own weird controller to younger minds! Niches such as experimental hardware games (hopefully!) continue to grow and expand into new arcades, festivals, and weird playful experiences, such as escape rooms and video game bars.