Play a game of mini golf without a putter, using your breath and a rotating screen to guide the ball with Windgolf.
Alex Wawro
Blogger
February 02, 2018

Windgolf offers players a relaxing round of mini golf, only instead of using a putter, they'll be blowing on the ball. By breathing into two different tubes and rotating a screen to get a better orientation on the ball, they'll be able to slowly guide the ball to the hole. Not that taking their eyes off the ball to blow it in the right direction makes that easy.

With this new take on minigolf being playable at GDC's Alt.Ctrl.GDC exhibit, Gamasutra reached out to developer Pepijn Willekens to learn about the creation of this wind-based golf game, and some of the challenges that came up using such an imprecise input like breath.

I'm Pepijn Willekens (@PepijnWillekens). I developed all parts of Windgolf. I did the programming, electronics, 3D, gamedesign, etc. I did get some carpentry help from Thomas Devillé though (Who runs a business building custom made wooden arcade cabinets called Devillé Arcade).

In Windgolf, you play minigolf, but instead of having a club, you control the wind by blowing into the machine, which creates wind in the game. You are like a god of nature that only cares about getting a ball into a hole :D

I am currently in my graduation year of a Bachelor in Multimedia Technology. Over the past years I became more involved in the Belgian game industry. I co-organised an international indie game festival called Screenshake 2017, co-organised a Global Game Jam location for 3 years, and co-organised monthly game developer meetups for the past 1.5 years. I haven't released any commercial games yet, but I'm currently (also) working on a mobile puzzle game called Boa Bonanza.

What development tools did you use to build Windgolf?

Windgolf uses Arduino for the sensors, which sends this data to Unity over USB.

The arcade is build out of wood. For the blow sensors, I used 2 small speakers that I use as if they were microphones. So, you actually blow directly on the speakers' membrane which creates a tiny electrical signal. I amplify this so the Arduino can read it.

For the rotation, I currently use a rotary encoder, but I am planning to change this into a gyroscope or accelerometer. I am also looking into taking some parts from a watercooker to be able to power the upper rotating part of the arcade. The game itself runs on a laptop with an external screen. 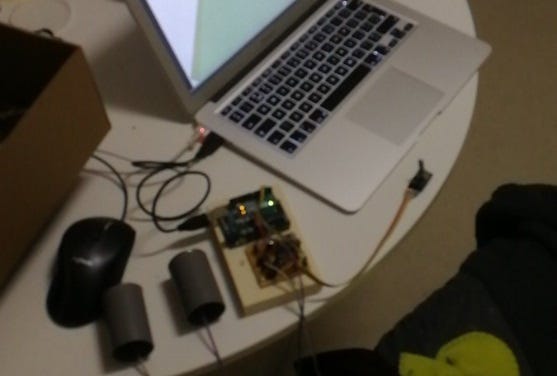 I estimate that the prototype that is visible in the video is made in approximately 12 days, spread out of 2.5 months. The game will have progressed a lot by the time I show it in the GDC expo, though.

What difficulties did you face in combining blowing and a moving screen to create challenging puzzles?

Windgolf is a rather clumsy game to play, because rotating around is quite a physical effort compared to other games where you look around by moving your mouse or joystick. The players reflexes are much slower. You have to look away from the screen to blow, after which you realize that the ball wil roll just next to the hole, and you have to get to the other side of it in time. The game is aimed for an expo context, so people are free to try to control the arcade in a combined effort :D 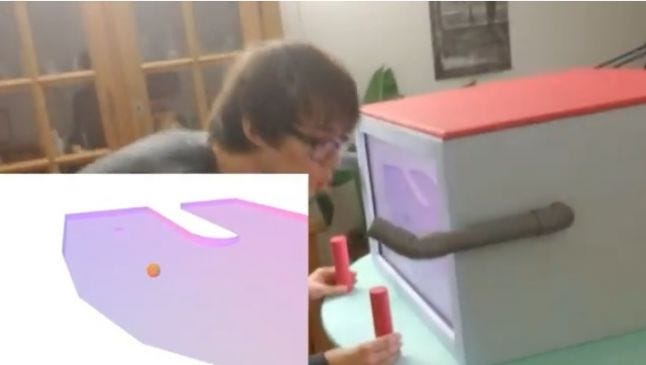 Windgolf allows players to change their perspective by moving the screen as well. What drew you to add this element on top of blowing on the ball?

I imagine the arcade as a sort of window into another world. If you would want to blow a ball in real life in one direction, and after that in another, you would also have to move around the ball to position yourself first.

Was harnessing breath a difficult thing to do as a gameplay mechanic? How did you get it just right?

Blowing isn't the most precise input method, but in Windgolf, your precision in rotation is more important than how hard you blow. So, it's more a matter of giving player a clear sense of what is happening.

I think that haptic feedback in controllers will be given much more attention. Nothing is as satisfying as moving your finger over the pads of Vive/Steam controllers, or feeling the virtual balls roll in your Nintendo switch controllers (in 1-2-Switch). Game developers have been mastering the art of wobbling and squeezing characters, shaking screens, and all sorts of audio-visual feedback, but being to decide what the player feels when they make their his input to a game allows for a direct way of teaching your player how they interact with it. It allows for more experimentation through standard interfaces. Imagine that the touchscreens of future phones would offer the same feedback of the Vive/Steam controller pads.