Striker Air Hockey makes use of a table sized-touch screen to do things no other air hockey game could do, creating unique effects and changing up how the game works on the fly.
Kris Graft
Publisher
February 16, 2018

Striker Air Hockey makes use of a table sized-touch screen to do things no other air hockey game could do, creating unique effects and changing up how the game works on the fly.

Gamasutra spoke with Gabe Miller of Guerrilla Nouveau, developers of Striker Air Hockey, to learn about how they created a touch screen that large, what difficulties they ran into while doing it, and what they hope to do to change how air hockey is played using its connection with this tech. 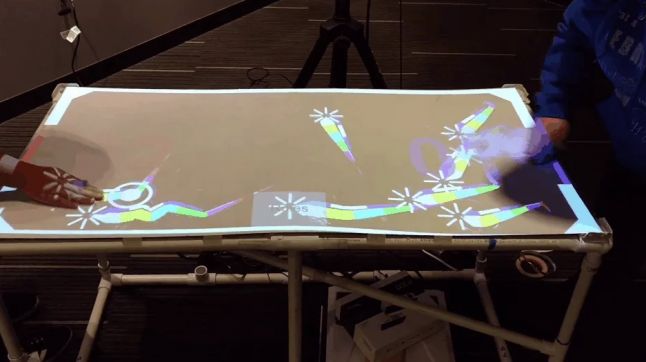 It’s not just a single controller, but a technique that can be used to turn any surface into a cheap, large-scale touch grid.

Like the rest of our team, I’m a student at DigiPen Institute of Technology, and I’ve been developing games as a programmer and designer for the past 3 years.

What development tools did you use to build Striker Air Hockey?

Our most important tools are Arduino and Unity. Arduino provided us with a quick, user-friendly interface to develop our hardware, and Arduino’s Unity integration allowed us to interface with the hardware in a way that was easier to understand as game developers.

Copper tape is the most important element, as it’s what we use to detect touch. Our touch table is built out of wood, but you could use any wall or other rigid surface to make a controller similar to this. 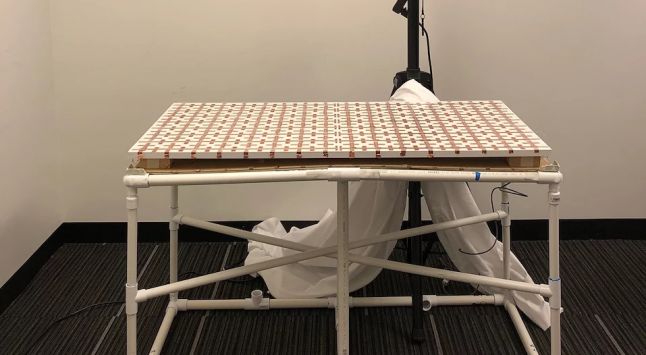 We got our initial prototype for the gameplay running in under a week. Since then, we’ve spent the last two months polishing the gameplay and adding new and engaging features. Developing the hardware has taken up the bulk of our development time, as this controller evolved from other hardware projects that were in development since this time last year.

Our previous projects had fixed button locations which were very limited in terms of input. We saw users trying to perform many familiar touch screen gestures, such as swipes, which our hardware could not support. We came up with the touch grid to increase the flexibility of the hardware and to support common gestures.

What challenges did you face in creating tech that would let you (affordably) turn any surface into a touch screen?

Because none of us come from an electrical engineering background, we had to rediscover things which may have been familiar to experienced engineers. At one point, we thought we had everything figured out when it came to making a touch grid. However, our prototypes were at a smaller scale than our final board was intended to be. When we started building larger prototypes, we found that our current techniques wouldn’t work on the full-scale board. Finding a fix to this issue set us two weeks behind on development.

Another fun side effect of not being electrical engineers is that most of us had no idea how to solder. Our sound designer ended up being the one spending the most hours connecting and wiring all of our components together. 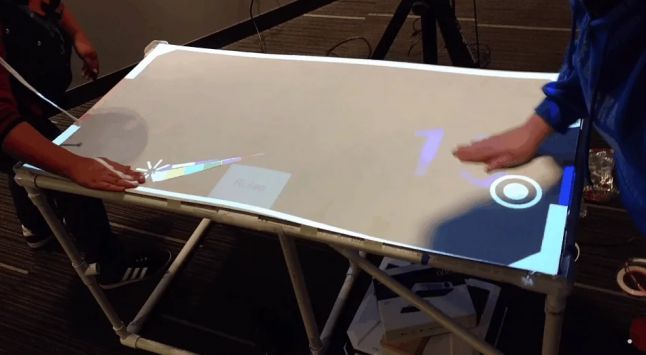 How did you want to make use of your innovative touch interface to add some new elements to air hockey?

Unlike a physical game of air hockey, Striker Air Hockey is not limited by physical constraints, We can quickly change the state and physics of the board and the pucks. We’ve also been developing new game modes that have never been done in air hockey before.

How will Striker Air Hockey continue to evolve in the future? Your touch interface tech?

In addition to adding new types of gameplay, we’d also like to add some visual flair to our game that wouldn’t be practical on physical air hockey tables. We are currently developing a colorful display mode where the puck leaves a multicolored trail of paint behind it and a sports-style replay cam that shows dynamic angles of the puck when a goal is scored.

For our hardware, we’d like it to be a platform for other interesting games. We’re already working on some very experimental prototypes on this hardware. Furthermore, we are writing a straightforward tutorial on how to build a touch table similarly to ours, and we plan on developing an API for our touch grid to be more accessible. Hopefully in the future our touch table design can become a resource for other developers looking to build large-scale touch screen games on a budget.

I think that we’re going to see VR dramatically increase in popularity and possibly become an industry standard within the next five years, but I don’t think we’re going to see traditional controllers go away as one of the main forms of input even in the next ten years. I believe we’re going to see touch screen inputs persist, at least in the mobile market, but with touch screens becoming more common on laptop computers, we may see another surge with touch screen technology in the core gaming market as well. I think AR will be the most interesting technology to watch. It shows the most promise for truly unique gameplay experiences that we’ve never seen before. However, arguably the biggest hurdle for AR is the requirement to exist in real world spaces, making it potentially the least accessible of these technologies.