Pump the Frog uses a bicycle air pump to inflate or deflate a frog, as well as manipulate objects in the environment through spinning, in order to help the amphibian find food and get around.
Kris Graft
Publisher
February 19, 2018

Pump the Frog uses a bicycle air pump to inflate or deflate a frog, as well as manipulate objects in the environment through spinning, in order to help the amphibian find food and get around.

Gamasutra spoke with 7 Holy Frogges, developers of Pump the Frog, about how they designed their froggy adventure around the capabilities of a bike pump, as well as how they turned the pump into a viable controller. 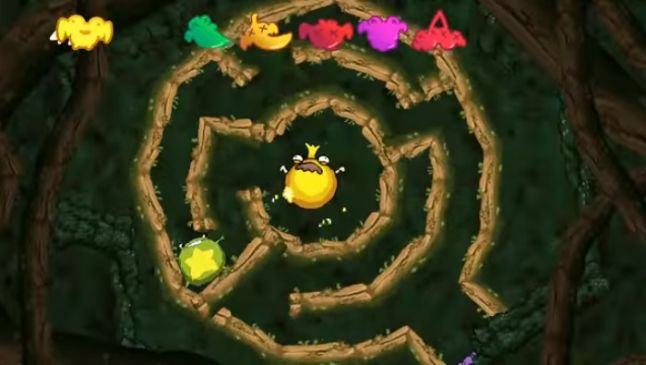 Our controller is a re-purposed bicycle-pump! You use it as a lever to control the size of the frog, our main character, and objects and creatures in the environment. When the handle is pushed down, the frog gets pumped up with air, and when you drag it up again the air is sucked out - the frog becomes small! You can also spin the pump!

The pump is fitted with a mouse sensor that reads the pump shaft as it moves up and down and is twisted - this is translated into values that change the frog and other objects!

Wahlström: I never made any proper video-games until I started studying at Campus Gotland. However, I have been drawing all my life, and for around 5 years with the explicit goal to work with games at some point in my future. So far here on campus, I have been a part of two larger projects, both in groups including Erik (Säll), one of them was our first university project - a side-scrolling underwater-exploring game (Below the Abyss), and the other is Pump the Frog. Add a couple of game-jams to that and my short background in game-making is summarized.

Säll: I started making games in a visual scripting language called scratch (scratch.mit.edu) when I was 13 or so. I had a little game series called ninja roy which people seemed to go crazy over (lol). I also made some small unreleased XNA games. Since I started studying game design at Gotland, I've gotten to make some cool games together with people, which of course is a major difference in scope compared to working alone. I'd also like to actually release a game some time in the future.

Osana: I started making card games as a hobby during my early years, and later learned the Unreal blueprint scripting language. Since I started studying game design at Gotland Campus, I have learned both C# and C++, which gave me the tools and understanding of code structure and how to create games in a team. Throughout my time in the university i have been working on 5 different games and gained priceless practical experience in both game design and coding.

What development tools did you use to build Pump the Frog?

The game is made from scratch in Unity, except for the plug-in “Ferr2d”, which is used to loop textures on the terrain-objects. Textures and animations were made using Photoshop and Clip Studio Paint, respectively.

Pump the Frog’s input is actually only made with two components, We bought an ordinary bicycle pump and a computer-mouse and then simply attached the mouse to the pump. 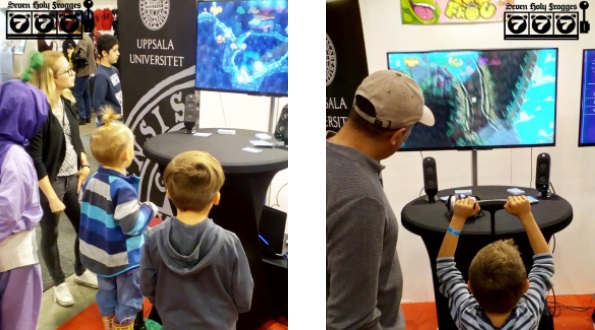 The game  was made during an 8 week project at the end of spring 2017 at Uppsala University Campus Gotland, but we continued to work on it sporadically during the autumn of 2017 and are now getting the production going properly in 2018.

We had several brainstorm sessions and came up with many ideas and different inputs. One of the input ideas was to use a pump, and when thinking about what you can do with a pump, we came up with the idea of controlling a ball that is rolling down a hill with it. Someone then hatched the obvious idea of making the ball into an inflatable animal, the natural conclusion was, of course, to make the animal a frog. As the idea and aesthetics were pinpointed, more features were added, and here we are!

What challenges did you face in turning a pump into a controller?

Not that many; when we figured out that we can use a mouse sensor to read the pump shaft, construction was really straight forward. We had many ideas on how to read the data from a pump, including microphones and strings, but a mouse was the easiest way to solve the problem. The challenges we faced with the mouse was to make it read the x angle straight and make it stay there during days of pumping, since if the mouse moves - the laser cant read the pump shaft properly.

What thoughts went into designing gameplay interactions around what people can do with an air pump?

You use a pump to inflate things in real life, so we went with the same philosophy while designing the challenges. Also, since air is light, the game and challenges are often about floating. For instance, The Frog has two extremes on the inflate-deflate scale. One is when you are fully inflated, which makes you float on air streams and bounce around more. The other is when the frog is completely deflated, which makes him more dense and heavy. 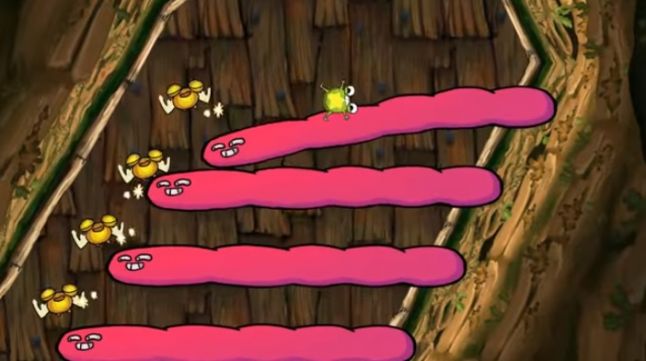 How did you design challenges around what the pump allows players to do? How did its capabilities affect stages you made?

The pump only allows 4 different inputs: up, down, spin left and spin right. With this in mind, we had to adapt and design our challenges accordingly. At first, we only thought about using it for inflating and deflating, but we added things in the environment that turn on and of f or move around, and later on added challenges that involve spinning the pump.

The limitations of the pump as to the amount of control we could give the player made designing obstacles around that ,and still maintaining variation in gameplay, our biggest challenge.

What does having an air pump for a controller teach the player before they've even started to play Pump the Frog?

A pump tends to be used to fill things with air, so that the game involves pumping and that the game has something to do with air should be quite clear from the start. The player can also assume that the game will not be too complicated, since the input is so simple and easy to understand.

Wallsten:They will not change that much in 5 to ten years, I believe,.