PlÃ¼nge will have players putting their toilet-plunging skills to work, playing through multiplayer minigames that require they plunge as fast and hard as possible with some real plungers.
Alissa McAloon
Editor-in-Chief
January 11, 2019

Plünge will have players putting their toilet-plunging skills to work, playing through multiplayer minigames that require they plunge as fast and hard as possible with some real plungers.

Gamasutra had a talk with Sebastian Scaini, lead designer and programmer for Plünge, as well as the rest of the development team, to talk about the inherent silliness of plunger controllers, and how they designed their games around the taxing act of plunging.

The draw of the plunge

Scaini: The controller functions the same as a traditional household toilet plunger. You can make a plunging motion by pressing down on the plunger in order to interface with the games. It’s easy to pick up and play for anyone unfortunate enough to have unclogged a toilet before.

The simplicity of Plünge makes the game a lot easier to pick up and play without instruction. Players see a plunger and naturally understand what to do to play the game. Because the only input the game takes is the plunging motion, players don’t need to think as much, letting them enjoy the play experience.

Plunging is funny, at least to me and the rest of the team. Sure it’s an unsavory task when applied to real life, but the act and motions of plunging can be quite comical. So we thought, “Hey, why not make it into a controller?” Some people have called our controller crappy, but I say they need to unclog their minds and open them to the possibilities of the Plünge controller. 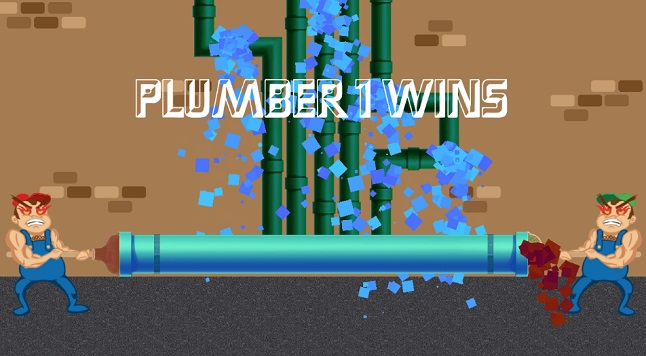 Challenges of playing with plungers

Scaini: One button design is something difficult but interesting to design around. Keeping the limited interaction entertaining and fresh was key to making Plünge the interesting experience that it is. We quickly realized that with just one button we wouldn’t be able to make one big or long game, so we opted to make many small and short ones that could be played easily in short sessions. Coming up with these games, we designed 12 that we thought might be fun and then I quickly prototyped them all. We cut down all the ones that weren’t fun to play as greyboxes and carried on making the ones we did like.

There are actually a couple of minigames that didn’t make the original cut that we’ve since reworked and will be patching into the game in time for the Alt.Ctrl.GDC showcase. 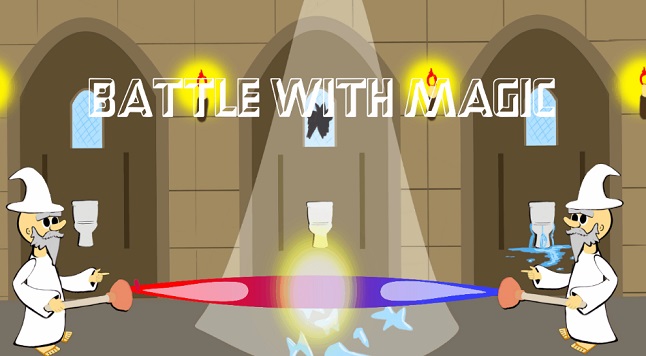 Scaini: The controller itself is fairly simply built and this simplicity allows it to stay durable even under heavy use. That said, the aggressive movements required to use the controller definitely tires people out quickly, which is why we made the games short and easy to walk away from. The quick pick-up-and-play style sessions allow people passing by to jump in for a round or two and then leave without missing any of the action. This aspect also makes it perfect as an installation game, as it shows really well in crowded settings.

Silliness is better with a friend

Scaini: Plünge benefits greatly from the silliness of its gameplay and themes, and in order to make that even stronger, we opted to make it multiplayer. We took extra time to construct two Plünge controllers specifically because it’s a lot more fun to share the silly experience with a friend (or complete stranger). The multiplayer dynamic makes Plünge a lot goofier, and almost always leaves players laughing as they try to plunge better than their opponent.

The Plünge controller takes a simple one button concept and elevates it with the atmosphere it creates in the room. It’s a social experience meant to make players feel silly and tired while also being entertaining in short bursts. The controller keeps the activity of pressing a single button fresh, and the competitive nature of the minigames engages the players in a way no single player plunging experience ever could.

On how they created a plunger-controller game

Scaini: We used Unity to make the digital games for Plünge. For art, the team used Photoshop and Maya and we did sound implementation in FMOD.

Lanaus: The materials that were used in the construction were: oak for the main base, a maple top to add a nicer finish, and rubber feet to allow the controller to safely rest on the table. The inside was made with about 1.5 feet for cable to connect the base contact pad to the Makey Makey. Inside the plunger, a spring was soldered to an alligator clip and glued into the handle to allow for a flexible and durable contact end to complete a circuit and activate the button. 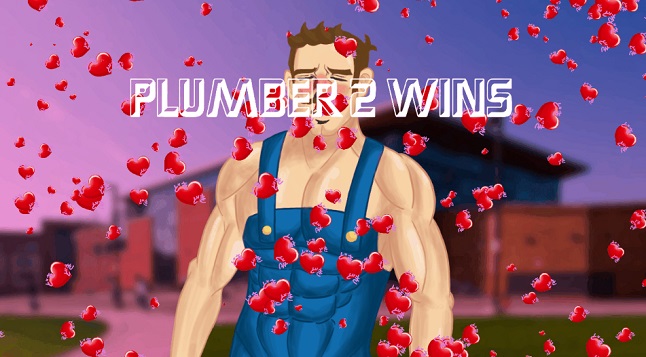 The people behind the plungers

Feniquito: My name is Darryl Feniquito, and my main role was designing 2D and 3D assets for our game, Plünge. Most of my work you will see in the “Wizards” minigame mode. I also contributed in managing a small section of the project.

I am currently a second-year game design student attending Sheridan College. My main focus and passion is character design. My favorite part of making games is going through the process of creating something to be implemented into the final game and seeing people enjoy what I’ve worked hard on. It’s a good feeling to know that I was a part of something that makes someone happy. Plünge is the first game that I’ve been a part of that has been accepted into GDC.

Nelson: My name is Gavin Nelson, and I helped with both controller design and all art assets for the “Draw” minigame.

Making games is something that is pretty new to me. I started about a year and a half ago when I started building a Dungeons & Dragons campaign for some of my friends. After seeing them interact with what I had created, I decided I wanted to start creating games. Plünge is the first digital game that I have been part of, but since then I have made a 3-5 player strategy/war board game and a single player bullet hell game where you get to protect the world from hordes of demons. My favorite part of making games is coming up with interesting mechanics and seeing how they interact together.

Lanaus: I’m Jackson Lanaus. I was the main controller builder for this project.

Scaini: I’m Sebastian Scaini. I was the lead designer and programmer on the game.

I’ve been making games since I was a kid. I’ve had the opportunity to work on a couple of commercial projects at Sinking Ship Interactive, and have since started making a small name for myself making weird freeware games online. I’ve released over 80 small games in the last couple of years and have no intention of slowing down! You’ll often see my work submitted to jams like Ludum Dare and Alakajam, so be sure to keep an eye out for what I’m making!

Solujic: My name is Vuk Solujic, and I was tasked in drawing some of the assets for some of the Plünge minigames.

I had a dream of designing video games when I was fourteen and started exploring some well-known programs used to make games, including Maya, Adobe Photoshop, and the Unity game engine. I touched more on Photoshop and other drawing programs, and found myself more versatile in the game art and design game department. However, I want to make another attempt in Maya and Unity to become a more versatile designer. I'm only a first-year student, so I still have a lot of time and work to put into.

Zhang: My name is Xin Zhang, but most people just call me 'Shin' or sometimes 'Shane'. My role on Plünge was primarily as a creative designer and asset creator.

I’m a first-year student in Sheridan College's Bachelor of Game Design program, but ever since I was little, I loved to make games to play with others. For now, I have skills in asset development (2D assets, 3D modeling, rigging/animation), and conceptual design skills. However, I still believe I’m far from being able to stand toe-to-toe in the professional industry, but I hope I will be able to polish and make my skills shine before graduation. I have big aspirations to become a project lead or a game’s director, as I love to understand how everything works and dabble in a bit of everything. When all the parts of a game come together and work in harmony, to me, that is true art.