Machinaria is a device that lets players manipulate the emotions of the audience through how they present the news, exploring media's use of similar methods.
Alissa McAloon
Editor-in-Chief
February 06, 2019

Machinaria is a device that lets players manipulate the emotions of the audience through how they present the news, exploring media's use of similar methods.

Gamasutra spoke with Giovanny Beltrán, director of Machinaria, to talk about why they wanted to explore how the media plays with viewers' emotions through how the news is presented, how they use their unique controller to make the player personally explore those moral dilemmas, and the importance of thinking on the news and information we are presented within our lives.

I'm Giovanny Beltrán and I'm the lead programmer and the director of this project.

We are a group of friends with different skills. We really enjoy participating in game jams as a way to experiment with different mechanics and test our craft. For three years, we’ve been running a YouTube channel about different aspects of game design and development in Spanish. We do interviews, talks, and games analysis. Regarding the games made by different members on the team, we’ve been part of various titles: Evil Glitch (developed by Giovanny Beltrán), King of the Eggs (concept art and QA lead by Mateo Robayo) and Evasion (music composed by Juan Garcia).

We also have some notable game jam participations: Short Term Battery by Mateo Robayo and Democracy Times by Giovanny Beltrán (both finalists in the Adventure Jam 2018). As a team, we have two game jam participations: Ludum Dare 42 with The legend of the looter and the incredible backpack that never runs out of space, and Game Maker's Toolkit Jam 2018 with Slow Ride. 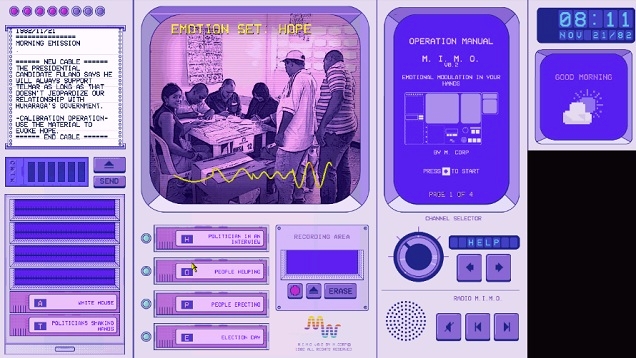 A device to edit news to manipulate emotions

In this game, the player operates a retro-futuristic-machine that was created to analyze and edit news that will be presented on TV to influence the public opinion. The player will select and sort the images associated with an event in order to evoke a specific emotion, and by using a complex optimization system, the player would be able to increase its impact on the audience.

Building a device to obscure the truth

For the hardware, we use Eagle to design and test the circuits, and Adobe Illustrator to build the plans and laser cut. Regarding the software, Machinaria runs on a Raspbian with a Python back-end and a JavaScript front-end. For coding, we use Sublime Text, Visual Code, and Vim. Music and audio were created using Ableton Live and Reaper.

For the physical device, we use acrylic and wood to make the case. The different parts of the machine are composed of our own PCB (printed circuit board), a RaspberryPi3, a 5’ display, a thermal printer, 6 LCD 16x2 displays, backlight buttons, RGB LEDs, a voltmeter, a speaker, potentiometers, a power source and a lot of cables and welding. 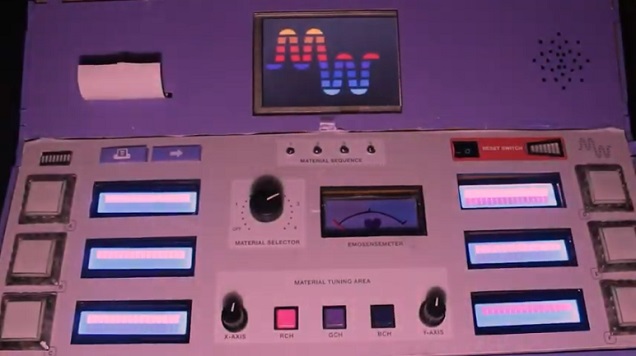 Exploring how media manipulates its viewers

Our goal was to use a video game as a way to make a criticism about how mass media controls information at their will. While studying about this topic, we found out that actually evoking emotions on the audience is a common practice in the TV news and politics in general. That was the reason we chose to manipulate emotions as our core mechanic.

Studying on how news is created and presented

There is a media theory proposed by Noam Chomsky and Edward Herman in their book "Manufacturing Consent" about how information should pass five filters before it is presented to an audience. The book describes how economic powers handle the media, and this vitiates journalism looking to gain acceptance from the public.

So, we studied how news is created: what is needed to structure, design, and categorize it. Along with this, we discovered psychological studies about emotions and how to evoke them by editing videos. We received the support of a psychologist with a master's degree in philosophy in this regard which widened our perspective around the concept.

This gave us an idea on what the core mechanic should be: manufacturing the news. With this in mind, we tried to simplify the idea and expose it as a metaphor. The player will evoke emotions and manipulate people's opinion using a powerful device created for that purpose. 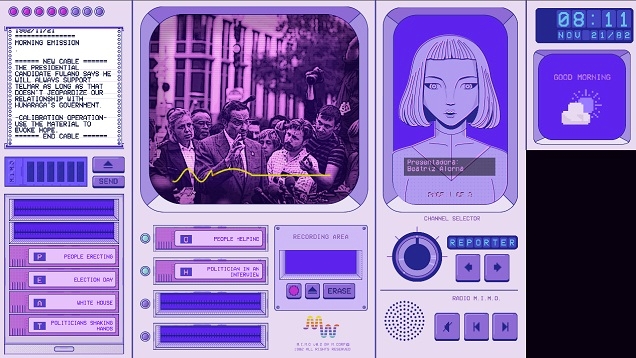 Seeking to inform on the bias in the news with Machinaria

Because a lot of people assume that the media is neutral and because of that, it is natural that they believe the information presented on the news is true and doesn’t have any particular interest or influence. After playing Machinaria, every person considers the idea of the media trying to insert opinions in our heads as shown in the game - sometimes it even resonates with personal experiences on the subject. This gives them tools to be more critical about the information they consume, not only on TV, but also on social networks, where fake news is very popular.

The idea is that the player understands some of the steps involved in creating news. Placing the players in that role allows them to experiment with this power and control, and explore the moral dilemmas that come up when choosing what is or isn’t correct, what people should think, and how to inform without establishing their own opinion, as well as facing the consequences that their decisions bring to the game’s world.

The appeal of Machinaria's unique controller

The machine is the game, and there is no other way to play it. We want to provide players with an immersive experience so they can act like themselves. A digital version of the game is in the works, but the feeling of controlling the device with your bare hands is something that you can’t compare. So, don’t miss the opportunity to play Machinaria if you are attending the GDC this year.