When life gives players lemons, they can grab onto a pair of pipe controllers and work together to blast them out of existence with Lemonade.
Alex Wawro
Blogger
January 31, 2018

When life gives players lemons, they can grab onto a pair of pipe controllers and work together to blast them out of existence with Lemonade. By manipulating the positioning of these pipes and turning a faucet, players can aim and adjust a spray that hits lemons and avoids the cupcakes, helping them get rid of the nasty lemons in their lives and only keep the sweet cupcakes.

Gamasutra spoke with Yuchen Huang, who spoke on behalf of the team that developed Lemonade, to find out more about working with plastic piping as a controller, how it made their game more approachable and easy to pick up and play, while also hearing about some of the challenges of creating a game using pipes.

My name is Yuchen Huang, and my role on this project is as the developer. Our team consists of 4 students from Parsons and we have complimentary skillets to make this awesome game. Jing Sun and Ziqiang He are good at physical computing and crafting. They made the controller with Arduino. Yaying Zeng is skilled in motion graphic design, as well as 3D modeling. 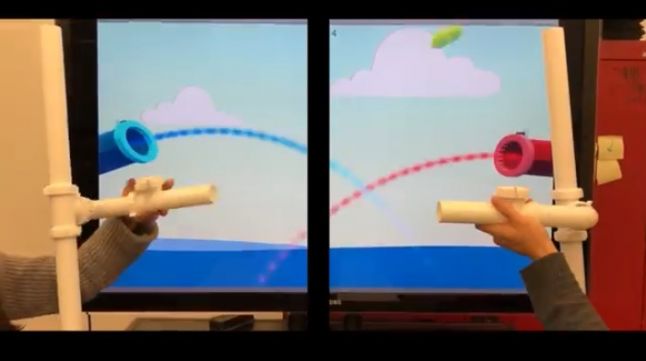 Our controller is innovative, but also very simple and easy to use. It’s inspired by water pipes or water taps that everyone is familiar with in their daily life. The only thing you need to do is to turn the water volume up or down and turn the pipes in the right direction to control the water pipes showing on the screen to shoot items with water. We believe the controller is fun and easy to use, but it’s also very different from normal controllers we see.

As Design and Technology students from Parsons, the four of us all are all skillful in design and developing games in Unity. Yuchen is a game designer who has developed a few games, both digital games and physical games. Jing, Yaying, and Ziqiang have experience in developing arcade games using Arduino and Unity.

What development tools did you use to build Lemonade?

We used Arduino connected to a Unity 3D game to build Lemonade. Also, we used Maya to build 3D models in the game. 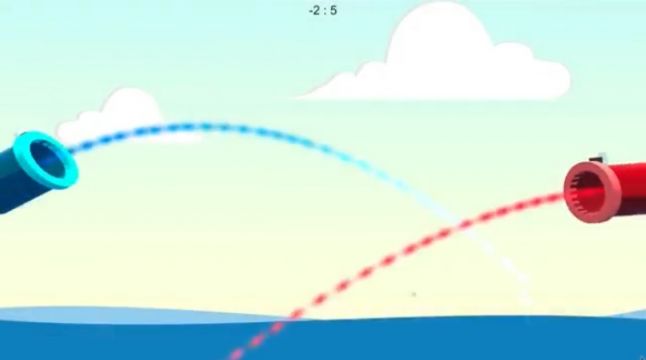 For the first prototype, we used plastic water pipes that we bought from Home Depot. The controller looked great and was very familiar to everyone. As for the next step, since the water pipes are not very sturdy to play with and the controller isn’t steady enough, we are considering trying different types of water pipes or even building our own. We also used Arduino and potentiometers to make the controller function.

Starting from conceptualizing, we have been working on the game for over 2 months now. We finished the first prototype and tested the game to around 30 players, and we will continue perfecting the game based on the feedback we got from the play test.

We started with the idea of making a casual physical game that multiple players could play with and interact with each other. Then, we got inspired by the classic phrase: “When life gives you lemons, make lemonade.” So, we decided to make a game for players to make lemonade. Since we also wanted the controller to be innovative and easy-to-use, we came up with over ten different ideas about the controller. We thought of using buttons or accelerometers which encourage the players to move their body. In the end, we saw water taps, and it came to our minds that we had never seen controllers like water taps, and it makes so much sense to make lemonade with water. That’s how we came up with the idea for the controller. 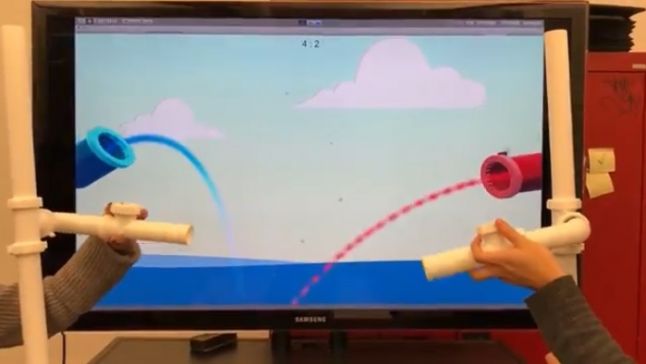 What difficulties did you face in turning pipes into controllers for Lemonade?

We tried a few different solutions for the controller. At first, we tried building the water pipes with laser-cut wood., but we failed since it was hard to build the rotating part. Then, we decided to try existing water pipes. We also tried different water pipes, but some of them were steel and it was impossible to put in the wires and sensors. The plastic water pipes were great because it's easy to attach and detach different parts, and the pipes are big enough for the wires to go through. We’re also trying other materials.

The most difficult problem is that the controller for now is too light-weighted and after several players played with it, the controller broke and we had to repair it a lot. So, we are trying to find a better solution.

What do you feel the physical controller adds to the appeal of Lemonade? Of watching another player across from you playing with a pipe to interact with it as well?

Lemonade encourages the players to have more interaction with each other. When we were showing the game at an arcade, players were excited to see a game played with real water pipes. The innovative controller is very eye-catching, and it also doesn’t require much time for the players to learn how to use it. Also, when playing Lemonade standing, the game became more competitive. As a casual game, we know that there’s a limited time how long a player can keep playing the game non-stop. So, we want to enrich the playing experience better so that the players can feel the excitement when playing Lemonade.

As for watching another player playing, it sure added more interaction between the players when they can see each other and how funny it is when they are playing with the controller. Facing each other added a lot more laughter to the game experience.

In my personal opinion, game interfaces have been changing a lot after smartphones and VR technology, but I think normal controllers like PS, Switch and XBox controllers, or even keyboard and mouse, will still be the main stream of the game industry. They are more universal, and you can play millions of games with them. Gamers are more comfortable playing with them and those controllers don’t require a learning process. So, the players can be more focused on the games themselves in terms of stories, graphic,s and sound. VR and AR games, on the other hand, are harder to learn and be good at.

I’m sure there will be more game interfaces created in the near future, and hopefully a brand new controller that is universal and better. As for the technology now, I don’t think VR and AR games will replace phone games, PC games, and console games.