Guitar Wizards draws a pair of players into a battle of song and light, having them play dueling guitars to launch magical beams at their opponent.
Alissa McAloon
Editor-in-Chief
January 16, 2019

Guitar Wizards draws a pair of players into a battle of song and light, having them play dueling guitars to launch magical beams at their opponent. Meanwhile, you have to launch riffs at your foe to stop their magical licks from taking you down.

Gamasutra sat down with the developers of Guitar Wizards to talk about how they turned a guitar battle into a crowd-pleasing throwdown between mages, how they helped those with little musical experience still create pretty songs, and how a natural cooperation still came of their competitive music game.

The people behind the music

For the last three or so years, we’ve largely been making games in our spare time, participating in as many jams as we can manage. As our interest in, and passion for, game design grew, we decided to shift our careers towards making games full time. McInnes now works as a creative technologist at a company specializing in interactive installations, and Kitching works as a producer at an independent game development studio called Free Lives.

Our teammates Sutherland and Wolthers work with Kitching at Free Lives. 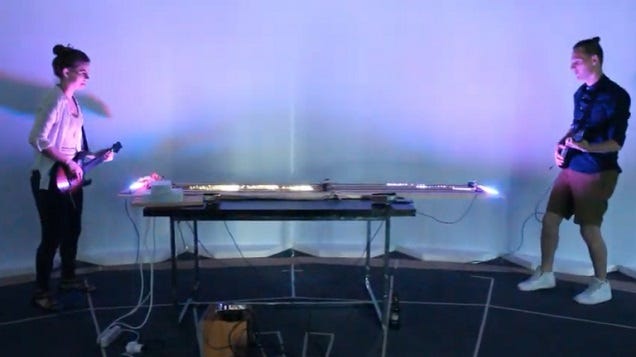 Creating the tools of musical battle

The full installation includes wooden and acrylic panels that sandwich the LEDs and enhance the sparkly effects (for maximum magic). We also used modified Guitar Hero controllers, and we’ll be bringing custom-made wizard hats along to Alt.Ctrl.GDC 2019.

Guitar Wizards is a rhythm-based dueling game that takes place across an LED battleground. Players use modified Guitar Hero controllers to fire chords at one another, and in the process create a magical spectacle of lights and sounds.

By taking away the screen, Guitar Wizards brings players face to face in an epic battle, and allows for a crowd to form around them. The game can be played competitively, as players try to outmaneuver one another, or it can be played cooperatively, as players settle into a groove and find a flow. By putting a guitar in their hands (and a wizard hat on their heads), Guitar Wizards aims to give players the freedom to perform, and to share a moment of fun with their opponents and onlookers.

Since we want as many people as possible to experience the magic of Guitar Wizards, we’re working on making the game more accessible. We’ll be bringing an additional set of controllers to the Alt.Ctrl.GDC exhibition that make it possible for the game to be played one-handed. 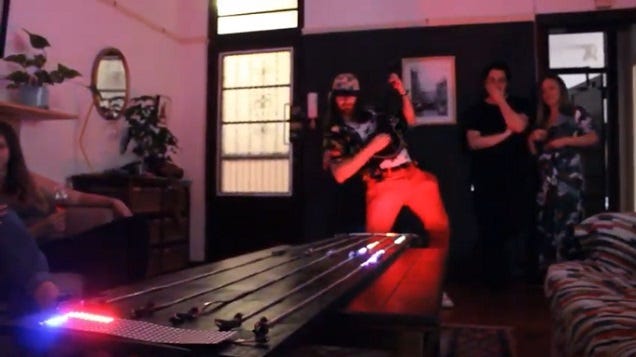 An inspiration for musical battle

About five years ago, we had a really exciting idea - a fantasy-inspired dueling game where spells were fired using gesture recognition gloves. Sounds cool, right? But it was also wildly outside of the scope of our abilities as game designers and developers at the time.

Fast forward to 2018, when McInnes happened to work on an LED project and discovered that our idea could be brought to life in a different way. He figured that the LED strips resembled the lanes in Guitar Hero, so we started exploring the possibility of using existing controllers in a new context. That also sparked our interest in adding a musical element to the game.

We both find the idea of casting a spell - of conjuring some effect in the world - really exciting, and we wanted to try to capture that with Guitar Wizards. The two-meter-long LED arena creates distance between players so that they can see their musical spells travel through space towards their opponent. To highlight the feeling of making magic, we added meteoric light trails to the notes, as well as sparkling effects for when they collide.

An important design consideration was also that we wanted the player to feel like a badass rock star wizard, which is at the same time the coolest and silliest thing to be. And that’s what we like about Guitar Wizards. It lets you step into that role, and then just lets you have some fun with it irrespective of your skill as a player or musician (or wizard for that matter). The incredible poster art that Luc made - which is part metal album cover and part Terry Pratchett book cover - leans into this idea very nicely.

Some of the best experiences we’ve had at games parties or exhibitions have been around games that are intriguing not only to their players, but also to the crowd around them. We love games like Johann Sebastian Joust (Die Gute Fabriek, 2013) and the shared experience it creates between players and onlookers. While they’re being played and watched, those games create little communities around them.

We did a few things to try to create the same kind of experience with Guitar Wizards. First, because the LED arena is two meters long, onlookers can easily fill up the space between players. We try to ensure that the game is set up on a low display table so that everyone can see what’s happening in the arena. Each player also has a distinct color, making it easy to follow the action. We deliberately kept the rules of Guitar Wizards simple so that it is easy to keep track of no matter when you start watching the duel. These considerations allow onlookers to understand the game state at a glance and to join in on the performance.

For us, the joy of alternative or unique controllers is really in their ability to bring people together. Whether its Guitar Wizards, or one of the other incredible entries into this year’s Alt.Ctrl.GDC 2019, alternative controllers invite people to share a physical space and a moment of silliness or confusion or mastery. We think that’s really special, and something worth celebrating. 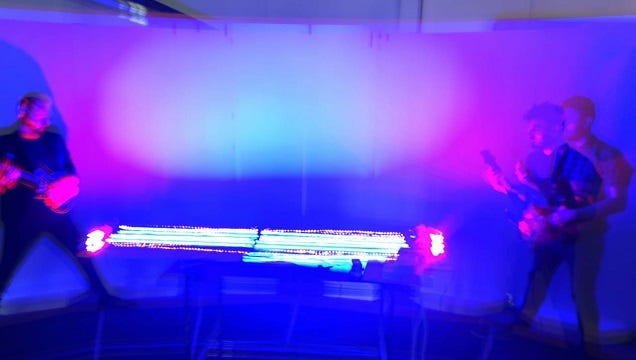 Guitar Wizards was built as a competitive game, but during playtesting we found that some players were more interested in a cooperative experience where they could fall into a rhythm with one another. Even within the competitive framework we’d created, players were finding ways to work together, and were using a call and response play style. Since this is a really exciting outcome, we are exploring game modes that support collaborative play further.

Creating harmony regardless of instrumental experience

We like the idea of a low-pressure environment where people with different levels of skill (or even interest) in music can feel like a rockstar. Maybe that comes from a selfish desire, since neither of us particularly good musicians.

Sutherland did an amazing job of making sure that the notes that are played are not discordant. You can play them in whatever configuration, and they’ll always sound harmonious.

As the game progresses, the speed at which the notes travel also increases. If you can keep up, which you’re bound to with a little practice, you’ll also get the feeling of playing a lightning-fast solo. Sutherland also produced a backtrack that establishes a beat, and makes it less daunting for players to start firing off notes. With a backtrack you’re building onto something that already sounds good, instead of having to create that from scratch.