Grave Call buries a player in a coffin with a smartphone and a low battery, having them communicate clues with a police dispatcher in order to be found in time.
Kris Graft
Publisher
February 12, 2018

Grave Call buries a player in a coffin with a smartphone and a low battery, having them communicate clues with a police dispatcher in order to be found in time. The dispatcher and the buried victim each have different clues, though, and through communicating those clues back and forth to one another, they can hopefully escape this predicament. The phone's power is slowly draining, though, and there are many places the coffin could be.

Gamasutra spoke to the developers of Grave Call (which players can take for a chilling spin at the Alt.Ctrl.GDC exhibit) to learn about setting up different clues between each person, how they encouraged players to communicate, and how they made sitting in a coffin just a little bit more comfortable.

Melrose: My name is Mikael Melrose and I’m the Lead Designer on the project. This meant that I was in charge of how the scenarios were structured and most of the scenarios themselves. I also made sure that both the cellphone and the map felt natural to control.

Granstedt: I’m Julia E. Granstedt, and I am the team’s Lead Artist. I mostly focused on the phone app and its interface.

Kolankowski: My name is Steven Kolankowski and I am the Lead Programmer of the team. I worked on the code of the phone app and the internet connection to guarantee the voice communication between the devices. I also designed and built the coffin. 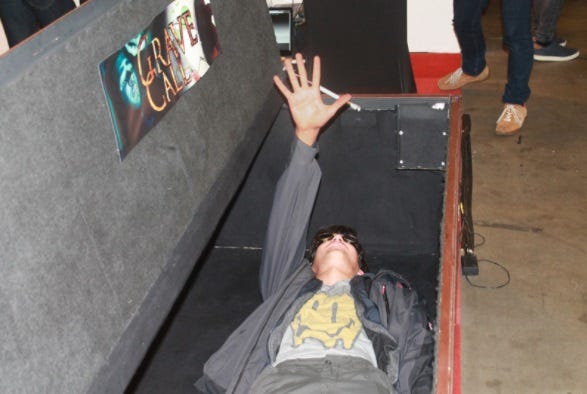 Melrose: This is a two player cooperative game, so both players control their aspect of the game a bit different from each other. Both of the players use a touchscreen to play, the buried player has a phone and the dispatcher operates on a screen. We've made the phone to emulate a real smartphone as closely as possible, so navigation feels intuitive and familiar to new players. To get this response from the dispatcher, too, we took inspiration from the design of Google Maps, while adding some extra mechanics on the same screen, like sending police patrols to locations by simply tapping on them as well as using a criminal registry.

Melrose: We are all students of Uppsala University studying game design in second year. We are studying in different minors with three programmers, two artists, a project manager and a designer. We made this project as our second digital game in our first year.

What development tools did you use to build Grave Call?

Kolankowski: As our main development tool we used the game engine Unity3D. We made a Windows build for the dispatcher computer and an Android build for the smartphone. The smartphone and the dispatcher station communicate events between each other using the backend App42 API and the voice communication is achieved using the plugin Photon Voice. Both the smartphone and the computer are connected to the internet in order to work. Most sound effects in the game are played using the FMOD API.

Melrose & Kolankowski: We built the coffin ourselves using some scrap wood that we got from a local theater. We then painted the outside with a dark brown paint. For the internal part, we covered all the wood with black fabric, so that it could help to insulate from the external sounds and it could cover all the little light slits. In order to create some ventilation, we installed two computer fans on short sides of the coffin that get activated by a switch when the lid is closed.

For the digital components, we installed some speakers inside the coffin to simulate environment sounds, we used a laptop and a touchscreen for the dispatcher player and a smartphone for the buried player. 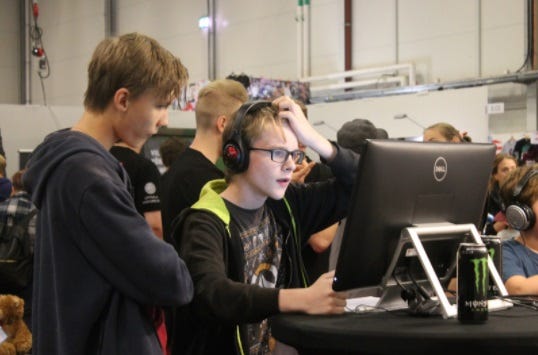 Melrose: As this was part of a course, we spent about two month invested in this project from developing an idea to the finished product.

Melrose: As we were brainstorming ideas to each other, we felt that we wanted to make a game based on Escape Rooms, but felt it would be hard to make it into a digital game while still getting the same kind of feeling of actually being trapped. As I was pitching the idea of actually trapping a player in a coffin with someone outside it to help them, the group felt it was to extreme and that it wouldn't be appealing to be trapped in a coffin for ten minutes.

So, when we were pitching all of our other ideas to the teacher to get greenlit for a project, he didn’t seem super interested in any of our ideas. As the meeting was coming to an end and he still didn’t like anything, I just blurted out: “What if we were to bury a player inside a real coffin?” and he burst out laughing.

Granstedt: Yeah, and really early on we noticed that all of us liked the idea of creating an asymmetrical co-op game with “scary” elements, but we felt that the direction that the idea had grown was not fit for our target audience, as a lot of children around the age of 12 would attend the Gotland Game Conference where our game would be exhibited. When we actually did display the game with the intent of only appealing to an audience of 16+ years, the younger ones too showed a great interest in playing Grave Call.

Placing one player in a coffin could be a stressful experience. What steps did you take to mitigate this discomfort?

Melrose: As we explained in the building aspect of the coffin, we had fabric in the coffin to make a bit more comfortable, and computer fans in order to create ventilation. Even though it's completely dark inside the coffin, the player always have the phone as a light source. But the biggest aspect is probably that you are talking to someone who will try their hardest to help you get out and comfort you along the way. If that's not enough, you can always push the lid of and get out.

Granstedt: We’ve also made the coffin really big. When we’ve exhibited the game, we’ve made sure that one developer informs the buried that they’ll stand beside the coffin to assist them if they want out. We’ve had several people come up and say that they’re claustrophobic but still want to play the game, and of course we want to cater for them too.

Although, the discomfort is a conscious design decision. We decided not to fluff it up too much, so that we could effectively create an immersive experience for both players. The impact that the discomfort has on the buried player also influences the dispatcher, and creates a bond between the players. 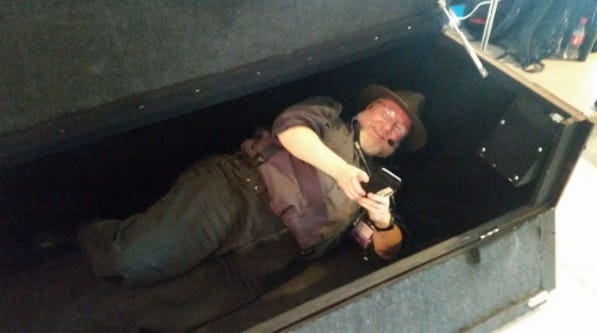 What thoughts went into creating the clues on the player's phone? In making something a stressed player would be able to work through quickly (or not)?

Melrose: We wanted the player’s interaction with the game to be as smooth as possible, so the clues have been formed around what one could find within a smartphone. For example: pictures, messages, or even a locked app that requires a password.

As the dispatcher sends out patrols to different locations, they will also be able to find clues. These are more in the form of how a policeman could report from a crime scene, or what witnesses have said.

The players never have the same clues, but clues either one gives to the other will uncover more clues as both of you work your way to the location of the coffin.

What do you feel the low battery on the phone, and the high number of locations, adds to the experience?

Melrose: The high number of locations is there to balance out the instant accessibility to clues that we have in our game. We want the players to have all the information from the start, but still not be able to find the location without putting two and two together. So, with as many locations as we have, it's very hard to just guess, and the strategy focuses more on a controlled type of dispatching units, instead of spamming them.

With the low battery, we definitely wanted to encourage the players to feel pressure, and not just casually go through the phone, which we found was a very effective way of increasing the amount of communication between the players, related to the battery percentage.

What difficulties do you face in creating a game about communication between two people?

Melrose: The most difficult thing is actually getting the players to communicate, especially about the weird and seemingly unimportant facts on the phone.

Granstedt: I was hard to balance the difficulty and how obvious or discrete certain clues should be. We kind of had to think of it as creating a jigsaw puzzle for two players, but strategically splitting the pieces up into two bags and handing each player a bag, but at the same time not letting them see each others pieces so that they have to ask what pieces the other player has so that they help each other see the bigger picture.

Kolankowski: The technology is making a lot of progress, especially within the game industry. My opinion is that in the range of five-ten years, VR technology will take the lead over other game devices. Having tried VR, I think it is a really unique experience and it could give new ideas to the developers to create new kind of games in the future. It’s just matter of time!

Melrose: I think it’s super interesting to see what Nintendo comes out with next. Both with their controllers and the newly-introduced Labo. I think the Labo will get lots of great and innovative games developed for it that will appeal to many. But the standard Interfaces in this short period of time will most likely stay the same.