Cook Your Way is both aÂ cooking game and an immigration test, turning the act of making food into a way of seeing if a migrant is worth allowing into a country.
Alissa McAloon
Editor-in-Chief
February 26, 2019

Cook Your Way is both a cooking game and an immigration test, turning the act of making food into a way of seeing if a migrant is worth allowing into a country. Through its mechanical look at making a traditional Brazilian dish, it looks to explore the way immigration becomes a form of meritocracy, where the migrant must fight to show their value to the country they're trying to get to.

Gamasutra spoke with Enric Llagostera, developer of Cook Your Way, to talk about how the developer used the framework of cooking to talk about immigration, how the controller mimics the confusion and tension of the immigration process, and how play can hopefully help us start dialogues about challenging topics.

I’m Enric Llagostera (he/him), and I designed, programmed, created audio/visual art, built the controller, and wrote for Cook Your Way. It is mostly a solo project in terms of game making, but with the work of other folks in conversations and in creating the videos (made by Vjosana Shkurti).

I started making digital games around 2008, and I have always been interested in experimental and different ways to interact with them. I have been studying the connection between game design and political critique and action since my masters, and have been involved in community organizing around these topics. In that time, I have also worked as game designer and game design educator. 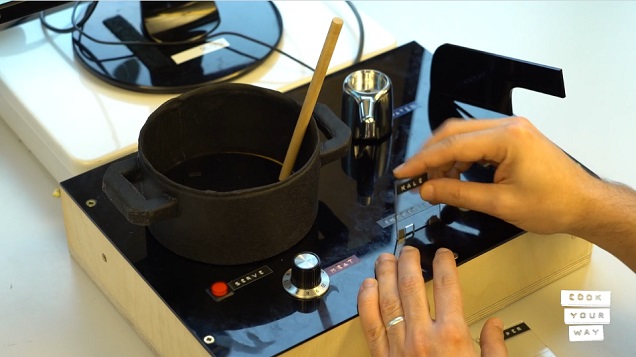 In Cook Your Way, you play as a Brazilian person applying for an entry visa to an undisclosed country. As part of that process, you are asked to use a cooking station to prepare a feijoada completa, a traditional dish from Brazil, in order to show the authorities you can contribute to their society. The cooking is done using a standardized device that has interfaces for different actions, like adding ingredients, stirring a pot or chopping vegetables, which must be done precisely as instructed on-screen by the immigration judges/chefs.

For some time, I had wanted to make a game that drew from my experience as a migrant, and those of friends and acquaintances. One of the things that I wanted to talk about was the narrative of meritocracy: the widespread stereotypes of “good” and “bad” migrants and that migrants must somehow “earn” their place in a new society, or that we must be extraordinarily successful to be valid. When coming up with design ideas, I looked at examples of other media that focused on this kind of meritocratic and individualist vision, and cooking contest TV shows stood out to me. They are already games, completely focused on performance, and success means living up to the high standards of the contest judges.

The focus on cooking is also related to other questions. First, often times multiculturalism is commodified, with cultures being reduced to what in them is viewed as productive or valuable by the establishment. Migrant foods, for instance, become the “exotic” or “authentic” other, the variety needed to liven up the palate. Second, cooking is a complex activity, which can be private/public, unique/industrialized, valued and also often dismissed. The ways in which we cook for ourselves and others are varied, and looking at the specifics of it points to many other issues present in a society, its relations of power, and more. So, the design idea started to develop from this juxtaposition of meritocracy, cooking, and lived experience as a migrant.

Creating a cooking controller with a deeper meaning

The development of the software parts were made with the Unity engine and the Arduino programming suite. The visual art was made using Aseprite and the Doodle Studio 95 tool.

The cooking station controller was made using a variety of materials. The electronics are an Arduino Mega with some potentiometers, a rotary encoder, a card edge socket, and a few pushbuttons. Those are off-the-shelf components bought from an electronics shop. The top panel, ingredients chips, and chopping knife are made of acrylic and aluminum tape. The cooking pot was sculpted with Worbla, a thermoplastic that is easy to mold and shape, over a cardboard shape. The controller case itself is plywood.

More info on the build is available on the game’s website, with a video and written info on the parts and design of the controller. 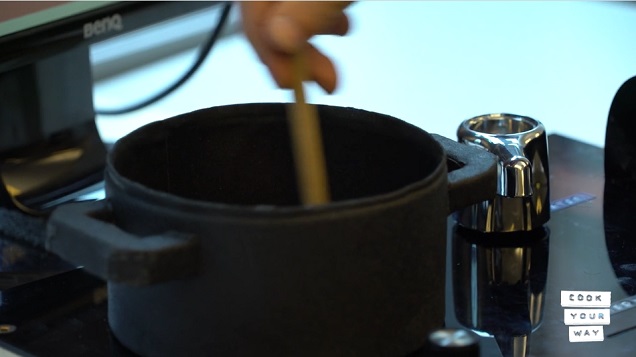 Cooking as an immigration test

The focus is not in creating a realistic simulator or an especially expressive version of cooking; I am interested in embedding contradictions into the interactions. I tried to make the controls feel similar to cooking, but also very unfamiliar, with an artificial and vague quality to them. The cooking is almost an abstraction that stands in for other forms of labor too -- one end-point in a wider system.

The idea was to make the controller look somewhat industrial, making a reference to the increasingly elaborate technologies used in airports and border checks, while also being about something closer to more intimate everyday life. This is also why the game includes elements of surveillance, like the webcam-based identification procedure. This mechanized version of cooking is meant to question how immigration systems process people through language tests, “values tests”, and create obstacles to providing migrants with rights and status.

A controller built to raise questions

The play style of the game explores what are oftentimes confusing and demanding processes of dealing with immigration systems. It turns the application process into an interview, with questions mixed with cooking instructions that must be performed with the custom controller.

I tried to create parallels between the work players are doing following a recipe and having to answer and convince the judges, juggling the focus of attention. Some instructions and comments are somewhat contradictory -- the recipe sometimes is not that similar to an actual feijoada, there is time pressure, and detailed evaluation. There is also a certain degree of surveillance going on, too. The controller is a consequence of these design ideas, I tried to make it in a way that it pushes that argument forward, raising its own set of questions to players: why does it work in these particular ways?

The challenges of creating a cooking game that explores immigration

An important challenge, which will always be present, is that the game is speaking from a specific, situated, perspective that cannot be generalized to all experiences of migration. The privileges I benefit from as a straight cis man with an immigration status (as an international student) shelter me from many forms of oppression that afflict migrants in other situations. The game design and arguments I’m pushing forward with Cook Your Way point to parts of these systems of oppression, but cannot form an extensive picture. I hope the game adds to ongoing conversations.

Another challenge is that the game deals with uncomfortable and distressing topics, and from the start I tried to mitigate risks for players of reliving trauma or downplaying their impact. This is reflected in the game design, how players are introduced and consent to playing the game, and its debriefing, and how to link that experience with the after-play moments. It is also a concern that shaped the way humor plays a role in the game, where I try to always “punch up” and to point the narrative towards the system’s absurdity and contradictions, not to an individualized judgment of the players.

Finally, I think another challenge was to make sure that the game is not downplaying the importance of foodservice and the labor involved in cooking. On the contrary, this is really crucial for a variety of reasons: the cultural importance of food, the migrant workforce in different parts of the food industry, the often very gendered division of labor around food preparation. Cooking is a complex topic, and I tried to show this through the writing, the attempt to create a kind of cooking-but-not-really quality of the controller. My goal is to bring that complexity and importance forward, not to downplay it. 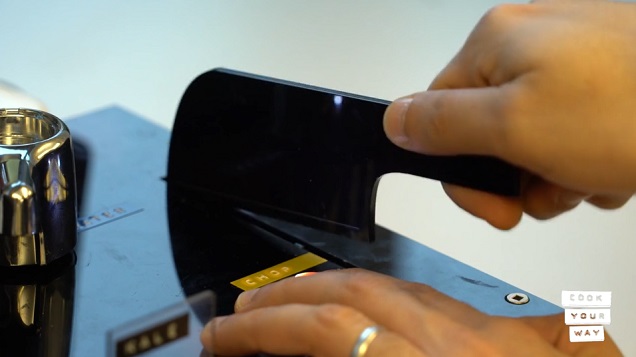 Creating a dialogue through cooking

As a general goal, especially for players who are not migrants themselves, I hope the game can provoke reflection about their views on migration, how they support or resist oppressive systems by action or inaction, and the different questions it intersects. The present growth of xenophobic and racist discourses and policies blaming migrants for problems caused by capitalism and colonialism is an urgent issue. I hope the game and the questions it raises can help to point to organized collective actions based on solidarity across borders.

As for the game’s take away for myself and other migrant players, I hope that the game can be a kind of a conversation starter, an invitation to share diverse experiences, their similarities and differences, in ways that can lead to growing solidarity and dialogue. This is also a reason why I built a modding system for the game, so that players can propose and tell other stories through the game system too, so that the game extends this reflection further, and I hope to organize workshops around that soon.

I don’t think that Cook Your Way specifically gets its point across in an easier or better way than in other media because of being a video game - it’s just more of a different approach. I believe that play that focuses on difficult topics has a variety of consequences. First, it helps to establish that play is a valid and important venue for careful political engagement with such topics. Second, I believe playing is a powerful way of thinking, feeling, and acting through contradictions and power relations, and how they intersect with personal lives. Finally, games can create tension in unusual ways that might change how people approach difficult topics, as play has a way of connecting contexts to experiences that I believe is relevant and productive.

The value of unique controllers

I think that unique controllers help to make the play experience urgent and draw attention to the materials and embodiment of the ways we play. Engaging with a unique controller is a way to engage with a different invitation for play, one that can draw from sets of skills, gestures, and backgrounds other than what conventional interfaces draw upon.

I believe that using a unique controller is crucial for Cook Your Way, because the gestures, actions, and materials of the controller are integrated with the game’s topics, while also pointing that maybe different actions could be there, that there is a space of possibility around the game. I find that this tension is very productive for games that focus on political systems.