Bot Party lets players make beautiful music together through touch and machines, having them make physical connections while holding cute robots to produce songs. Through skin-to-skin contact while holding onto one of these adorable robots, players will be able to make them play music, creating art from contact.

Gamasutra spoke with Phoenix Perry, creative director for Bot Party, to learn about the draw behind making human connections that comes out from playing the game, as well as the natural joy and wonder that the game encourages from its players.

I am Phoenix Perry and I’m the creative director on this project. 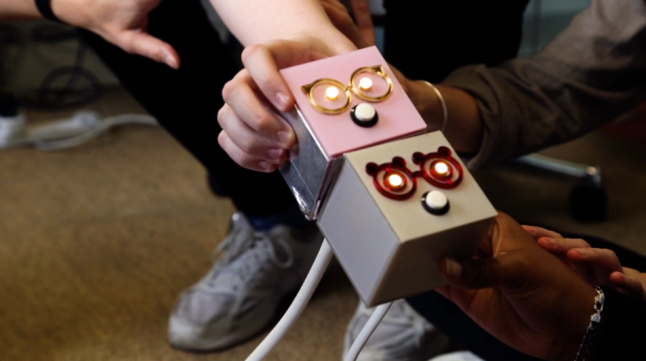 This is a game played by holding hands with your friends. You can also move around together to make music.

Bot Party isn an interactive sound experience for humans. The bots have a problem. They have no way to communicate with their friends. Can you help? They need you to touch another human holding a bot. Through you, the bots use the proprietary bot to skin to skin to bot communication protocol (BSSB) to send encoded secret messages to each other. Watch out, bots can be tricky, so start using advanced, secure communication protocols. Hold hands with other players to get the bot sound spectacular started!

I started making games in 2004. My first game was a point-and-click comic book style adventure about bees and hive collapse. Since then, I worked on a wide range of games including everything from weird art games to advertising games and games for social change. Currently, I run a MA degree program in Independent Games and Playable Experience Design at Goldsmiths, which I created. I also am a founder of Code Liberation Foundation, an organization which supports women and gender non-conforming people to make creative projects and games.

What development tools did you use to build Bot Party?

Our tool chain is straightforward. For game creation, we use Unity. Hardware wise, it’s Arduino Uno, an LSM303 accelerometer, a couple of buttons and LEDs, and some handmade aluminum sensors we routed on a CNC machine. In terms of fabrication, we used a laser cutter to cut the cases. We used Autodesk’s Eagle to fabricate the circuit boards. The visual design was done in Illustrator and Photoshop. The sound system uses a nice open source plug-in called Helm. Initial prototypes were done in Max.

We used metal, acrylic tape, and plastic for the final cases. For the initial prototypes we used wood, tape, and tinfoil. When I was designing the sensor algorithms, my oscilloscope was a much-used tool. 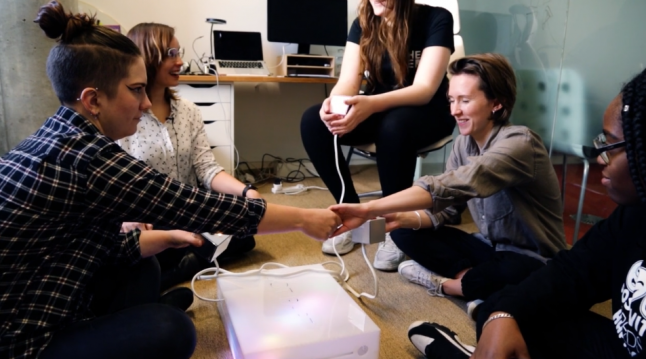 Personally, I’ve spent around 550 hours. I would say that by the time we hit GDC it will be closer to 650. On top of that, other team members have contributed to programming audio, game development case fabrication. Most likely, if you add everything up, we’re going to be around 900 to 1000 hours by Alt Ctrl.

Bot Party is part of a larger research project that I’ve been working with for a couple of years. My research aims to develop physical games the prioritize non-visually dominated human sensory experiences. Particularly, with Bot Party, I’m interested in encouraging prosocial behavior in my players.

Why was touch such an important part of the game you wished to create? Why create that physical contact between players?

Touch between people releases neurotransmitters in our brains that elevate mood, relieve anxiety, and encourage social bonding. It’s also shown that making music together in groups achieves a similar effect in children. Combining these two kinds of experiences together, it’s possible to create a game experience that focuses on creating delight, happiness, and wonder. Who wouldn’t want to do that? 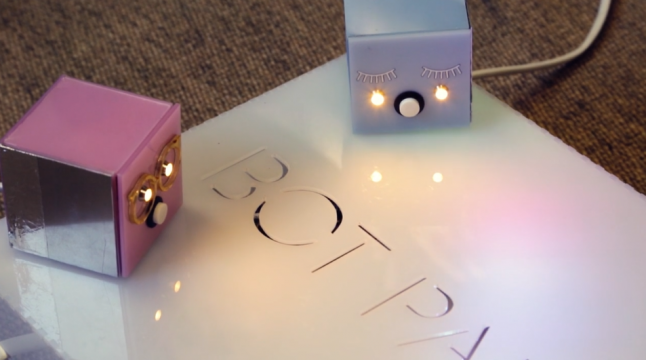 What challenges did you face in making human contact such a large part of Bot Party?

I think Bot Party can be overwhelming for people who have phobias of being touched. I am one of these people, and often showing my game requires allowing strangers to touch me for hours on end. In some ways, it’s like extreme aversion therapy. I think many people are hesitant to touch strangers. This kind of fear often leads to a basic mistrust we have of each other. Furthermore, I think it’s very important that players be consenting players. I’ve yet to see anybody be disrespectful while playing, but it could possibly happen. The sweetest players I ever saw were two men who worked out they could play the game by repeatedly kissing each other.

What drew you to make each of the robots so cute? What did that add to the experience?

By making the bots adorable, we make them approachable. You want to pick them because they look sweet. Their softer colors and lighter design are also indicative of the kind of emotions we hope people feel when they interact with them.

It’s a very exciting time to be creating in this space. Nintendo’s Labo with the Switch is the first foray into expanded play we have seen in handheld devices. I think other companies are looking to see if that project succeeds or fails. As mixed reality continues to grow, I believe there will be a demand from players to have augmented objects in their games and lives. There’s a potential for creators from the maker movement to merge into the games community and yield a whole new genre of physical games. This is the area I am spending all of my energy developing in, and I believe we will see the market recognize the possible value of this over coming years.

That said, we really need to be pioneering in how we think about play. Repeating the mistakes of mobile and by embracing the full potential of an embodied sensory experience would be shortsighted. Just as Monument Valley did not come out of a traditional games studio, I believe you will see the best work in this discipline emerge from other fields and new creators. Alt Ctrl at the GDC is a bit like some of the VR exhibitions that happened in the early 90’s. These games are prototyping out what is possible and this exhibition as well as other venues like Shake That Button are worth following. Over the next 5 to 10 years, you will see these prototypes become increasingly more adopted.