I managed to make it to E3 this year, though I had to dip in and dip out real quick.
Game Developer
Staff
June 15, 2011

I managed to make it to E3 this year, though I had to dip in and dip out real quick. I met up with Chris and we had lunch basically as soon as we got there. I owed him a drink for going through with a pitch for a crazy game concept at work and getting them to actually accept it -- I figured it might be too nerdy for the world of "social" games, haha. I guess you never know till you try! 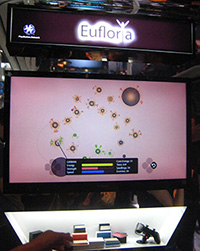 So as we scooted around the floor, avoiding long lines, we eventually walked past Eufloria -- a PlayStation3 downloadable title. One of the developers, Alex May, coerced me into playing by placing a controller in my hand. I feared for my life so I started playing. I was confused and had no idea what was going on at first, but after a few minutes of practicing the controls (i.e. mashing buttons) and following Alex's instructions, I was up and running. From what I understand, Eufloria is a bit like an abstract RTS. Your units spawn from trees on asteroids and your objective is to generally destroy the units of another team or conquer a certain asteroids. Something like that...

Chris and I talked with Alex and the other developer, Rudolf Kremers, about the game for a while. They explained how they had competed in some competitions, selling the PC version through Steam and currently working with Sony on Playstation. It was inspiring to talk with these guys first-hand about their experiences fighting the Good Fight. Additional evidence that you can get it if you really want.

The next day I was able to meet up with the homie Nathan Fouts of Mommy's Best Games and check out Serious Sam: Double D. Through a mix up involving me not knowing what Nathan looked like, haha, I ended up playing a bit of Serious Sam 3 at first, which was good because it introduced me to what Serious Sam was about. I started in the middle of the desert and it wasn't too clear where I should go, but as I played I ended up following the path of swarming enemies coming at me. I remember a part where I was lost and saw an enemy coming over a dune, I went after him and saw my next objective. From what I saw, I liked that the map was very open and lured me to where I was supposed to go with enemies. 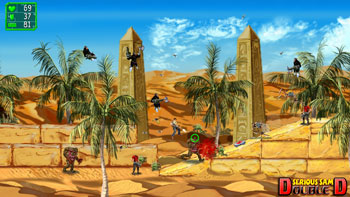 Next I played some Double D, which is a sidescrolling shoot 'em up created in XNA. The game pretty much plays like Weapon of Choice, which was released for Xbox Indie a while back. You run and shoot, and can aim in any direction with the right analog stick. The major difference to me was the pacing and linearity of the stages, I remember Weapon of Choices stages being a bit more open-ended. You're constantly being bombarded by enemies, I found myself dying a lot and scrambling for health. As I got a feel for the aiming, I had fun with it. There was a good amount of variety in the stage that I played.

After that, Nathan introduced me to Ian Stocker and his homeboy James. Ian created the Soulcaster games for Xbox Indie, which I had read about but haven't played. We got to chitchatting about how there was so much variety and exciting unique games at E3 or something like that. Nathan chastised me for saying that I may not charge for Donut Get when it's released and we had a bit of a discussion about that. He gave me some points of reference, some games that have tried some different payment methods. It's definitely got me thinking and shown me the value of being able to discuss these things with others. Also, Ian let me play a bit of Escape Goat, which I thought was a pretty awesome from what I saw. Random artwork, but the game mechanics are really fun. I've got a soft spot for this kind of adventure game.

I ended the work week with checking out the Joystiq event at the La Cita bar in Downtown LA. I got drunk and watched people play  Dance Central. I learned a bit about Retro/Grade, with the sweet visual effects. I watched and played a bit of Retro City Rampage -- Brian Provinciano gave me a bit of a rundown of the game. It looks super fun and easy to get into. Talked a bit with James Silva, he gave me some good stories about he's been doing the damn thing with The Dishwasher and Z0MB1ES. Got confused with Monaco. Saw a lot of people waiting for Spy Party. I bumped into Rudolf again, chilled for a bit, drove home through traffic, and passed out.