Overview of the 7dfps challenge, for our Smash TV inspired game; No Way Out!
Karl Inglott
Blogger
August 17, 2013

This is kinda an overview of our time on the 7dfps, as well as an introduction of our dev team.

We (6 of us!) are Space Budgie, located in sunny Scotland, more specifically, Dundee. We are all recent graduates from Abertay, and decided that we would have a shot at indie development.

Our 7dfps challenge game, No Way Out, is the first game we have worked on as one unit. We do have two other games in development (one is close to completion) but we have been working in two teams, each team on a different project. Our two other projects are 9.03m, and Glitchspace.

Firstly, let me explain what our vision for No Way Out was, then I'll move onto what we submitted.

No Way Out was supposed to somewhat mimic the gameplay of Smash TV, but from a first person perspective. We wanted it to be fast paced, tense, to give the player an array of weapons, powerups, challenges, and to also give the player choices. 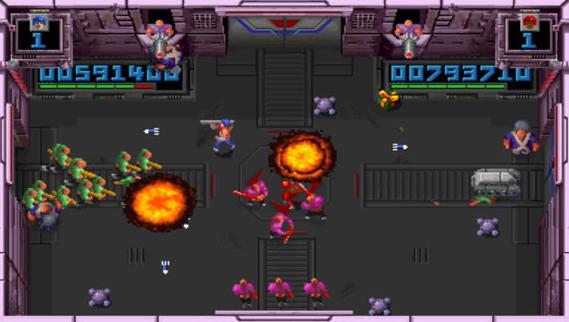 ^ Smash TV Screenshot
In Smash TV, the player must kill all of the enemies in a room, and can then progress to another room. The player can choose one to progress to, but is sometimes restricted to one, or two rooms.

As in Smash TV, we wanted doors on each wall, which the player could enter once the enemies were cleared. The main difference was that we would either procedurally generate the room ahead, or we would randomly select it from pre-defined levels, to create a potentially endless game, which would always progress differently in each playthrough. We also wanted to convey the difficulty of each room, and hint at the potential rewards inside using monitors above the doors. Giving this information would allow the player to choose whether they wanted to risk losing for a good reward, or take the easy route to extend their progress.  Rewards would have included cash, weapons, and perks. We also planned for a hallway or waiting room between each combat room, which would allow the player to spend some of the cash they had collected, in exchange for weapons, health, armour and perks. Furthermore, we wanted the game to end if the player died once. Our other goal was to make the game multiplayer.

Overall, we have partially achieved what we set out to do, although we would probably need another week to get the rest in, and to fine tune, tweak and polish up the gameplay, art, audio, and code. The game is multiplayer, and it randomly selects the rooms from 40 pre-defined ones. It's fast paced, has pickups, weapons, different enemies, and later in the game, it gets pretty insane! We didn't, however, get in the monitors above the doors or the ability to spend cash for items and perks. These elements would have added a whole new dimension to the game, one that we think would make it even more super fun! We also got bogged down on feature lists and the gameplay suffered as a result, playing more like a typical fps, than a Smash TV fps.


Anyway, we had a fantastic time (albeit a sleepless one) and it was a great experience!

You can check out the game here: http://7dfps.com/?action=games&id=114

You can also find us on Twitter here: https://twitter.com/SpaceBudgie