New research from Omdia shows that the consumer virtual reality (VR) market will be worth $10bn by 2025. In 2020, 3.3m standalone headsets will be sold, outselling combined smartphone and tethered VR headsets for the first time.
George Jijiashvili
Contributing Writer
November 30, 2020

•  By 2025, 45m VR headsets will be actively used by consumers, who will spend $4bn on VR games and other media.
•  The total hardware and software value of the consumer VR market will grow from $3.2bn in 2020 to $10bn in 2025.
•  In 2020, 3.3m standalone headsets will be sold, outselling combined smartphone and tethered VR headsets for the first time.
•  Spend on VR content will grow from $1.1 in 2020 to $4bn in 2025, overwhelmingly led by games.
•  VR will remain a niche, but a growing consumer entertainment market over the next five years.

New research from Omdia shows that the consumer virtual reality (VR) market will be worth $10bn by 2025. The latest outlook comes from Omdia’s Consumer VR Headset and Content Revenue Forecast 2020-2025 report, a deep dive into the VR market with individual forecasts for 32 countries. It predicts that in 2020, 6.4 million headsets will be sold, while the spend on VR content will reach $1.1bn.

After getting caught up in the industry hype and proving unable to live up to the unrealistic expectations set in 2016, VR is now undergoing a much-needed period of readjustment. The product mix of the VR installed base is changing rapidly; away from rapidly-abandoned smartphone VR headsets to more engaging standalone and tethered VR headsets.

Despite the persistent doom and gloom stories about the future of VR, Omdia believes that the VR market will continue to expand, albeit at a slower rate than previously anticipated.

Covid-19 lockdowns boost the VR category in 2020, but mass adoption remains well over a decade away

As with the broader games market, the consumer VR segment experienced an uplift in spending during Covid-19 lockdowns in 2020, nudging the content spend just over the $1bn mark. Its full potential was however limited by manufacturing challenges in the first half of 2020 and the November launch of next-gen games consoles diverting gamers’ attention and budget.

Not accounting for multiple ownership of VR headsets, the household penetration at the end of 2020 will be a mere 1.2% across the leading 32 countries forecasted in Omdia’s report. This will only grow to 3% in 2025, highlighting the long road ahead for the mass adoption of VR. 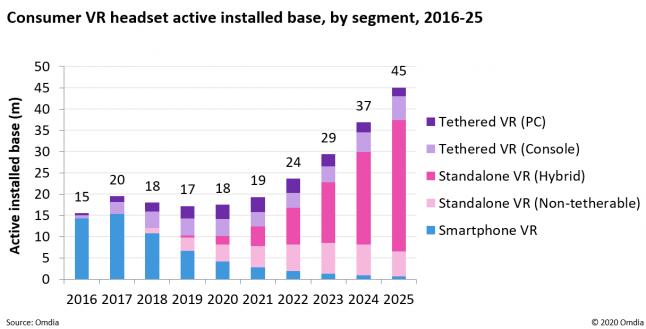 Facebook’s Oculus Quest headset was able to successfully balance the all-in-one form factor with a high-quality immersive VR experience at an attractive price point. With the Quest 2’s price starting at $299, Facebook is making high-quality VR more accessible than ever before. As a hybrid headset, Quest straddles both standalone and PC-tethered categories, giving its owners flexibility and access to a wider selection of content. Omdia estimates that 1.2m units of Quest devices will be sold in 2020, growing to 5.6m units in 2025.

Facebook’s aggressive loss-leader strategy has meant that other headset manufacturers simply can’t compete, leading to many shifting their focus to the adjacent enterprise VR category. We nevertheless expect more successful consumer standalone VR headsets to emerge over the coming years, particularly from China. Omdia forecasts Facebook’s share of global standalone VR headset sales reducing from 48% in 2020 to 35% in 2025.

Valve’s PC-tethered Index headset resonated well with dedicated PC gamers looking for the best of what VR has to offer. A combination of high-resolution display, innovative “Knuckles” controllers and proximity to the launch of highly anticipated Half Life: Alyx VR game were its main success factors. Its high starting price of $999 and requirement for a powerful PC has, however, limited its appeal beyond this niche.

HTC is rapidly losing ground to Oculus and Valve in consumer VR, as it couldn’t replicate the initial success of Vive with its new Vive Cosmos headsets. At a time when Facebook is discontinuing its Go and Rift headsets and consolidating its efforts into a single device (Quest), HTC continues to expand its product range with hopes to appeal to wide range of consumer and enterprise segments. While a broad portfolio strategy is appropriate in mature markets such as smartphones, Omdia believes HTC is risking spreading itself too thin in the still-nascent VR category.

Sony recently confirmed that the follow-up to PlayStation VR (PSVR) will not arrive in 2021 – a logical decision, given the company’s laser focus on production and sales of the recently-launched PlayStation 5 (PS5) console. Omdia now believes PSVR 2 will launch at the end of 2022, featuring inside-out tracking and possibly a wireless tethering capability. Until then, the existing PSVR usage is expected to wane: PS5 console owners must order a free adaptor for using PSVR – small, but a significant barrier. Meanwhile, stream of new VR games is likely to slow down in anticipation of PSVR 2. Omdia forecasts as many as 900,000 PSVR 2 headsets to be sold within the first three months of availability in 2022 – accomplishing a higher attach rate to consoles than the previous generation.

VR content revenue will grow from $1.1bn in 2020 to $4bn in 2025, when games will be responsible for 90% of the total spend. 360-degree and interactive video content initially showed a lot of potential, but companies struggled to effectively monetize their content due to the low headset installed base and lackluster demand. This led to several prominent casualties in the VR video production space, including the BBC VR Hub, Google Spotlight Stories, Jaunt, and Oculus Story Studio.

In the future, Omdia expects interactive video monetization to be driven by advertising and media subscriptions, as exemplified by YouTube and Netflix’s approach to VR. Social VR is another category which has shown potential, but it has experienced similar challenges to interactive video. Facebook remains strongly committed to its long-term vision for its Horizon platform, but it remains to be seen if it can create a truly compelling social experience in VR.