A list (with examples!) of practical design tools that I used during the development of my game Puppet Master: The Shadow Government Simulator.
Rafael Vazquez
Blogger
March 09, 2020

Humans have created art and entertainment since practically forever. Painting and music, for example, have been around for literally thousands of years. This has allowed them to really refine best practices; art has the golden ratio, music has the octave scale. This doesn’t mean every art piece has to use these, but it does lay a lens through which other creators can think of their work. All this makes a lot of sense, these fields have been growing and sharing knowledge for centuries. Video games on the other hand… well they’re still pretty young. 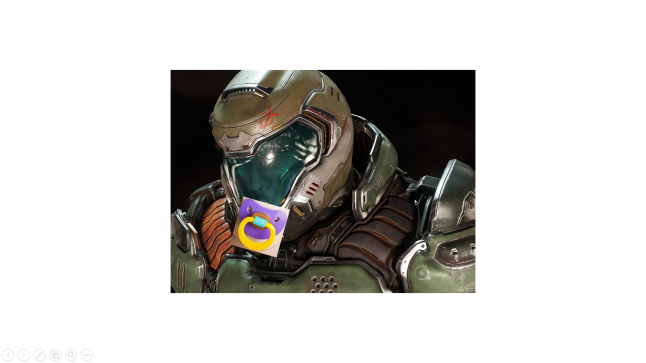 I'm not the first person to think this, and there are several very clever people that are working really hard to better the field of game design. I’m talking about the likes of Chris Crawford, Jesse Schell and Ralph Koster, among others. Their work is invaluable in creating a theoretical framework to better understand games as an art, and they have opened the field to a more detailed analysis of our medium.

That being said, I’ve found it hard to use this knowledge in the field. I haven’t met a manager yet that I’ve been able to convince to schedule time to design the ludemes for the game, or to analyze the mental framework players are forming as they enter level 2-2. This has left me a bit frustrated to be honest, I feel there are dozens of talks about narratology vs ludology, but few about practical game design advice.

So throughout the years I’ve become a tool collector of sorts; looking for practical tools that I can apply to my day to day projects. Several different developers have hit the same roadblock and have been awesome enough to share their work. Thanks to them I’ve been able to really improve my designs. Now I’d like to share a few that I used in my latest project Puppet Master (currently on kickstarter!) with you.

One note before we begin though; by tools I don’t mean engines like Unity. I’m talking more about conceptual frameworks that would help finding solutions to game design problems. These are not recipes to make games, just options we have when facing a challenge. There is no tool that will fit every type of game, every time.

With that being said, let's go!

Original Creator: SCRUM Methodology ( not sure the first individual to propose this, if anyone knows, please tell me).

Obstacle: Frequently when starting a new project, we’re still unsure of why people will want to play our game. There are tons of fun games out there, so just saying it’s fun won’t cut it. What value are you offering? 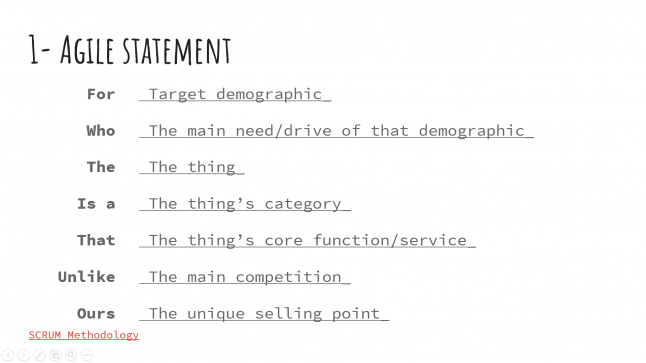 Tool: The Agile Statement is a compound phrase that helps us clearly define who the game is for, what the game is about and what makes it special. You just write down on a board the following words, and as a team fill up the blanks (sticky notes work wonders). This is a great way to start a project and make sure everyone is on the same page. 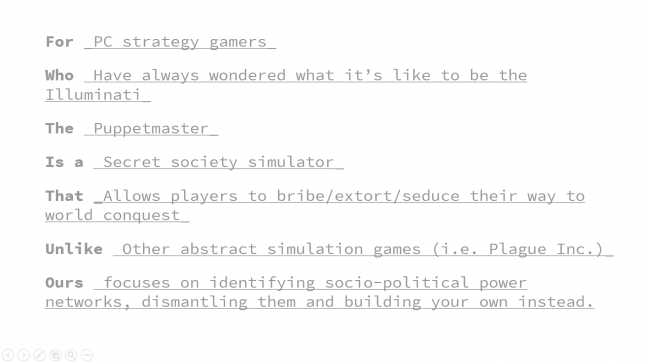 For Puppet Master the agile statement looks like this. Notice how not only do we talk about the game’s hooks (more on that later), but also our competitors and what our audience wants out of games.

Original creator: The first time I heard of this tool was from a mentor of mine Alexandre Mandryka. ​

Obstacle: Everyone has heard about the core loop of a game, but one thing this model doesn’t include is the fact that players are not necessarily always focused on the core action. They generally build on top of it to find other objectives at the same time, and as designers it’s important to make sure we have those planned out and in consideration. 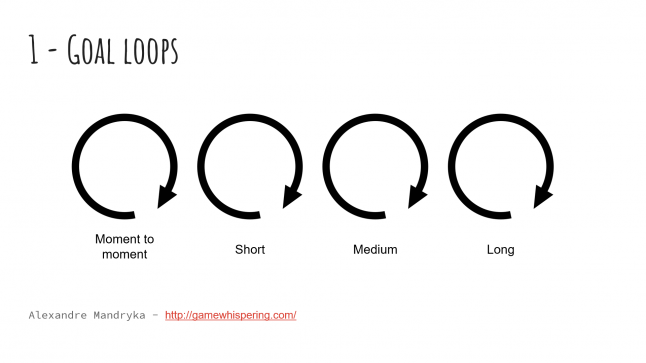 Tool: The goal loops are four circles (though I have seen 5 circle loops) that describe the player objectives based on the time they will spend achieving them.

The exact length of each loop varies from game to game. It is important to define these first. An arcade game might not necessarily have a medium-term goal (getting a high score would be their long term goal), while a 4X strategy game will not have a moment to moment goal, as there are no decisions at that scale. For example, here's what it would look like for Mario Odyssey: 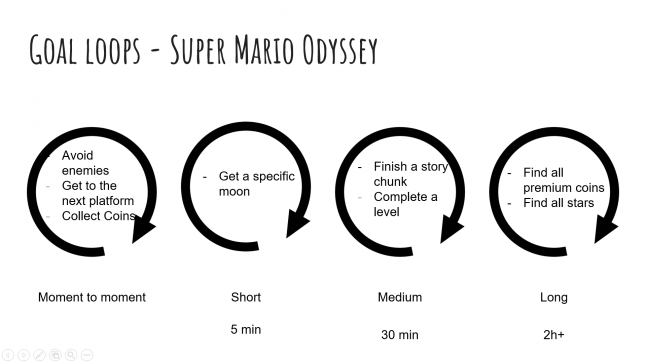 It is very useful then to determine what are the time frames you want your game to operate in and what objectives you are giving the player in each section. Sure they might make up their own objectives, but it’s still important to have some built in. 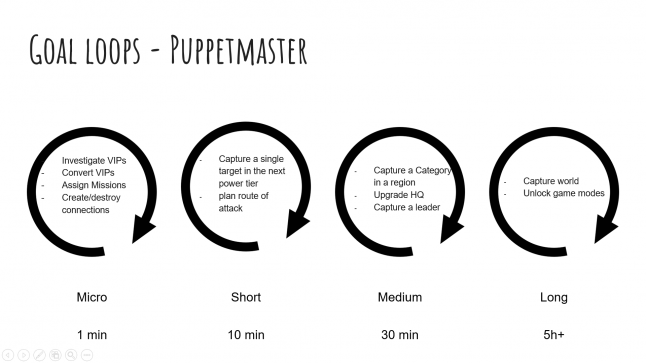 Puppet Master as a strategy game doesn’t have moment to moment loops, but it still has short minute to minute decisions. I, above all, want to avoid players not knowing what to do next and why they want to do it.

Obstacle: For complex games, it might be hard to have a holistic view of the whole system. We can imagine the different game mechanics, but we also need to be able to understand how they all affect each other.

Original creator: First I heard of it was in this article by Erin Robinson, where she attributes it to Steven Swink. 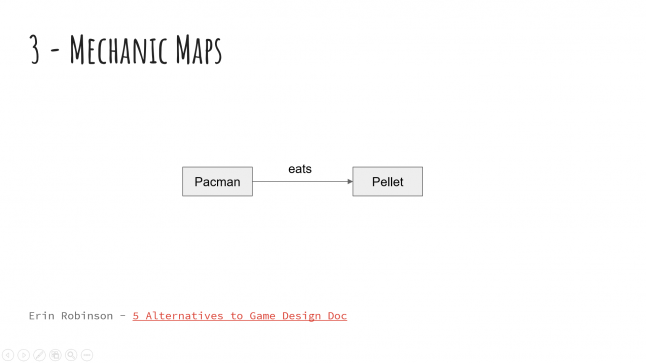 Tool: Mechanic Maps are basically a graph that depicts every mechanic/game system and links them by how they relate to each other. We do this over and over again until all major game systems are connected by their verbs. 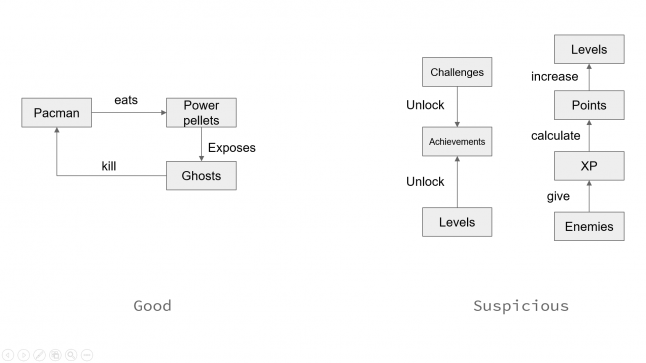 As we build it up, it allows us to find loops (which are good) and to find chains or dead ends (which are suspicious). Loops are good because they keep the game going while asking players to make decisions around them. On the other hand at a dead end, the game stops; this is not necessarily bad; for example they can be a mechanic that serves as a goal in and of itself (i.e. customization), but we do want to make that decision deliberately.  Chains don’t have this problem, but they might be unnecessary; we can probably prune some of these mechanics and reduce the scope of our game without affecting the game experience. 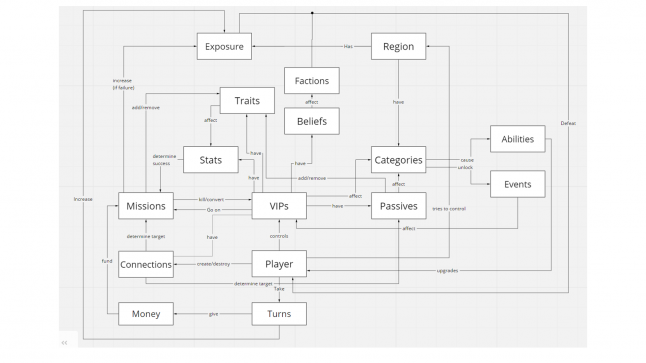 This is an early map I made for Puppet Master. I know it can be overwhelming so it’s ok to take your time :) It’s not uncommon for these to grow in size, what I recommend in that case is to have several lower level maps representing semi self-contained systems and use a high level one to connect those. Not all of these mechanics still exist, but when I had to remove one, it proved really useful to see which other systems would be impacted.

Obstacle: Every designer will face this challenge at least once. You are asked to create a large amount of variety for a game element, but you don’t have much time or resources to do so.

Original Creator: I took this from Chris McEntee's article on game design for Rayman. It’s a great read. So good in fact, these are his images as well. This tool is part of Ubisoft’s rational level design philosophy, although I’ve found it really useful for all sorts of elements (i.e. weapons, units, etc..) not just levels. 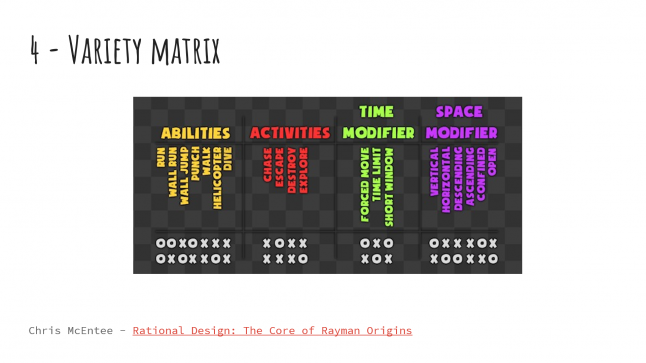 Tool: The variety matrix is a pretty powerful tool for this. Basically you list out all the different variables that affect the game elements on a table and then mix and match to create interesting combinations. If you have trouble thinking of variables ask your programmer, they seem to be thinking about this a lot. You can also have elements (i.e. gravity) cranked up all the way to infinity to have cool scenarios (i.e. no jump)

This is a Matrix I did for the unit’s abilities in Puppet Master. The idea is that each ability would have some positive and some negative effects, so it’s up to the players to balance them. The game eventually evolved out of this model, as it was too strict, but using the matrix was really useful in organizing my thoughts.

Obstacle: To truly understand how our game is viewed by players, we need to know what makes our game different from others and what makes them similar.

Tool: Hooks are basically any feature that makes our game special or unusual. It could be a famous actor, unique gameplay, interesting gimmick, etc… anything that can grab people’s attention. Anchors are their conceptual opposite; they ground players, making them feel familiar and in control of what’s going on.

The classic example would be Portal. It’s core mechanic (teleporting) and humorous writing, were pretty new and unique, and proved powerful hooks. On the other hand, the control scheme came straight from traditional FPS, anchoring the player.

Here’s the list I made of hooks and Anchors for my game. You’ll notice that they cover a variety of facets of the game, from mechanics to art to theme. This is on purpose; any game element can be a hook or an anchor. You might also notice that Illuminati is both a hook and an anchor, which might seem weird. In this case it can be both because on the one hand player’s don’t get to be the villainous organization that often in games, but on the other there’s no need to explain what they are about. The Illuminati want to deviously take over the world, because that is what the Illuminati do. It grounds players using knowledge they already have.

There you have it folks, 5 tools that I hope can be as useful to you as they have been to me. I love talking about this stuff, and there are many more tools where those came from ;) If you want to keep talking shop or if you have more tools for me to collect look me up on twitter or discord. As a farewell shameless plug, I am running a kickstarter for Puppet Master; you can learn more about it there and if it sounds cool to you, consider pledging and sharing :)

Thanks for reading! Let me know your thoughts in the comments below.