Writings on the Wall: Sharing Accessible Narratives Through Environmental Design

How can designers leverage the environment in their games to share accessible narratives to players? This article examines how The Last of Us, God of War (2018), and Inside create compelling narratives through environmental design.
Sukhraj Johal
Blogger
December 09, 2019

The original Dead Space is praised for its use of environmental design as a means to deliver compelling narratives to players. One such moment can be found within the opening act of the game when the player is aboard the derelict mining spaceship the USG Ishimura. The player approaches a dimly-lit room. It is covered with blood and guts; the iconic phrase “CUT OFF THEIR LIMBS” is smeared across the wall.  As a western audience, we generally get the gist of this phrase. It is a call to action!

However, let’s examine this scene in isolation from the rest of the game.

How would someone who is dyslexic interpret this scene? They may have a hard time reading the phrase. Or, someone like my mom may have difficulty with comprehension because English is not her first language. There may be opportunities where a person would probably glance at these words and walk away because they are unable to interpret the meaning. It can come to a cost in the game’s experience because they are missing an important piece of narrative and the introduction to a gameplay tutorial.

Traditional methods to create narratives such as fully rendered cutscenes are commonly used in the industry. But, they often pull players away from the game’s experience or may not be a viable solution for many developers, particularly indies. Tools such as localization exist but they are often costly to develop and may not reach everyone.

In general, making narratives accessible to different types of people is hard.

But, designers can leverage a powerful tool at their disposal. The Environment! Players interact with the virtual spaces all the time; they are perfect opportunities to interweave pieces of narrative.

Let’s look at four different ways that designers have used the environment to create accessible narratives:

1. Environmental Vista’s in God of War Make Players Relive Events from the Past

Environmental set pieces can be used by designers to share complex themes or narrative beats to the player.

The Ominous Face Etched On the Mountain

Early in the game, the player’s goal is to spread the ashes of Atreus’s mother on the highest mountain in Midgard. On-route to the summit, the player sees a human face etched on the mountain-side with black smoke coming from its mouth.

The human face is set up as a sort of “visual omen” or signifier of death. The vista warns travelers that the mountain is dangerous or cursed. The corpse of Thamur in Midgard is rich in environmental storytelling. While exploring this area, the player will learn more about how the giant lived, its culture, etc. Most of this information can be found from a closer examination of the giant's corpse by looking at its tattoos, clothing and jewelry. As players progress through the level, they can start to form a clear picture of who Thamur was before he died. This can all be achieved without the use of dialogue or cutscenes! 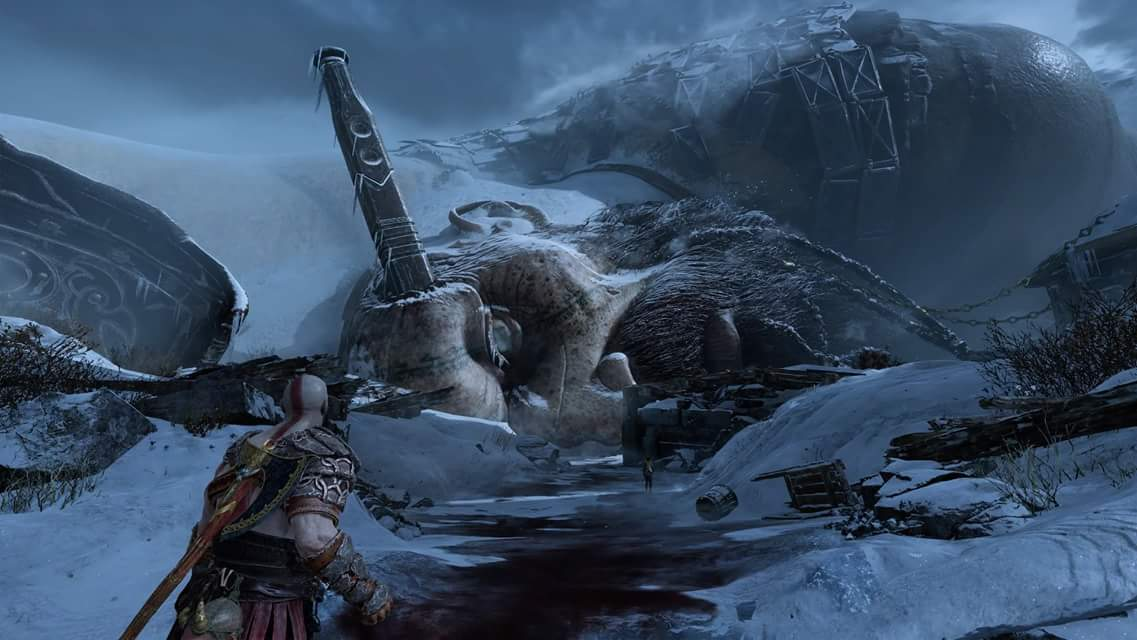 2. The Jötnar Shrines in God Of War Speak a Thousand Words

Visual symbolism can be used to communicate events and the passage of time.

Jötnar Shrines are triptychs (three carved wooden panels) that share stories of the Giants. These shrines are scattered throughout the game and often reveal notable events of the past or prophecies of the future. The shrines can be seen as a sort of “picture book” to players. If we take a closer look at the images depicted on the shrine, then pieces of a narrative start to form. Looking at Jörmungandr’s Jötnar Shrine, a player can start to ask themselves questions. Triptychs are a super accessible format to share stories. They use visual imagery and symbolism to share narratives that are not bound by language for the player to interpret its meaning.

3. The Last of Us Constantly Makes Players Put On A Detective Hat

Detective work allows players to actively piece together a narrative from an arrangement of props within an environment.

The Last of Us does an excellent job of presenting environments that make players curious to know what happened in the past. Let's look at the Collapsed Tunnel scene for instance. There is a truck blocking a section of a tunnel from a horde of clickers. This simple composition of environmental props makes players ask questions.

How did this happen? Were they protecting themselves? Did the people survive? 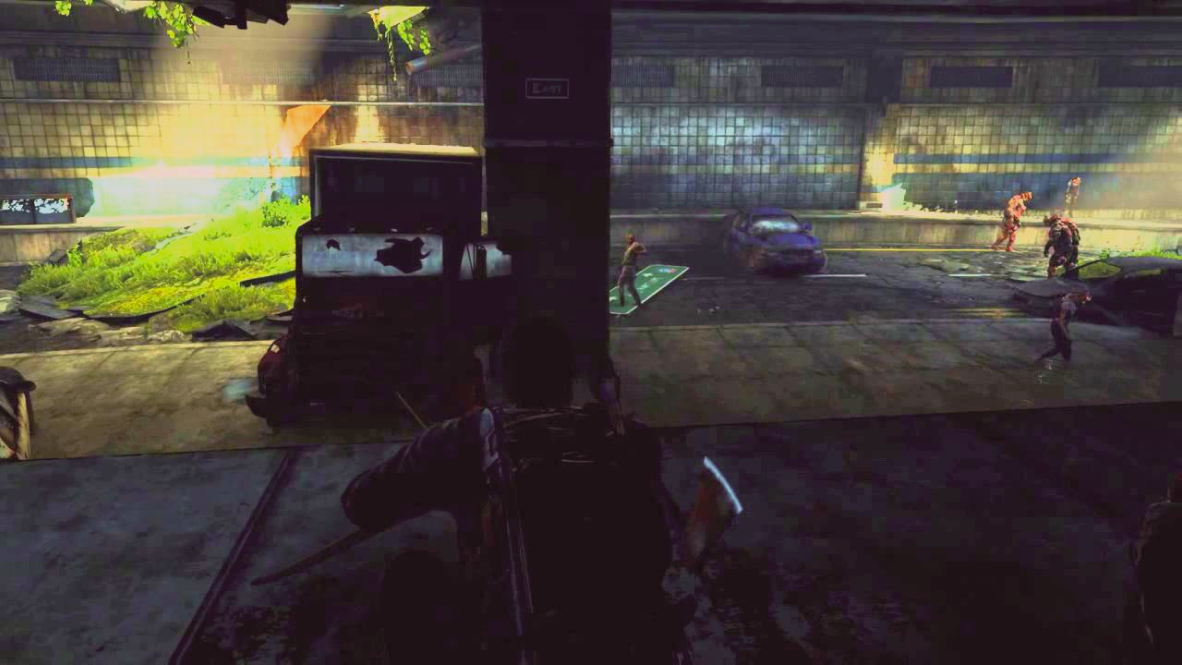 Many “staged areas” like this one are scattered throughout the world of The Last of Us. These areas often invite players to take an active role in interpreting remnants of the  past in order to determine a cause and effect. ​ 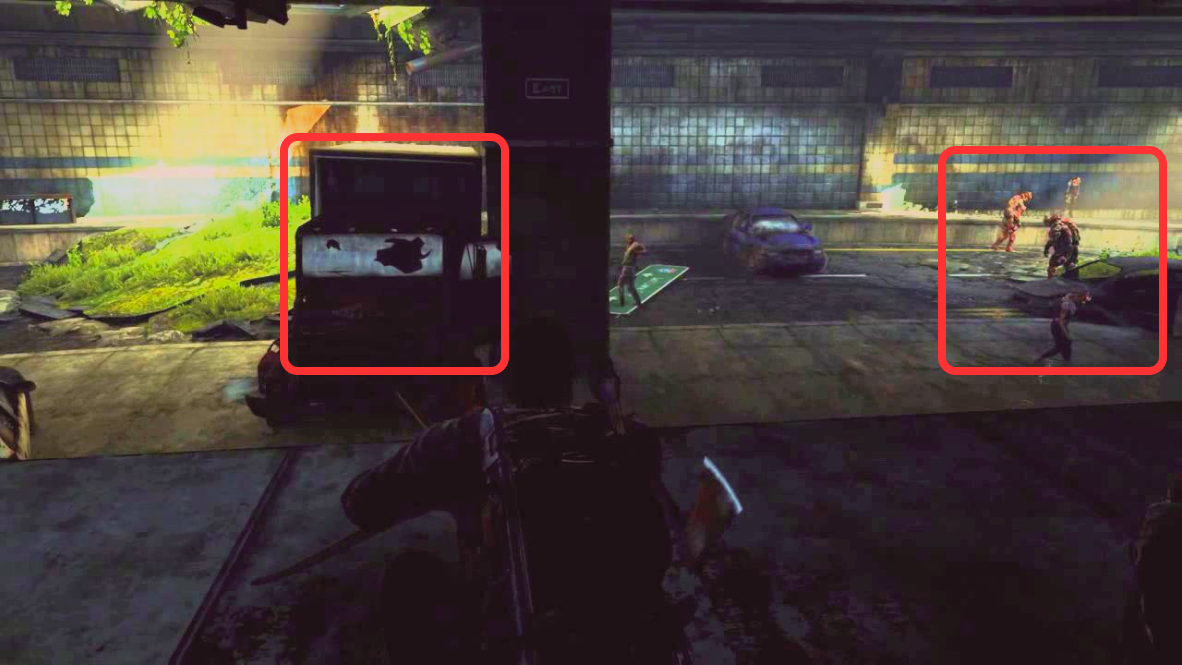 Let’s look at another example, where the player is going through a Quarantine Zone and encounters a small settlement of survivors. At first, it seems that the survivor behind the food stand is cooking meat and selling it to others.

But, upon a closer examination, clues start to pop up. The player forms the conclusion that the survivor is serving rats as food! This simple arrangement of props imprints the struggle that these survivors are going through in the player's mind. ​

Environmental hints often provide insight into how the world of The Last of Us operates, the struggles that people go through, and to what lengths they go to in order to survive.

Lighting is an excellent tool for setting a certain mood or tone, which can lend itself to how a player should feel in the moment.

Looking at Playdead’s Inside, lighting is not only a tool used to guide players through levels, but it plays a strong role in communicating an abstract narrative. ​

Cool Artificial Lights that are emitted from flashlights or electronics force players to stay in the shadows. It often creates a sense of uneasiness. This lighting composition feeds into the player's primal response to fear the unknown. 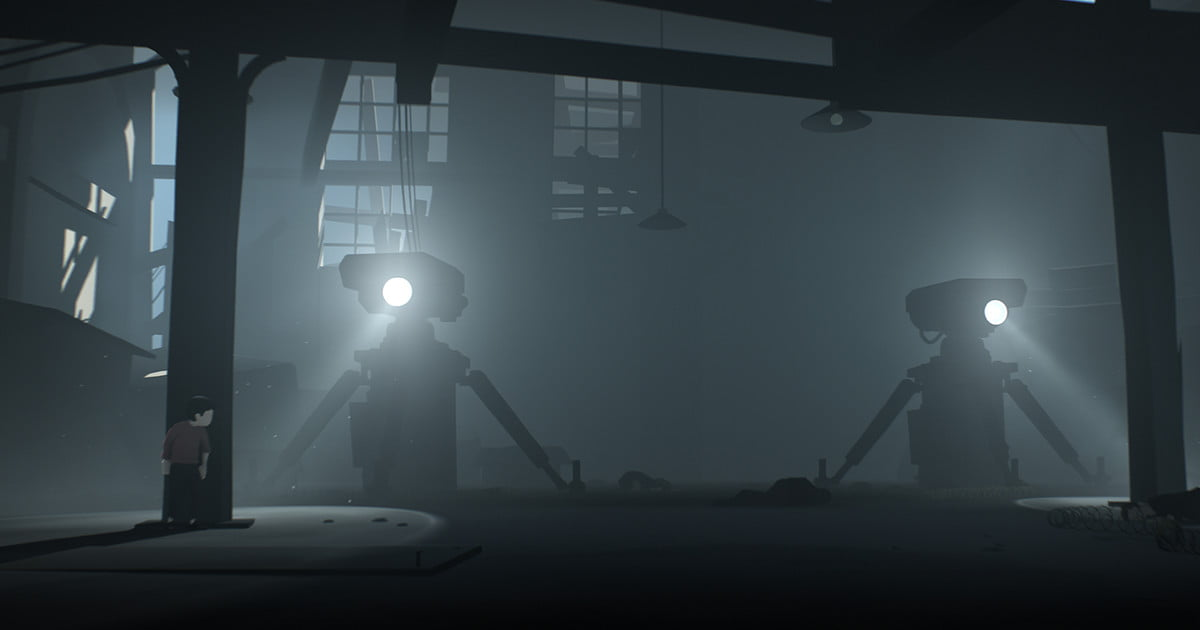 Warm Natural Lighting provides a sense of comfort. It motivates players to move away from the shadows. It often foreshadows that a positive event will occur, whether it be solving a puzzle or escaping from an existential threat! Making narratives accessible is super hard! There is no one size fits all solution to create stories that can be interpreted by different types of people. However, designers can leverage the worlds they create and continue to push the need to interweave pieces of environmental storytelling.

Environmental storytelling is such a powerful tool because designers can create narratives that are not bound to the banter between two characters or an expositional dump from a cutscene. It can often transcend the traditional forms we communicate as people through language. It allows players to take an active role to be apart of the fantasy the game world creates.