Writing history for winners (and losers) in Age of Empires IV

Beloved PC video game series Age of Empires got a long-awaited refresher with the release of Age of Empires IV, a new game from Microsoft and Relic Entertainment that revitalizes the history-based real-time strategy game with a fresh look, more units, and a new take on telling historical stories.

In ye olde days (of the late '90s), Age of Empires campaigns were built on point-of-view stories that had players leading the armies of favored historical figures like Joan of Arc, Saladin, Montezuma, and beyond. With text, 2D art, and, later on, voiceover, the games worked to try and tell the stories of these historical moments from the perspectives of people who lived through them.

Age of Empires IV, however, plays out like a documentary--and that's not just because Relic teamed up with Lion TV to produce micro-documentaries that introduce each mission. Each level of the game's campaign is a guided experience narrated by voice actor Victoria Weisslinger, and mission design has become even more abstract to better focus on certain historical principles.

It's a great new approach, and one guided by Relic narrative lead like Philippe Boulle and narrative designer Lauren Wood, who sat down with Game Developer to discuss their approach for bringing history to life.

Right off the bat, Wood gave a great example for how the Age of Empires IV narrative team wanted to guide players through real historical moments. She described both the between-mission cutscenes and Hands on History videos as being similar to the British talk show Top Gear--a bit of fast casual history, if you will.

"You don't necessarily have to be a car fan to enjoy Top Gear to watch it all the time, because it was a fun show," she explained.

The game's voice certainly feels in line with something you'd hear Richard Hammond or Jeremy Clarkson say (minus the racism). It's got that sense of casual authority and sincere passion that means it can structure missions around explaining the hyper-specific strategy driving the Battle of Hastings.

Sometimes history is best told by focusing on characters, and sometimes it's best done by making complex ideas like staging a cavalry charge approachable. "History is only as exciting as the person who teaches it to you, right?" Wood quipped. "We had those two ways we were going to deliver the history--one is the storytelling component, and the other one is getting into those details of how everything happened."

Though production of the documentary footage was Lion TV's job, Boulle and Wood described how Relic still had to work hard to make sure the flow of gameplay and in-game voiceover could work in sync with the documentary footage. "It was very different and strikingly the same as working with in-engine cinematics," Boulle explained. "It was different because the actual skills of doing it are quite different...but it was similar in that the timelines are so different from the development of actual gameplay." 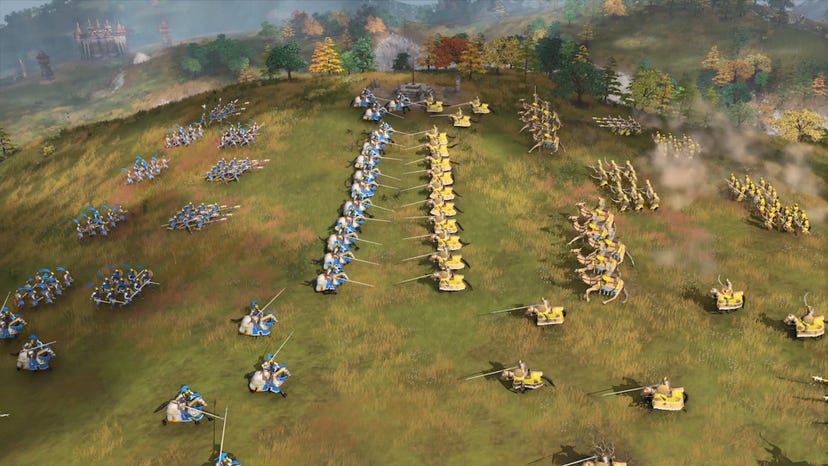 "You need to make decisions really early--it's the same with when you're having to do motion capture and performance capture. Then you know, narratively, [those decisions] become these concrete pillars in your narrative."

That's because obviously, anything filmed and captured in those early days isn't going to change. Development features can change around the cinematics, but the videos produced by Lion TV will show modern-day Hastings, the Moskva river, etc.

"Having to pivot around those things that are fixed was creatively useful in some ways," Wood added. "In game development, we can sometimes go down a rabbit hole of continually iterating and changing, and that is usually how you get to the best result."

"But to have some stakes in the firmly in the ground and say 'no, this has to be this battle, because the film is fixed,' is helpful."

A challenge with this structure of storytelling is that by portraying a higher level presentation of what actually happened, the team then has to figure out what motivates player choice and individual thinking as the campaign progresses. Boulle said the team's goal wasn't to make a game where players were "walking through the footsteps of history without any choice."

In open-ended scenarios, the team would research decisions faced by historical figures of the moment but still allow players to not make the decisions those figures did. In the second mission of the William The Conqueror campaign for instance, players suddenly find themselves beset by Viking raiders. Said raiders will gladly stop hitting your army's flank--if you're willing to pay the Danegeld, of course.

But rather than forcing players into the game's trade menu, the choice was left open for them to just choose violence. "It's a representation of this particular period of conflict, and how these people were aligned against each other," Wood said.

(And fun fact, your humble writer is allegedly a descendant of good ol' Willie himself...one of millions, no doubt).

History is "written" by the winners (mostly; apologies to the phds reading this), but conquered people are still around to tell their stories today. Age of Empires has a decent history of...well, trying to do right by history, but a game about conquering and civilization-shaping violence is still going to run into how that violence matters today.

"This was something we thought about almost every day," Boulle said. "History is an evolving thing. It's something where our understanding of 'what happened' and 'why' and 'what people were thinking,' and 'how they felt' changes as new people look into it."

"There have been historical narratives that were very popular that have marginalized some people or appropriated by different people, and we wanted to be as true to and celebratory as the humans involved as we could."

Boulle said trying to keep one step ahead of inoffensive, one-sided narratives meant consulting with historians, cultural specialists, linguists, and more, all of which fed into the documentary perspective that could speak with a distance from the different sensibilities of world history.


"History is an evolving thing. It's something where our understanding of 'what happened' and 'why' and 'what people were thinking,' and 'how they felt' changes as new people look into it."

Since conquest is one of the key mechanics of Age of Empires, the team took opportunities where it could to highlight how the hero of one history could quickly become the villain in another. One mission in the Mongol campaign has players laying siege to Kiev with the armies of Batu Khan. Khan originally sent envoys into Kiev to demand the city's surrender--but they were killed by the city's authorities.

Khan's response--and the player's mission--was to raze the city to the ground. "While we're not saying that was the right thing to do--it's a tragic situation--we are exposing how these two cultures saw each other very differently, and reacted in a way that led to aggression," Boulle explained.

Wood had another example focusing on the people who would become modern day Russians--the Rus. As a narrative designer, she found herself facing two challenges--the team had just been working on the Mongol campaign, where the Mongols were the heroes, and now in the Rus campaign, they were antagonists. And she herself wasn't an expert on the conflict.

This campaign--focusing on the founding of Moscow--eventually puts players in the shoes of Ivan III, the conqueror who united different Rus territories under one banner. But Ivan's unifying efforts were not welcomed by the people of Novograd, an independent republic that resisted his efforts until the city fell under siege in 1471.

"You're facing this moment in time where you know the goal is to consolidate your power to be rid of the Mongol overlords...but in order to this, you have to effectively subjugate this independent republic and bring them under Moscow," she said. "You're fighting against other Rus in the interests of some greater goal."

Wood called it a "delicate moment" to handle, saying that the documentary style helped take the narrative team out of their modern judgment, and try to offer as many perspectives to the player as possible.

This kind of compassionate process for history comes through in the final product. A bit of distance, and a recognition that violent political strategy has violent ends, helps add context to the classically fun strategy shenanigans that can also be used to turn history on its head.

To close out our conversation, Boulle reiterated that throughout development, the Age of Empires IV narrative team was conscious about how history is discussed today. "It was critical for us to always remember these cultures we're celebrating," he said. "All these people we're celebrating echo today in a lot of different ways," he said, and without a perfectly timed beat, added "I say speaking to an [alleged] descendant of William the Conqueror."

"People see themselves in this history, whether it's because they have familial connections or cultural connections...that's why I love history. It's getting at our common roots, and also what makes us unique, and diverse, and special."