Windfall is a strategic trading card game that pins Guardians (players) against one another in an epic battle of survival.
Game Developer
Staff
February 08, 2014 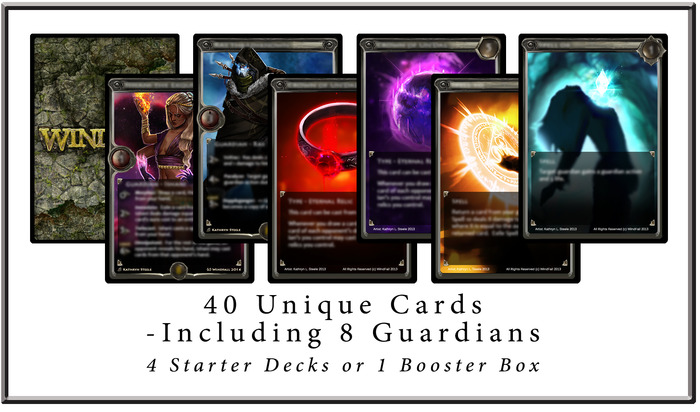 Windfall TCG is a game that pits Guardians (players) against one another in an epic game of survival. You, as the player, become a Guardian of your choice, and you must do whatever it takes in order to outlast your opponent. To break down the game, in its simplest form: Defeat all Guardians on the opposing side of the field. Easy, right? That depends on the type of player you are. We have developed this game to be easy for beginners, but while still having the capability to be severely competitive for those who enjoy a more strategy based play style.

In a system where your Guardians survival is the key to winning the game, they must cast spells, relics, and summons, as well as rely on their own unique abilities to come out on top. This is not a game about being the strongest, but trying to outlive your opponent.
Inspire by the workings of Magic: The Gathering and Final Fantasy, Windfall combines several mechanics that we know and love to create a one-of-a-kind play style all its own. With 40 unique playing cards, eight of which are the infamous Guardians, players have the ability to design their own decks or to play with the starter decks already prepared for easy pickup. It is a game where the player truly crafts their experiences.

Right now, Windfall is in the production stage with a debut launch date of May 2nd. The creators are offering Kickstarter exclusive rewards to backers as well copies of the game for backings of $50 or more. Rewards even include signed prints by the talented artist Kathryn Steele! This husband and wife duo have years of experience working with, designing, and drawing for games and are now putting their heads together to bring Windfall to life!

Windfall is a great addition to any card player’s library and a great enjoyment to any competitive TCG player. Play in a Pseudo- Synchronous play formand topple your opponent by force.