Answering the insidious question "WHY?" creates stronger settings, both mechanically and narratively -- as if you could even separate the two somehow.
Droqen is who I am
Blogger
June 17, 2013

'Immersion' is a difficult word. On one hand, the barrier between fiction and reality is clear; the events in a piece of fiction are not actually happening as you experience them, and mostly everyone understands and accepts that. On the other hand (of course there's another hand), the barrier is fuzzy! We empathize with imagined characters who have no place in our lives except through their stories. But, really, does anyone or anything? Hearing a story about a stranger on the other side of the world is about as removed from our lives as any fictional story set in our world is. Anecdotes can be embellished upon or entirely fabricated -- at least fiction has the common courtesy not to claim its lies are true.

In the end, it really doesn't matter. We react to things that happen near to our bodies or our minds, and we react differently to hearing stories. Sometimes these stories are about about real things that happened -- and we either respond to it (like if we're told someone close to us is hurt) or we don't (like if we're told someone we don't know is hurt, and we really can't do much about it) -- but other times nothing actually happened, and they're just stories, anchored in nothing.

We care about what happens in fictional contexts.

To experience a piece of fiction is to hold on to a slippery, struggling fish by the name 'Immersion'. The problem (that I have, anyway) is when a book, or a movie, or a game, does something so obviously fictional that I can't help but drop the fish and remember that this is fiction. I might be holding a book, but these moments are worse for immersion than the actual experience of holding the book and having to read the words, or being reminded with every page I turn that I'm just reading ink on paper.

The thing that always gets me is the answer to the question Why?

Sometimes things can be (and are) explained within the (fictional) universe. For example, 'Why is Alex so focused on getting through that door?' might be answered with 'It's because Alex's best friend is trapped somewhere behind it.' Sometimes it isn't obvious why events happen and other times it is. Everyone asks different quantities of Why?; they ask it of different things and go to different depths. Why? builds immersion and breaks it, depending on the answers we come up with. Oh, yeah, that's where it starts to get tricky -- if you don't answer it for us, we fiction-bathers have to answer our own whys.

It doesn't matter what you do, as a creator: eventually, you will always need to answer a Why? to which the only answer is 'because I (or we) wanted to do it that way'. Anyone who asks why enough will cross this strange barrier. Before long, the why can no longer go deeper in a fiction and instead are directed at the author; the questions cease to be 'Why did A kill B' and start becoming 'Why did you make A kill B?'

Up until this point, I'd like to think this all applied to every sort of fiction -- every sort of story. However, I am a game developer. I read books, I watch movies, but I know games. I stare at them until every why is answered, or until I tire of it and quit. So the rest of this will at least be written from that perspective: in context of games. 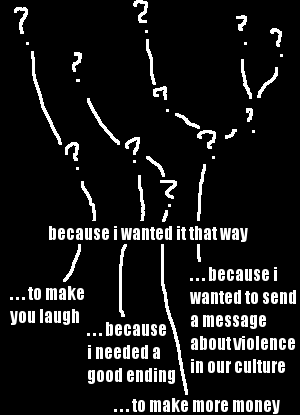 Because It's A Game, Stupid

Here are some terms to watch out for: 'tropes', 'plot holes', 'game-isms'. When noticed, these things immediately bring to the surface the answer: 'because it is not real'. Immersion is not about smothering that answer completely (an impossibility in fiction, as defined), but rather using it sparingly, as little as possible.

Games have new power. They can incorporate outside elements into them, through human interaction. Suddenly, the tree is a little more complex when not everything passes through the filter 'because I wanted it that way', but occasionally (or often!) passes through a different one too: 'because you wanted to'. The answer to Why did Alex kick that door? can be Because you wanted that to happen.

Suddenly, a creator's intent does not define everything. We don't have to create static, curated spaces anymore. Games -- not just videogames, but they've flung several doors open -- can do something new by acknowledging desires and responding to them.

The title of this article is lying to you. Some watches are water-resistant to a certain number of feet, but no watch can be waterproof; likewise no videogame can be whyproof. Nothing created can answer why forever.

In a previous article, The Arbitrary or Authored Loss of Control against Perfect & Natural Avatars, I talked about how taking control away from a player "detracts from [her] sense of self in a game world". 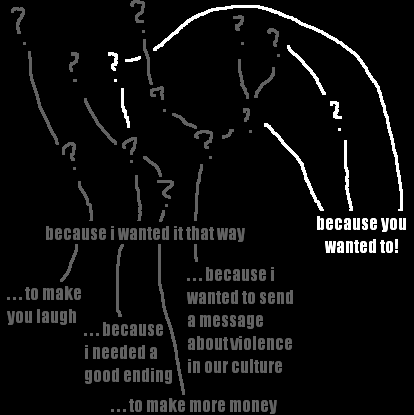 When there are so many things that happen, there are at least as many questions to be answered and every time you take from the player the ability to answer a question for herself, you're rejecting the natural whyproofing that games have.

This isn't the only important thing to consider; in the gamasutra posting of that other article some legitimate questions were raised: why can't Alex just push the door open rather than kick it? The only answer I have to this is 'because I made it that way'. The example of a three-entity room was not a good one, because without content there's very little padding to the question of Why? 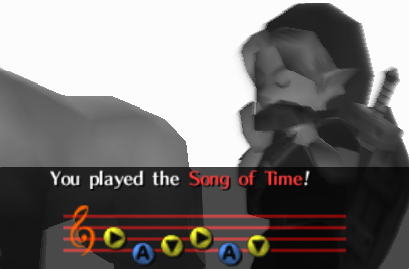 When you die in a game, you don't die in real life. Death is handled naively by just about every game -- when you die, you come back at the last checkpoint, or you jump back to the last time you saved (... because it's a game, and that's just how they are). So, some games get around it by avoiding death! Others give death a reason; that wasn't really a death, it was a mis-told story (wait, that's not how it ended...) or merely a vision of what might have happened but actually didn't.

Sometimes the answer is permadeath.

Braid handles death easily, with the very ability upon which the game focuses. If you can rewind as much as you want, whenever and wherever you want, death means nothing. Majora's Mask handles death by trapping you in a time loop: it doesn't really matter what you did in life anyway, so why should death matter? When you run out of hearts, you're thrown back to the beginning of the loop again, just like Groundhog Day. In Dark Souls, you're accursed, undead, doomed to return death after death to the world of the dead where you're trapped.

A problem that so many games with scripted and timed events have is that, if you miss one, you can play again with new knowledge. What I mean is that if a certain character needs you at a certain time, it makes the world seem more alive but if you learn that information too late... you come face-to-face with the nature of the game you're playing by reloading a past save file or by remembering it for the next time you play through the game. In Majora's Mask, the story goes like this: in three days, the moon will destroy Clock Town and everything nearby. You will die if you don't save Clock Town. You find the Ocarina of Time and learn the Song of Time, which allows you to rewind to the beginning of 'the first day'. You need to do this many, many times over to save the town.

Clock Town is absolutely full of characters running around and doing their own things, and their schedules change from day to day. On the third day, for example, several people have abandoned the town out of fear for their lives (the moon, you see, is frighteningly close at this point). The town is not as evacuated as by all means it should be because the three leaders of the town are still in heated argument about whether or not the town should be evacuated.

Some things only happen once, and missing them is inconvenient but you've never missed them forever. Rewind, and everything plays out the same as it ever has. Majora's Mask is good at answering some whys that other games don't answer at all, but it doesn't answer all of them. You can madly swing your sword at townsfolk and it doesn't affect them. Why not? (Maybe it's because if you could attack them it'd create too many branching lines to really consider; or it'd raise more whys if not all of those branching paths were dealth it; but it is, pretty simply, because the people who made the game didn't want to or couldn't allow it. Games are finite.)

When it comes to answering Why? in satisfying ways, you have to pick and choose your battles. Games are simulations, not reality, and defined by rigid rules. Consider everything and if there's no reason for something to be a certain way, consider changing it to something more harmonic -- or come up with a reason, maybe hint at it. There are a million things to consider when making a game, and being whyproof is only one of them.

Being immersive and being whyproof are very similar (they might almost be synonymous but I won't make that lofty claim), very slippery, and they're sometimes about answering why, and other times just about making the why-inducing problems so small that nobody thinks to ask.

Ask yourself why, constantly, and don't accept "because that's the way it is, for a game to be like this", not even from yourself. Maybe all you do to explain your save points is make them cute frogs that remember the story of your adventures; or maybe the idea of nothing dying for real, not really, fits perfectly into your universe.

Ask why there are characters who literally do nothing except sit (or stand! not even a chair!) in place, selling items to one person (the player) whenever they happen to come by.

I make little games without many characters, because I'm one person who runs out of motivation quickly and would die answering all these whys. I think that 'loneliness' is a feeling many indie games go for because it's a quick and easy way to answer every why about 'other characters are static and weird' by simply not including them.

I’m going to wind to a stop here, and just conclude by telling you that you don’t have to answer every why (it’s impossible! remember: watches are never waterproof) but it can be both fun and incredibly setting-strengthening to answer a few of them, whether that's with whimsical in-universe justification (Mother 3's Save Frogs), by granting strange abilities (Majora's Mask's and Braid's rewinding), through exclusion (lonely settings with no other characters -- as mentioned previously), or using any other method you can imagine.

Ask yourself Why? until your answers satisfy you.