Cultist Simulator devs Alexis Kennedy and Lottie Bevan speak to the highs and lows of designing games around cards, the value of a minimalist interface, and walking the tightrope of indie game dev.
Phill Cameron
Blogger
May 22, 2018

Failbetter Games has always been a studio with a distinct style.

Failbetter co-founder Alexis Kennedy left the company in 2016 to start his own indie studio, Weather Factory, alongside his partner Lottie Bevans. It’s on track to release its first game this month, Cultist Simulator, which allows the player to be the antagonist in a Lovecraft-esque story. You read mysterious tomes, unlock dangerous lore, and have abstract visions in a quest to start your own dangerous cult.

Despite the shift in studio, however, Cultist Simulator reads a lot like it comes from Failbetter. The world of the game is more akin to ours than the fantastical underworld introduced in Fallen London, but it still has those aforementioned trademarks dialed up to a whole other level. The UI is even more minimalist and the card system is front and center. While Failbetter’s games incorporated more artwork and animation over time, Cultist Simulator shows Kennedy going back to the basics, with as little visual flair as he could muster for a primarily visual medium.

Game design as house of cards

Kennedy has been using cards as a medium since Fallen London, the in-browser role-playing game about an underground city where secrets are currency and otherworldly creatures are commonplace. It’s become somewhat of a pattern among Failbetter’s games, and for a personal reason.

"As soon as you give somebody a table with cards on it, they expect to be able to pick them up and move them around...They are things that you can expect to be meaningful but fundamentally disposable. They come and go."

“I think I'm a very abstract, verbal thinker...I can't put two colors together on a page let alone design an attractive interface. I tend to think in terms of words and symbols,” Kennedy said during an interview earlier this year.

The strategy made sense when it was just him making games. Nowadays he can hire UI designers or rely on Bevan, who’s the more artistically-inclined of the duo. Back then, Kennedy utilized what he knew to make the things he wanted to make.

According to Kennedy, cards, even virtual ones, have physical qualities. Most players have played a card game, and each has similar traits. Cards are tangible, but chaotic. Drawing one represents chance or a gamble. Whether you’re playing with a basic 52-card deck or a custom one like in Monopoly, what’s on the other side can change the course of a game. Similarly, in Fallen London, a deck of cards compiles possible outcomes for player actions.

Cultist Simulator goes one step further. It’s nothing but cards, creating the most minimalist interface Kennedy has worked with to date. Here, they represent verbs, places, books, characters -- just about anything that could affect a game’s outcome, but also the course of the game itself. 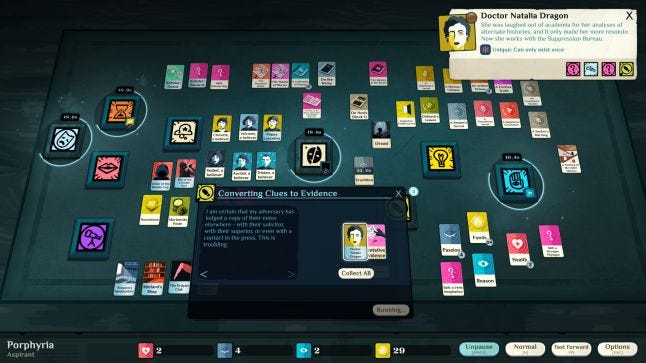 The game opens up on an empty table. Your first round will have you playing an “Aspirant,” a generic person alone in a city looking for work. You begin with only one card, which you place in the “work” section. This earns you your first resources: health and funds. Over time, as you work more hours and gain more money, more cards become available, opening up avenues for exploration and study. By combining different cards, the player unlocks new lore or resources that they can use to create a cult, earn money, or explore the dark arts. Weather Factory takes inspiration from RPG crafting systems, allowing players to use trial and error to find the perfect combinations, to increase their stats, and to become a master of evil if you so choose.

It’s that tangibility and randomness that allows Kennedy to use cards in his interfaces, sometimes creating games that revolve entirely around them.

"We are very interested in doing experimental things while keeping costs low so that we can continue to do interesting indie experimental narrative things."

“They have a lot of really practical qualities,” he says. “As soon as you give somebody a table with cards on it, they expect to be able to pick them up and move them around. They have the idea that they can arrange. They are things that you can expect to be meaningful but fundamentally disposable. They come and go.”

Cultist Simulator’s cards are constantly moving. A lot of resources and actions have timers that pick up the pace of the game. When the timer on something like Contentment runs out, the card will burn up. When the player dies, whatever the cause (starvation, illness, etc) will dramatically explode. Other resources, like funds, will quickly be eaten up by mechanics like the passage of time, which automatically takes a fund card every 60 seconds or so. The game is therefore able to maintain its minimalism and not overwhelm the player with stacks upon stacks of cards. It’s also able to be dynamic in a way that card games in the real world aren’t. As you ponder which actions to take, the ticking clock raises the tension. It’s easy to forget that you’re only playing around with cards. 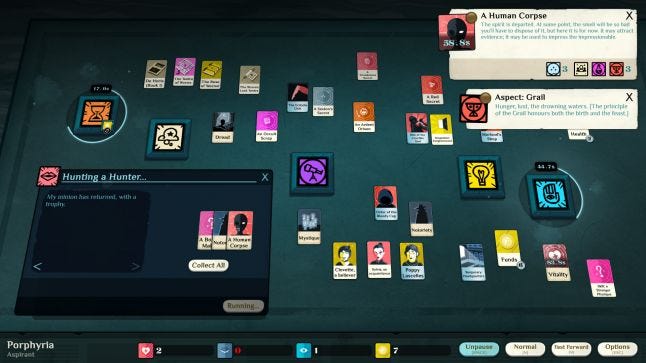 The UI design is also intentionally minimalist in order to create an immersive experience for the player. The term “immersive” is overused, but Bevan said that just having Cultist Simulator revolve around a table has an added effect.

“You will be able to mesh together an understanding of this very deep, very complicated lore in the same way that the scholars of Lovecraft are actually doing in fiction,” she said. “They're the ones that are breaking their backs over grimoires trying to discover the key into the manses. And that's actually what the player's doing here, along with the character inside the game.”

It also works to isolate the player in a way that mirrors how their character might be isolated doing this dangerous work. Kennedy and Bevan want you to have fun and get engaged with starting a cult or sacrificing a person to a higher power, but there’s still a lingering sense that you’re the villain in your own story.

“Remember that you are in this dark room moving cards around on a table, which implies at least to me that you are some kind of lonely, maladjusted person in the privacy of their own room living out this much more fulfilling life,” Bevan continued. “It's really sad but it's also quite abusive in terms of what you're doing because you're just moving these things and people around as though you can do whatever you like with them. I think it all thematically adheres.” 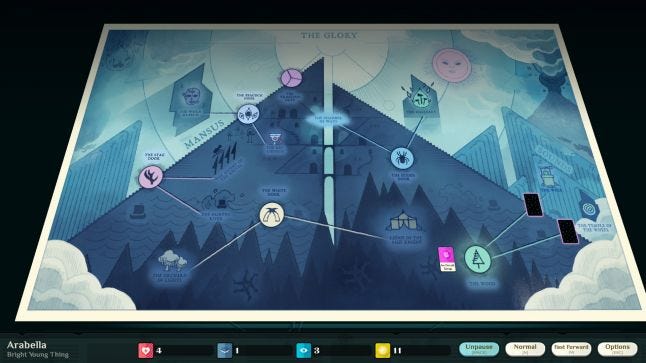 However, besides all the thematic and mechanical implications of a minimalist UI, Kennedy asserts that a lot of the studio’s reasoning for utilizing it is practical. Kennedy left Failbetter for a lot of reasons, but one was that he wanted to experiment without the risk of bankruptcy. Working for yourself at an indie studio allows you creative freedom, but there’s a financial risk to do that in an already-crowded indie market. Weather Factory is a small team and this is its first game. Not only does minimalism help to keep costs down, but it makes it easier to play around with new ideas.

“You don't want to do a five-year experiment or get lost in the weeds,” Kennedy explains. “We are very interested in doing experimental things while keeping costs low so that we can continue to do interesting indie experimental narrative things.”

The UI will scale for Weather Factory. Depending on sales, the studio hopes that they can continue to release DLC, localize it for other communities, and to overall spread Cultist Simulator’s reach. Kennedy’s traditional minimalism helped to establish Failbetter, so the hope is that it can help with Weather Factory as well.

“So this is an opportunity for us to play around with that and see if we can bring [Kennedy’s] beautiful words to a new market,” Bevan adds. “And it also enables us to do a Paradox DLC model. We're planning on releasing what are essentially decks of cards which will revolve around adding new roles to the game. And I hope that will scale relatively well."